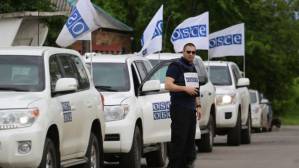 The Organization for Security and Cooperation in Europe (OSCE) is demanding unfettered access across eastern Ukraine after one of its monitoring missions there was threatened at gunpoint by Russia-backed separatists.

Alexander Hug, the deputy chief monitor for the OSCE monitoring mission in Ukraine, told RFE/RL that failure to prosecute those responsible for such attacks would only invite more.

He said that if the monitors were prevented from carrying out their work, there was little chance of resolving the conflict in eastern Ukraine, where more than 9, 400 people have been killed since April 2014.

"If we can’t do our job as monitors, it will be very difficult to assist the sides in finding the path to swift normalization in the eastern part of the country, " Hug stressed.

The OSCE said a team from its Special Monitoring Mission (SMM) was stopped by two armed separatists near the separatist-controlled village of Lukove in the afternoon on July 29.

This occurred, the OSCE said, while the monitors were following what the mission said were fresh tracks, likely left by an infantry fighting vehicle.

The separatists blocked the road with their camouflaged jeep, pointed their guns at the monitors, and ordered them to leave the area, according to the OSCE.

As the group of monitors was leaving the area, another separatist jeep appeared, traveling at top speed. It almost hit the lead vehicle in the SMM convoy before coming to a stop in front of the patrol, blocking its path.

The OSCE said one separatist made a "cut throat" sign to the monitors and took photographs of both SMM vehicles and the drivers.

The OSCE monitors were led to a separatist checkpoint in Prymorske, some 5 kilometers south of Lukove.

There, according to the OSCE, nine armed separatists surrounded the first SMM vehicle, swearing and making threatening gestures. One of the monitor’s vehicles was dented after a separatist hit it several times with his rifle butt.

The monitors were eventually released and returned safely to their base in Mariupol.

Hug said there had been "no concrete feedback" from the separatists regarding the latest violation, which the OSCE official stressed was not an isolated incident.

"We’ve had, of course, our patrols shot at previously. We had patrols be under crossfire, including involving artillery, " Hug explained. "We had our colleagues being kidnapped earlier on, in 2014, when eight of our colleagues were taken and held for over a month. So, there are, of course, different scales of incidents."

On December 5, 2015, the OSCE said, armed individuals guarding heavy weapons in the separatist-controlled town of Yurivka in the Luhansk region fired into the air as SMM monitors tried to approach.

On April 7, 2016, the OSCE said an SMM vehicle was hit by a bullet not far from Snizhne in a separatist-controlled area of the Donetsk region. The same day, the OSCE said a SMM vehicle was stopped on a highway checkpoint north of Smile in a separatist-controlled area of Luhansk. In this incident, a monitor had a gun pointed at him from a distance of about 7 meters.

Just two days later, on April 9, an SMM patrol including five monitors and travelling in two armored vehicles was in Zhovanka, a government-controlled part of Zaytseve (50 kilometers northeast of Donetsk). The SMM was accompanied by Ukrainian military personnel. According to the OSCE, a mortar was fired in the direction of the SMM, followed by small-arms fire. According to the monitors, at least three or four bullets flew 1 or 2 meters above their heads. No one was hurt in the incident.

The latest incident in July came at the end of what has been the deadliest month for the Ukrainian military in nearly a year after a sharp spike in violence.

This despite an 18-month-old Minsk cease-fire deal that was meant to halt the fighting. But many of its key points -- including the complete withdrawal of heavy weapons from the front line -- have not been implemented.

On July 19, Ukraine reported seven soldiers had been killed and 14 wounded over the past 24 hours in fighting against Russia-backed separatists in eastern Ukraine. Days later, on July 24, Ukraine’s military said six more soldiers were killed.

"It is indeed true that we see a correlation between an increase in cease-fire violations and in violence in general, and an increase in violations that affect our own monitors. And that is once again a reason why it is important that the security of our patrols are being looked after properly by the sides, Hug said.