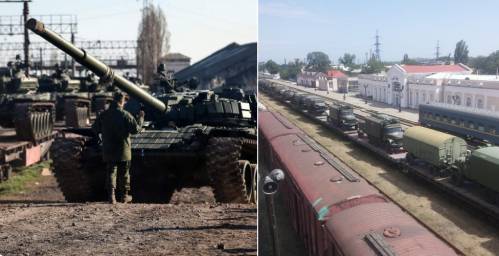 The latest escalation in Russia’s information blockade of occupied Crimea last week may, as suggested, be due to zeal by de facto prosecutor Natalya Poklonskaya and her team of zealous ‘extremism’-hunters. The move does, however, seem potentially more sinister following Russia’s closure on Sunday morning of all crossing points between mainland Ukraine and occupied Crimea and unsubstantiated reports of a ‘battle’ or attack by Ukrainians on Russian soldiers.  Apparent attempts to blame the physical blockade on Ukraine seemed especially implausible given the huge amount of military technology which Russia had transported into Crimea the day before.

Russia has been systematically stifling all freedom of speech since its invasion and annexation of Crimea in 2014.  All of the Internet publications blocked last week are physically located outside Crimea, with most having been forced from the peninsula.  Their reports have remained a vital source of information about what is going on in Crimea under Russian occupation.  The main site targeted was Krym.Realii, the vital Crimean service of Radio Free Europe / Radio Liberty [RFERL].  This was temporarily blocked on April 19 this year, the same day that Mykola Semena, a freelance journalist writing for the website was initially taken into custody. Semena is now facing a possible 5-year prison sentence over an article expressing full support for the civic blockade of Crimea. With typical disregard for the lack of any conviction, Russia has added Semena to its huge List of Terrorists and Extremists, and the same charges of ‘extremism’ first hurled at Krym.Realii in April are now being heard again.

The website is still unblocked in Russia, and there has been no formal notification from Russia’s effective censor Roskomnadzor.  The state-controlled RIA news agency reported Poklonskaya on August 4 as saying that the blocking was at the initiative of her office, and specifically the so-called department on countering extremism and terrorism.

There had been reports that various providers were blocking Krym.realii, Sobytiya Kryma, ATR, Chernomorskaya TRC, and some other sites from August 1. In her interview, Poklonskaya said that Krym.realii had been totally blocked on Aug 3.  It was possible, she said, that only certain articles would be blocked, and access eventually allowed, however they “are seeking the total closure of Krym.Realii as an information portal”. She asserts that it ought to be blocked in all of Russia, as well as Crimea.  This was her position back in April, and then Russia rather unexpectedly backed down.  Poklonskaya is currently standing for election in the Russian parliamentary elections, and may simply be trying to prove what a warrior she is against ‘dissidents’.  Or there are other, more menacing reasons, and Poklonskaya’s zeal is merely a ploy, with the attempt to block vital sources of information coming from higher up.

There was no explanation on Aug 7 for the closure of all checkpoints between mainland Ukraine and Crimea, nor for the reported armed checkpoints and checks being carried out in various districts. Later in the day movement was re-established.  Igor Girkin [Strelkov], the ex-Russian military intelligence officer who played a huge role in Russia’s invasion of Crimea, then eastern Ukraine, claimed early in the day that there were “for the moment officially unconfirmed reports” that there had been a battle at Chonhar with dead and injured among Russian border guards.  It was believed, he claimed, that there had been “an attempt by a Ukrainian (or Tatar) sabotage – terrorist group to burst through, attacking the border control”.

This type of unsubstantiated report was then taken up by pro-Kremlin Russian media.  Later on Sunday evening, Girkin claimed that the reports had been “confirmed”, though was unable to name any reliable number of ‘casualties’, saying that the reports varied from 1 to 200!

The reports have been dismissed as provocation by Ukrainian authorities and certainly such an attack would make no logical sense.  There have, on the other hand, long been warnings that Russia could try just such a ploy to try to justify a crackdown, especially against Crimean Tatars, the vast majority of whom oppose Russian occupation of their homeland.

Indirect confirmation that the closure of the crossing points was part of a major military exercise was provided by the Crimean Human Rights Group who reported on Sunday that Russia had brought a considerable amount of military technology to Kerch by ferry.  Witnesses had reported and provided photographic evidence of a huge consignment of military technology at the Kerch railway station on August 6.  During the same evening, a large column of military vehicles passed through suburbs of the city.  The rights activists point out the ban imposed by international humanitarian law on the movement of such technology through residential areas.

Refat Chubarov, banished Head of the Crimean Tatar Mejlis or representative assembly assumes that both the military movements and the restrictions on crossing the administrative border with mainland Ukraine are linked with major military exercises.  He believes they are also aimed at crushing opposition to the Russian occupiers and convincing those who collaborate with them that they will never give up Crimea.

All of this is combined with attempts to block or prosecute those who still dare to tell the truth about what is happening, while finding foreign politicians or journalists prepared to muffle or even lie about the violations under Russian occupation.