’Like Being A Slave’: Workers On Russia’s Bridge To Crimea Report Abuse, Deceit 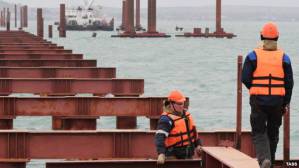 The Kerch Strait Bridge is Russia’s top-priority infrastructure project. At a cost of at least $4.5 billion, the 19-kilometer car-and-rail bridge will tie Russia to Crimea, the Black Sea peninsula Moscow annexed from Ukraine in 2014. (file photo)

At the end of July, construction worker Vyacheslav Abdullin quit his job and headed home on foot – a 600-kilometer trek from the Kerch Strait to his hometown in the Ural Mountains region of Russia.

After a month laboring on a project that President Vladimir Putin has made clear is extremely important to the Kremlin -- a bridge linking Russia to the peninsula it seized from Ukraine in 2014 -- Abdullin had nothing to show for his pains except harrowing stories of deception and abuse.

Working on the Kerch Strait Bridge "is really like being a slave, " Abdullin told RFE/RL.

"You can’t stand, and you can’t sit. Even if you have to wait half an hour for additional materials, if you are standing around, you will be fired. If you sit down, you are fired. You have to be doing something, even if you are just moving boards from one pile to another or tossing stones back and forth, " he said by phone from Zlatoust, a city near Chelyabinsk in the Urals. "You have to look busy all the time. If not, you are fired."

The laborers were not allowed to take off their shirts in the hot summer sun, and sometimes they worked whole days without being given water to drink, Abdullin said.

The Kerch Strait Bridge is Russia’s top-priority infrastructure project. At a cost of at least $4.5 billion, the 19-kilometer car-and-rail bridge will tie Russia to Crimea, the Black Sea peninsula Moscow annexed from Ukraine after sending in troops and staging a referendum dismissed as illegitimate by 100 countries in a UN vote.

Putin has claimed Crimea is "sacred" Russian land and displayed pride in taking control of the peninsula, a move that poisoned relations with Kyiv and the West but which he claims righted a historical injustice. He needs the bridge to improve access to Crimea, which is linked to mainland Ukraine but not to Russia, and to show that he is making it an integral part of the country.

During a visit to the construction site in March, Putin emphasized that the span must be completed by the end of 2018 -- the year he could seek a fourth presidential term -- and threatened "to hang" any manager who "fails to do the job."

Nonetheless, Kremlin auditors estimated in June 2015 that two-thirds of the money allocated for the bridge over the preceding year was unaccounted for.

’No Work In The Cities’

Abdullin’s story began last fall when his house in Zlatoust burned to the ground.

He, his wife, and their two children moved into a rented room, but were told they would have to move out by the end of August because of another renter – leaving him desperate for a way to make money to pay for a new place to live.

That’s when he saw a television advertisement from a company called Liberti, in the Russian city of Izhevsk, looking for workers to go to Kerch.

"I phoned them and asked about food and lodging and all that, " Abdullin said. "They told me that they pay 5, 000 rubles ($77) a month for expenses, plus a cash salary of 47, 000 rubles. They promised two meals a day, transportation there and back, work clothes, and a place to sleep. All of that was included."

But when he got to the construction site and spoke with other workers, he heard a different story.

"Everything was deducted [from the salary], " he said.

The stories the Kerch Bridge workers tell are reminiscent of similar accounts from the construction sites for the 2014 Winter Olympics in Sochi, another prestige project for Putin.

According to Human Rights Watch, many of the estimated 70, 000 migrant workers on those sites endured long hours, unpaid wages, and overcrowded accommodation.

Russia’s economy has deteriorated since then, hit by an oil-price collapse that began four months after the Sochi Games and the effects of sanctions imposed by the Western nations over its annexation of Crimea and support for separatists in eastern Ukraine, as well as the measures Moscow has taken in response.

Abdullin said there are workers from across Russia at the Kerch project, drawn there from depressed towns by promises of high wages.

"They come from far off because there is no work in the cities, " he said. "There were some who came and immediately understood what was going on and then took off again the next day -- the ones who had money. But what were the guys who had no money supposed to do? Where do they go?"

Abdullin returned from Kerch with another man from Zlatoust, Aleksei Loginov, who told a similar story.

"They treat people very badly there. They don’t even consider them to be people. They treat them worse than animals, " he said. "All day, you can’t even sit down or take a smoke. There were no smoking breaks…. All 11 hours, you had to work, work, work. Without a break. If you sit down, you are fired. That’s how they treated people."

"They’ll fire you for nothing, " he said. "That’s how the whole Kerch Bridge project is built. They fire people and send them away without any pay. They are actually trying to break people because they know they are far from home and they don’t have the money to travel home."

When one month of work was up and no money came their way, Abdullin and Loginov had enough. They caught the ferry to the village of Taman, on the Russian side of the strait, and started walking. They hitchhiked occasionally, slept in fields, and ate whatever food they could find.

"We ate corn and whatever else we could find, " Loginov said. "Cherries, apples."

When he reached the village of Millerovo in Rostov Oblast, Loginov received a wire of train fare from his wife. Abdullin walked the rest of the way alone.

Abdullin, who remains in desperate need of money, still hopes to get his wages from the people at Liberti, even though his work contract and other documents were taken from him at the Kerch site. He plans to take his case to local prosecutors.

Loginov, on the other hand, just wants to forget the whole experience.

RFE/RL was not able to reach Liberti for comment. The only telephone number listed has been disconnected.