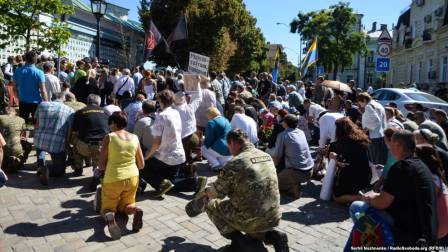 On August 29, Ukrainians honoured the memory of all those soldiers killed exactly two years ago in the Ilovaisk Battle in which Russian President Vladimir Putin played a major – and treacherous - role.

According to official figures, 366 Ukrainian soldiers died during those last days of August, with a further 429 wounded.  128 were taken prisoner and 158 are missing, believed dead.

After widespread expectation in July 2014 that the Ukrainian military would soon totally defeat the Kremlin-backed militants in Donbas, the situation changed dramatically in August.   Attempts by the Ukrainian military to regain control of the city of Ilovaisk from fighters linked to the so-called ‘Donetsk people’s republic’ began on Aug 7, 2014 and went badly wrong, with government forces becoming encircled by the militants.  The latter were from the outset reported to be heavily backed by Russian forces.  By Aug 28, the situation was dire and in the early hours of Aug 29, 2014, an ‘Appeal to the insurgents of Novorossiya’ appeared on Putin’s official website.

The agreement was a trick and the vehicles immediately came under attack with the use of mortar fire and heavy ammunition.  A minimum of 100 soldiers were killed, and many others taken captive as a result of that treachery.

Among those taken prisoner near Ilovaisk was Yehor Vorobyov, a TV Espreso journalist who on Aug 28 had interviewed two Russian paratroopers caught by the Ukrainian army.  The soldiers explained that they had been told they were going on exercises.  They were taken in column at night first to somewhere near the Ukraine – Russian border and then into Ukraine.  Asked by Vorobyov when they realized that they weren’t on a training exercise, Ruslan Akhmetov and Arseny Ilmigov answered: “When we came under fire”.  Vorobyov was released finally on Oct 7.  A YouTube clip shows how Kremlin-backed militants interrogated and beat him up, striking him hard when he answered truthfully that he and others with him had been captured by Russians in uniform.

The first report in Russia of Russian soldiers being killed in Ukraine came on Aug 25, and many swiftly followed.  By Aug 27, 2014, the independent newspaper Vedomosti was asking: “If Russia is not at war, then who is in those freshly dug graves?”  Lev Schlosberg, the Pskov journalist and politician who revealed the first deaths of probably most of a Pskov paratrooper regiment was savagely attacked just days after he made the information public.  Even if we leave the question ofwhy Boris Nemtsov was murdered open, a number of human rights activists and others who probed Russian military deaths have faced criminal prosecution or attacks.

Polish television crews had, by then, long been showing Russian armed personnel carriers, artillery and anti-aircraft weapons turning onto a road leading to the border.  See for example,  Artyleria, wozy opancerzone i broń przeciwlotnicza. Ruchy Rosjan przed kamerą TVN24  (4 clips from Aug 18).  Although there were no direct shots of the Russian vehicles crossing, the steady flow was in one direction and there were also shots taken by the militants where you could see, for example, a BTR-80a transporter which the Ukrainian military do not have.  On Aug 19,  the same journalist reported that the road leading to the border had been blocked since morning by an endless stream of Russian tanks carrying equipment, etc.