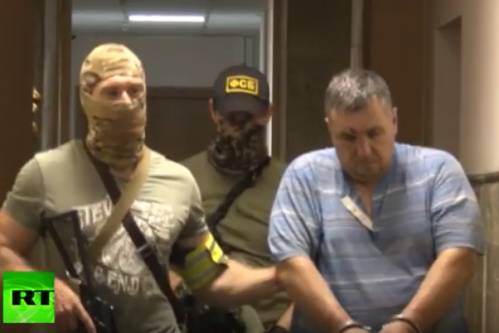 Russia is continuing to hold Ukrainian Yevhen Panov prisoner in occupied Crimea, and preventing him from seeing a lawyer.  The European Court of Human Rights has responded with hard-hitting questions about the legal grounds for Panov being deprived of his liberty, whether he has a lawyer, etc. with responses required from both the Russian and Ukrainian governments.

Three weeks after Russia first showed a video of Panov on state television and claimed his involvement in totally unconfirmed ‘acts of sabotage’, the answers are urgently needed.  Virtually none, however, can be answered by Ukraine.  There can be no legal basis for Russia taking Panov prisoner in Crimea which it is occupying illegally.  The Court has also asked where he is being held; whether he has injuries and if so, what is their origin; whether he has access to and is receiving medical treatment.  Does he have access to a lawyer and to Ukrainian consular support?.

It is unclear whether Russia would allow a Ukrainian representative to visit Panov, but also theoretical.  Russia is illegally occupying Crimea, and its ‘detention’ of a Ukrainian national on Ukrainian territory is, correspondingly, unlawful.  Ukraine’s consul can therefore not provide effective recognition of illegal occupation by formally seeking permission for something Russia has no right to be doing.

Igor Kotelyanets, Panov’s brother has, however, taken on a Crimean lawyer to represent Panov.  He has not once been allowed to see his client, and on August 31, the investigator handed him a scrap of paper which claims that Panov has rejected his services.  There is no signature on it and no reason to believe that Panov has freely renounced real legal defence.  The lawyer, in consultation with Panov’s family, is therefore challenging this grossly irregular refusal and will continue to demand to see his client.

On the video broadcast on Aug 11,  Panov certainly looks as if he has been beaten.  By preventing him from seeing an independent attorney, Russia only confirms the legitimate concern expressed by his family and human rights groups that the ‘confession’ he gave on the tape was extracted through torture.

Serdyuk does exist, but is not part of Ukraine’s Military Intelligence, and the latter has rejected any involvement.  Vasyl Hrytsak, Head of the SBU [Ukrainian Security Service] stated at a briefing on Thursday that the SBU has not been able to discover how Panov, who is from Zaporizhya, came to be in Crimea.

His family remain convinced that Panov was abducted, and say that both because of the year he spent in the Ukrainian Army in Donbas, and his attitude to Russia’s annexation, there is no way that he would have voluntarily crossed into Crimea.

Since its invasion of Crimea in February 2014, Russia has arrested a number of Ukrainians either in Crimea or in Russia.  Each time the FSB or Investigative Committee has come up with stories of supposed ‘sabotage’, ‘terrorism’ or even war crimes.

Serhiy Lytvynov was abducted in August 2014 and tortured into ‘confessing’ to hideous war crimes that he could not have committed since neither the people nor the addresses provided had ever existed.  Russia then came up with equally absurd charges, and he remains imprisoned.

In the case of 72-year-old Yury Soloshenko, physical torture was not applied, but Ivan Pavlov, the human rights lawyer chosen by the family was prevented from representing Soloshenko.  With a ‘lawyer’ appointed by the investigators and otherwise totally isolated, the elderly pensioner was tricked into ‘confessing’ to mystery spying in the hope that he would then be released and returned to Ukraine.

Russia has yet to substantiate its claims that there was shelling from mainland Ukraine and two ‘sabotage attempts’ during the night from 7-8 August.  It has provided only televised ‘confessions’ for any of its claims regarding a ‘thwarted attack’ the previous evening.

This format was first used back in late May 2014, following the arrests and torture of Ukrainian filmmaker Oleg Sentsov, civic activist Oleksandr Kolchenko and two other Ukrainians who opposed Russia’s annexation of Crimea.  The FSB made equally grandiose allegations which were then repeated as ‘confessions’ by the other two men arrested and broadcast by pro-Kremlin media.  Most of the alleged terrorist acts had been shelved by the trial of Sentsov and Kolchenko and no evidence was provided. Despite that, and the fact that Gennady Afanasyev stood up in court and clearly retracted all testimony as having been tortured out of him, Sentsov was sentenced to 20 years, Kolchenko to 10.

It is excellent that the European Court of Human Rights has been asked for a response from the outset.  Whether Russia will react at all remains, however, in question.