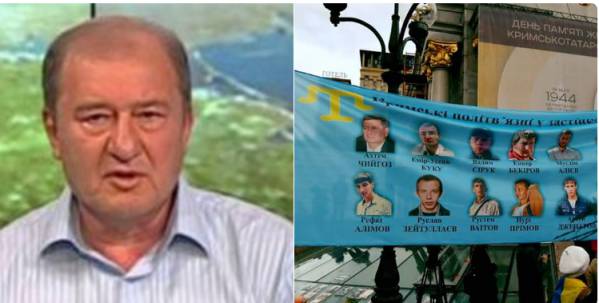 International protest over Russia’s prosecution and punitive psychiatry against Crimean Tatar leader Ilmi Umerov has not gone unnoticed in Moscow.  The demands for his immediate release are unheeded, but a newspaper close to the Kremlin has produced a supposed ‘interview’ trying to discredit Umerov and refute all grounds for protest.

Nariman Dzhelyal, First Deputy Head of the Crimean Tatar Mejlis has visited Umerov in the psychiatric clinic where he is being held against his will, and reports that Umerov is appalled at the primitive lies and distortion.  It seems that Komsomolskaya Pravda employee Anastasia Medyntseva did turn up at the clinic, but it is clear that what she came up with either misrepresents what Umerov said, or is simply invented.

The text is clearly aimed at arousing doubts in people’s minds.  It acknowledges that the charges against Umerov are over an interview where he repeatedly stated that Crimea is Ukraine.  It claims however that he called for Crimea to be returned through improper means of force.  Umerov said that Russia should be made to leave Crimea and Donbas. No more.

The ‘interviewer’ has taken words entirely out of context in typical manipulative fashion.  The title, for example, quotes Umerov saying he is no political prisoner.  He did indeed deny this, saying that he had not been convicted of any crime.  This does not mean that the prosecution and treatment now are not politically motivated and linked with his open opposition to Russia’s occupation of his homeland.

One could correct each sentence, but, like with Soviet propaganda, it is better not to read it.  It is, however, worth noting that the ‘journalist’ had access to documents she must have been shown by the FSB, not by Umerov.  Most importantly, as Umerov’s lawyer Nikolai Polozov points out, the fact that Russia is resorting to such tactics means that pressure does have impact and must be stepped up.

The text was published on the eve of the September 3 global action in support of Ilmi Umerov, whose state of health has been gravely jeopardized by the court hearings and conditions in the clinic.

One of his lawyers Edem Semedlyaev reported on September 1 that the Russian Supreme Court is scheduled to review the appeal against the forced psychiatric assessment on Sept 13, after Umerov is due to be released.  There are no grounds for expecting a just decision, nonetheless the timing is immensely cynical.

In fact, the cynicism about everything to do with the criminal charges is overwhelming.  Umerov is accused of ‘public calls to action aimed at violating Russia’s territorial integrity’, which is how Russia has the gall to label the position taken by Umerov, together with all democratic countries, that Russia must leave Crimea.

In a letter from the clinic, posted on his Facebook page, Umerov writes that when the occupation authorities are making every effort to crush dissident views and civic resistance, the border between good and evil, faithfulness and betrayal, fear and the need to withstand evil, the safety of one’s family and personal courage become blurred.

He has been fortunate, he says, in having made the right choice, even if the Russian state is persecuting him for it.  He gains strength in knowing that dozens of his compatriots have made an analogous choice.

The world must learn of the repressive measures being carried out by the occupation regime in Crimea.  It is vital that the topic of Russia’s occupation of Crimea and of repression in Crimea are raised at the G20 Summit in China.

More details about all but the latest seizure of three Ukrainians – Yevhen Panov, Ridvan Suleimanov and Andriy Zakhtei here:

There are, however, two ‘trials’ now underway, which most urgently need attention.

Crimean Tatar Mejlis leader Akhtem Chiygoz, and two other Crimean Tatars – Ali Asanov and Mustafa Degermendzhy – have been in detention for well over a year on entirely lawless grounds.  They are charged either with ‘organizing’ or ‘involvement’ in a pre-annexation demonstration on Feb 26, 2014, over which Russia has no jurisdiction.  There are strong grounds for believing that Asanov, the father of four small children, and Degermendzhy are in prison because they refused to give false testimony against Chiygoz.

As well as lack of jurisdiction, there are no grounds for any of the specific charges.  It is, in fact, unclear what exactly the men are alleged to have done, and certainly no evidence against them.

Russia is breaching the men’s right to a fair trial, with none allowed to be present in person at the court trials.

The verdict is now due in a ‘trial’ that has just ended in Rostov [Russia] of four Crimean Muslims from Sevastopol, who are accused by the Russian occupiers of involvement in Hizb ut-Tahrir, a pan-Islamist movement which is legal in Ukraine.  Russia declared it ‘terrorist’ in 2003 without providing any grounds. The prosecutor has demanded 17 years for 30-year-old Ruslan Zeitullayev, who is accused of organizing a Hizb ut-Tahrir group, and 7 or 8 years for Ferat Saifullayev; Rustem Vaitov and Nuri Primov, who are accused of ‘involvement’.

There is no evidence that any man is now a member of Hizb ut-Tahrir, or that any has been involved in anything illegal.

There is none that the organization is in any way ‘terrorist’.

These are just some of the reasons why the Memorial Human Rights Centre has recognized all four men political prisoners.

The verdict is due on September 7 in the same court that on August 25, 2015, sentenced two other Crimean opponents of annexation – Oleg Sentsov and Oleksandr Kolchenko to 20 and 10-year sentences for nothing.  They are still held in Russian prisons, thousands of kilometres from their families.

If the world is silent about this trial, it will free Russia’s hand to continue such acts of overt terrorization of Crimean Tatars and all others who oppose Russian occupation of Crimea.

Please raise these cases and name Russia’s political prisoners in all actions in defence of Ilmi Umerov, and to politicians and the media in your country!

More details about all 14 men here: Terror on a Conveyor Belt in Russian-occupied Crimea

Addresses and suggestions what to write, copy-pasting, in Russian here