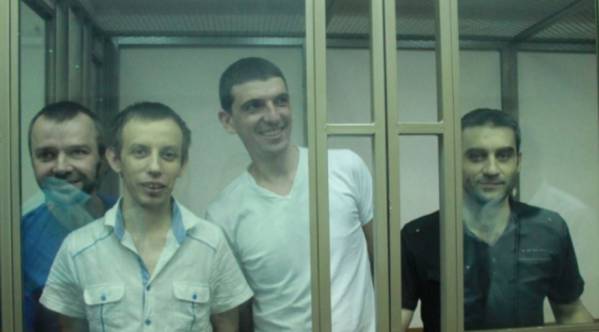 The call from Ilmi Umerov, Crimean Tatar leader and victim of punitive psychiatry for world attention to all Crimean political prisoners could not have come at a more critical moment.  Verdicts are due on September 7 in Russia’s trial of four Crimean Muslims from Sevastopol.  Attention is urgently needed and not only because all four men are recognized political prisoners.  There are already 14 men, almost all Crimean Tatars, in effectively indefinite custody on the same trumped-up charges.  Without international protest, that number is certain to rise, with Russia as occupier of Crimea using such conveyor-belt prosecutions to imprison rights activists or others who take a strong civic position.  It is no accident that during the ‘trial’ which has just ended in Rostov (Russia) of the Sevastopol men, the question of their criticism of Russia’s annexation was often raised.

All 14 men are accused of either ‘organizing’ or ‘involvement’ in Hizb ut-Tahrir, a peaceful organization with pan-Islamist views which is legal in Ukraine and most countries.  The prosecutor in Rostov, where the trial has now ended, has demanded a 17-year sentence for Ruslan Zeitullayev, and 7 or 8-year sentences for Nuri Primov; Ferat Saifullayev and Rustem Vaitov for supposed ‘involvement’.

There is no evidence that the organization itself is ‘terrorist’, nor that the men are in fact members of it.

Three of the men have been in custody since January 2015, while Ferat Saifullayev was arrested in April that year.  All deny any involvement in Hizb ut-Tahrir, and there is no proof that would stand up in a real court.

There is one ‘kitchen discussion’ on the level of what would, theoretically, be a good world order.

A ‘secret witness’ who spoke with long hesitation from a separate room with the breaks clearly being used for somebody to prompt him on what to answer.  Even then his answers were confused and contradictory.

That ‘witness’ was doubtless brought in after the prosecution’s ‘witnesses’ proved a disaster.  Aside from a former Ukrainian SBU officer who was involved in a dodgy land dispute involving Zeitullayev and Saifullayev, and is now working for the FSB, the other witnesses almost all retracted testimony they had allegedly given or denied having said what was asserted of them.

During her final address to the court, one of the defence lawyers Oksana Zheleznyak noted that the indictment itself had been copied from a 2013 case in the Russian Federation.  26 men were convicted on identical charges to that facing the Ukrainians from Sevastopol.  They too were declared political prisoners by the Memorial Human Rights Centre.

These prosecutions are purpose-made for easy convictions. By calling the organization itself terrorist, you don’t need to demonstrate that an individual suspect actually committed or planned to commit any crime.  You simply claim that they were ‘involved’ in Hizb ut-Tahrir.

Lack of proof of involvement is no problem since even ‘secret witnesses’ and bizarre ‘expert’ assessments can be used.  Certainly during this trial, the court has been firmly on the side of the prosecution and does not ask inconvenient questions.

The fact that there is no evidence that the actual organization is in any way ‘terrorist’ is also no problem.  The Supreme Court once said it was.

These prosecutions have nothing to do with terrorism, nor with justice.

They are a direct attack on Crimean Tatars and a warning to others not to convert to Islam.  There are, in fact, strong grounds for believing that the one convert Vadim Siruk was arrested precisely as such a warning.  In one case, that of Emir-Huseyn Kuku, there is strong evidence that an attempt was first made to abduct him.  It was only after this failed, and he demanded an investigation of the FSB behaviour, that the human rights activist was arrested on ‘Hizb ut-Tahrir charges’.

All the arrests have been accompanied by mass armed searches, during which masked men with machine guns have burst into Crimean Tatar homes, terrifying children and using totally unwarranted force.  The FSB are also known to have tried to question and terrorize the small children of men imprisoned, such as the 9-year-old son of imprisoned human rights activist Emir-Huseyn Kuku.

Russia’s victims have names.  Most also have children.  Pressure is needed on Russia now to stop the terror, or there will be more.