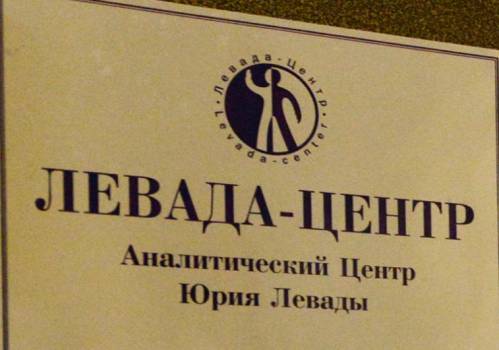 The Russian Justice Ministry has added the Levada Centre to its list of ‘foreign agents’, placing the internationally respected public opinion pollster’s very existence in jeopardy.  The move was, appropriately enough, initiated by the pro-Kremlin ‘Anti-Maidan’ organization, and comes just days after the Centre reported a major slump in support for the ruling United Russia Party.

The Levada Centre was created in 2003 by the late Yury Levada and colleagues who were fed up with the political pressure on the state-owned Russia Public Opinion Research Centre [VCIOM].  In late 2015 VCIOM obliged President Vladimir Putin by producing, within 24 hours, a ‘survey’ finding that the vast majority of Crimeans were willing to forego electricity rather than sign a contract in which Crimea was referred to as part of Ukraine.

The Levada Centre has, in contrast, earned a reputation as independent pollster, and it is no accident that this is the second attempt to effectively paralyze it through the ‘foreign agent’ legislation.

In March this year, for example, the Levada Centre reported a 10% drop in Putin’s popularity.  In July this year, it investigated the public’s attitude to the Bolotnaya Square prosecutions after protests over Putin’s third term as president.  The survey found that 54% of respondents viewed the case fabricated in order to deter people from protesting.

In 2013, the authorities backed down.  Since then, however, the regime has become much more repressive and disgruntlement is noticeably on the increase. Levada Director Lev Gudkov has warned that if its appeal against the Justice Ministry’s decision is rejected, it will not be able to continue. As well as all kinds of controls and checks on NGOs added to the ‘foreign agent’ list, there is also the label itself which must be placed on all material, etc.  Branded in this way, it’s simply impossible to carry out a public opinion survey, Gudkov told TV Dozhd.

‘Anti-Maidan’ wrote a denunciation to the Justice Ministry in July, claiming that the Levada Centre had, since 2012 received money from the US Defence Department, with the University of Wisconsin acting as an intermediary.  Gudkov denies this, and says that the spot check in August had been carried out in sloppy and biased fashion, and was fulfilling a political order.  He does not see the elections due in two weeks as the reason for this move, but does mention the fact that his centre had demonstrated the fall in support for the ruling party.  While support for Putin remains high, those phoned by the Levada Centre have also not been frightened to demonstrate falling support for the prime minister Dmitry Medvedev.

Since the relevant law was passed in 2012, Russian NGOs engaged in something termed ‘political activity’ and receiving any funding from abroad have to be registered as a ‘foreign agent’.  The law was boycotted by a lot of civic organizations, so in June 2014 Putin signed into force a law which allows the Justice Ministry to forcibly include organizations on the register with this significantly restricting their rights and possibilities.  It has been using this power ever since, against, for example, the Golos organization campaigning for honest elections, Soldiers Mothers of St, Petersburg after it probed the deaths and injuries of Russian soldiers, including conscripts, in Russia’s undeclared war against Ukraine, and the Sakharov Centre.

A new law passed on May 20, 2016, and signed by Putin on June 2 was slammed by rights organizations as being aimed at destroying civil society altogether.  This significantly broadened the definition of ‘political activity’ to effectively include criticism of corrupt officials, or groups of citizens who band together in defence of socio-economic rights.

At the time we reported that it had now become dangerously easy to label any organization ‘political’.  You could end up ‘political’ for issuing a public appeal or organizing public discussion aimed at persuading the authorities to pass, change or revoke laws, etc.  Or for criticizing decisions taken by the authorities or its policy.  The amendments made it possible to call observing elections ‘political activity’, or even carrying out surveys of public opinion.

Armed with such a weapon, Moscow has now turned its aim on the Levada Centre.  If the ban is not revoked, this will have grave ramifications both for Russia and, as the December 2015 ‘survey’ demonstrated, for Crimea while it remains under Russian occupation.