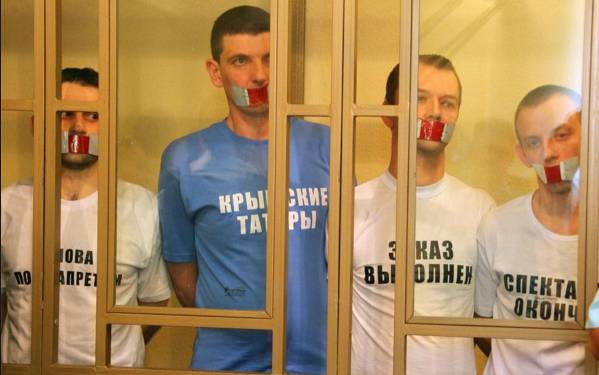 The first sentences have been passed in Russia’s mounting offensive against Crimean Muslims, with the four Crimean Tatars all sentenced to real terms of imprisonment.  The trial was critical since Russia is already holding 14 Crimeans, almost all Crimean Tatars, in indefinite custody on identical charges.  The sentences could have been much worse, which is the only positive thing to say since the men were convicted, without any evidence, of involvement in Hizb ut-Tahrir, an organization which is legal in Ukraine.

The verdict will, of course, be appealed, however the convictions had been anticipated. The ‘trial’ was, after all, taking place in the same Rostov military court which in August 2015 sentenced Crimean political prisoners Oleg Sentsov and Oleksandr Kolchenko to huge sentences, and the prosecutor had demanded long sentences in this case also.

The men were accused of involvement in Hizb ut-Tahrir, a totally peaceful pan-Islamist organization which back in 2003 Russia’s Supreme Court declared ‘terrorist’, together with 14 other organizations.  No grounds were given and the ruling was effectively concealed until it was too late for the organization itself, and human rights NGOs to appeal against.

There is nothing incriminating against Hizb ut-Tahrir, but there is also no proof that the four men are in fact members. All four men deny such involvement. Almost all the prosecution’s ‘witnesses’ testified essentially in the men’s favour.  Russia then resorted to the testimony of a secret witness, who could not even be cross-examined properly.  There were long delays while the man was clearly being told what to say.  Even then he came up with totally contradictory statements.  He could not remember the place or time, for example, but did remember every incriminating word that they were supposed to have spoken.

There was also the testimony of a former Ukrainian SBU officer who betrayed his oath and now works for the FSB.  There is considerable evidence that he had long been waging a personal vendetta over two of the men, who had lodged a complaint back in 2012.

These trials are always cynical, since Russia, having never explained why it considers Hizb ut-Tahrir to be terrorist when no other country does, uses secret witnesses to convict people merely of involvement in it.  They were especially lawless in Crimea, and not only because the organization is legal in Ukraine.  The prosecution kept on referring to events from long before Russia had invaded and annexed Crimea and also concentrated on the men’s negative attitude to Russian occupation.

Aside from highly dubious ‘testimony’, there was evidence only of a ‘kitchen chat’, on the level of what kind of world order would be desirable.

While any conviction of four recognized political prisoners is to be condemned, the sentences could have been worse. Ruslan Zeitullayev had been charged with ‘organizing’ a terrorist organization (Article 205.1 § 1 of the Russian criminal code) with the minimum sentence for this 15 years.  Nuri Primov, Rustem Vaitov and Ferat Saifullayev were accused of taking part in it (Article 205.1 § 2), with this carrying a minimum 5-year sentence.  The prosecutor last week asked for a 17-year sentence for Zeitullayev, and 7 or 8 years for the other three men.

The court instead changed the charges against Zeitullayev from ‘organizing’ to ‘involvement’ and sentenced him to 7 years, while the other three men received the minimum 5-year sentences.  Unfortunately, no Russian judges would have the courage to acquit people of politically motivated charges, but the minimum sentences in this case are effective confirmation of the lack of any grounds for criminal prosecution at all.

The men arrived in court for the sentences defiant and unbroken.  Each had a different sign on their T-shirt: “Crimean Tatars”; “Yet again banned”; “The show is over” and “The order carried out [as commissioned]”.  As they entered the glass cage, each man put tape over his mouth.

All four men are from Sevastopol and three of them have been in custody since January 2015.  Saifullyaev was arrested slightly later, in April 2015.

It seems likely that Russia was waiting to see what the reaction would be to these arrests.  There was unfortunately next to no reaction internationally and in February 2016, a further four men were arrested and remain in custody.  The armed searches and arrests have now gained pace with 14 men in all held in appalling conditions and facing the same grotesque charges.  At least one of the men – Emir-Huseyn Kuku is a human rights activist, almost certainly imprisoned for his monitoring of rights abuses.

Russia has finally come up against resistance to monstrous conveyor-belt ‘trials’ and sentences which it has been carrying out, wholesale, for the last 10 years.  It was typical that the indictment in this case had been copied from a 2013 prosecution in the Russian Federation.   Challenged by real lawyers who genuinely represent the men’s interests, the ‘case’ was seen in all its squalor.

The Memorial Human Rights Centre has, from the outset, followed such cases in the Russian Federation.  It considers all men sentenced purely on the grounds of involvement in Hizb ut-Tahrir to be political prisoners.  Given the scale of the repression in Russia, it is frustrating that international rights organizations have long been silent.

That silence has continued since Russia began applying this repressive practice in occupied Crimea, with the armed searches and arrests clearly aimed at intimidating and silencing Crimean Tatars and deterring any other Ukrainian Muslims.   Their treatment is appalling and often openly aimed at humiliating them.

As reported, Memorial HRC recognized  Primov; Saifullayev Vaitov and Zeitullayev as political prisoners. In its statement it stressed that Crimea was territory which Russia was occupying and that it was accusing the men of involvement in an organization that is legal in Ukraine.