Zelensky’s proposed ‘reform’ of the Security Service fails badly on both reform and human rightsPost-election Ukraine. More of the same or a new human rights agenda?Ukrainian prisoners can get years added to their sentence for demanding their rightsThe Only Way to Improve Ukraine’s CourtsPresidential Administration Says Law Requiring Activists to Disclose Assets Is Invalid and Unenforceable, but Ukraine’s Activists Aren’t Buying ItAll judges dismissed for persecution of Maidan activists likely to be reinstatedPoroshenko accused of creating a weapon against critical NGOs, like in Russia & KazakhstanNine Things Ukraine Should Do in 2018Ukraine’s ‘party dictatorship’ law for removing inconvenient MPs revoked as unconstitutionalWill Ukraine’s Parliament Accomplish Anything This Fall?Human rights groups warn of dangerous legislative offensive against NGOs in UkraineHow Ukraine Can Win the Revolution AgainRehabilitation Package of Reforms slams discriminatory bills on NGO public reportingPublic Integrity Council negative opinions should be grounds for disqualifying Supreme Court candidatesWhat Will Ukraine’s Next Big Reform Be?RPR: Party quotas must not be applied in appointing new Human Rights CommissionerPoroshenko signs anti-Maidan law against NGOs & journalists fighting corruptionParliament pass law that could help Yanukovych avoid justice while hurting UkrainiansThree years after the Revolution of Dignity: Why reforms are slowing, and how to prevent backtrackingUkraine’s Parliament slips in dangerous carte blanche for blocking torture investigations
• Topics / Politics and human rights 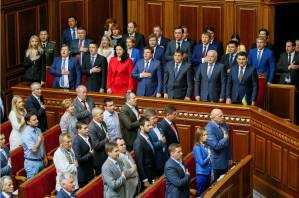 Over the last two and a half years, Ukraine has channeled the energy of the Euromaidan protests into building a new state, and has achieved a number of major accomplishments. However, much more remains be done. The delay in implementing crucial reforms is equivalent to stopping halfway, while the slow rate of change is already deepening society’s frustration toward government authorities. Despite the ruling coalition’s fragility in parliament, civil society activists hope MPs will unite over crucial initiatives to ensure the passage of these ten changes:

Granting the National Anticorruption Bureau of Ukraine (NABU) independent wiretapping powers, as laid out in bill No. 4812. So far, NABU detectives are limited in their ability to intercept communications during their investigations; they have to work through the Security Service of Ukraine, which significantly increases the risk of confidential information being leaked and substantially affects the effectiveness of their investigations.

Providing a legal basis for the creation of specialized anti-corruption courts. The establishment of a Supreme Anti-Corruption Court is provided for by a new law that was adopted together with constitutional amendments regarding the judiciary on June 2, 2016. However, these provisions are not enough. The effectiveness of NABU and the Specialized Anti-Corruption Prosecutor’s Office (SAP) in prosecuting corrupt officials largely depends on the courts. The creation of special anti-corruption courts for top corruption cases is crucial; judges should be selected transparently through open competition with the participation of representatives from international organizations. In addition, special security measures should be put into place to protect anti-corruption judges’ lives and families.

Adopting a new law, “On the High Council of Justice, ” without shortcomings. The Judicial Reform Council developed a new version of the law “On the High Council of Justice.” However, the version discussed on July 27 contains a number of significant drawbacks that would allow current problems to continue for years. In particular, the requirement that any candidate for the High Council of Justice (HCJ) have ten years of experience as a judge makes it impossible for new blood to enter the council. Moreover, the bill jeopardizes the HCJ’s transparency, fairness, and efficiency when considering disciplinary cases against judges, and allows them to avoid being held accountable for their misconduct; it also provides no mechanism for responding to judges’ complaints about undue interference with their duties. The bill should be adopted only after these shortcomings are corrected.

Rebooting the Central Election Commission. The terms of office for twelve of the fifteen CEC members expired on June 1, 2014, but they remain in their positions. Nominees for new CEC members were submitted in the fall of 2015, but the president delayed registration of the nominations until June 2016, and the reboot of the CEC was later postponed to fall 2016 (so as to avoid interrupting parliamentary by-elections on July 17). The reboot of the CEC is the first step in comprehensive electoral reform, which also includes the introduction of an open list proportional electoral system, one of the parliamentary majority’s key commitments.

Ensuring the independence and transparency of the Energy Regulator, bill No. 2966-d. This bill aims to define the formation, organization, and legal status of the National Commission for State Regulation of Energy and Public Utilities, known as the Energy Regulator, and provide it with the powers necessary to implement its agenda in accordance with EU standards. Activists demand that the bill be amended for the second reading to include provisions on a full reboot of the commission and introduction of market-level salaries for commission staff. Adoption of this bill is one of Ukraine’s international commitments.

Facilitating decentralization of powers and resources to local communities, bills No. 4472, 4473, 4390, and 3390. This package of billswill simplify the process for establishing capable decentralized communities, and will increase their number. In addition, subsequent bills will ensure adequate funding of the communities considered capable by the government, and allow their local self-governing bodies to implement urban planning and develop the necessary documentation.

Green-lighting long-awaited healthcare reform by providing a legal basis to create independent medical establishments, bill No. 2309а-d.This bill provides for comprehensive healthcare reform by creating a network of autonomous state and municipal healthcare establishments. However, at the bill’s first reading, an important provision was missing: a deadline for transition from the current state to independence. A deadline must be added before the bill’s second reading.

Introducing a defined contribution system of pension insurance, bill No. 4608. This bill creates a fair pension system by moving to a single principle of pension calculation. It improves the pay-as-you-go system by abolishing non-relevant payments; it also introduces a defined contribution system of pension insurance that will allow people to determine for themselves the level of their income after retirement, reduce the Pension Fund deficit financed from the state budget, and facilitate de-shadowing of citizens’ incomes.

Not allowing the president to usurp power regarding the selection and appointment of heads of local state administrations (LSA) by rejecting bill No. 4370-1. This bill changes the procedure for selecting candidates for LSA heads, which contradicts the constitution: it significantly downplays the role of the Cabinet of Ministers. The bill received a negative review by the Rada’s Scientific Experts Office, and was approved on July 7 with a gross procedural violation.

This list is certainly not comprehensive, but it includes important bills that should have been adopted ages ago. In addition, MPs should not only adopt reformist bills and provide for adequate state financing of newly established institutions like NABU, but should also prevent efforts to roll back reform achievements. The readiness of political elites from different parties to quit populism and start making real changes will be the best indicator of their political maturity.

Olena Halushka is international relations manager at the Reanimation Package of Reforms in Kyiv, Ukraine. She tweets @OlenaHalushka.