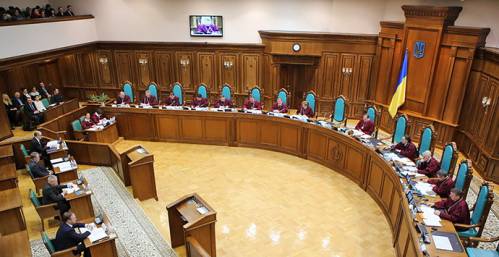 The Constitutional Court announced the decision on September 13 to an audience made up of members of the Ukrainian Council of Churches and Religious Organizations, the Institute for Religious Freedom, the media and members of the public.  The religious organizations mentioned had, at the request of the Constitutional Court, presented arguments for revoking the requirement.

The judgement is dated September 8, 2016 and states that “in a democratic law-based country there cannot be different rules for holding peaceful assembly, depending on the organizers and participants, the aim, place, form, etc.”.

Up till now, political demonstrations, for example, required notification only, while religious gatherings needed a permit.  The Court has now agreed that there must be only one legal mechanism for regulating peaceful assembly.   There can also be no excuse for such effective religious discrimination.

The conclusion seems too obvious to need to run through the arguments given, however the Court does cite both Ukrainian law and the European Convention on Human Rights.

The legal requirements have now been declared unconstitutional and are null and void.  The decision is final.

This is indeed a victory, but one that has taken too long to achieve.  The Institute for Religious Freedom notes that the requirement in question has been in force for the last 10 years.

The next step should, of course, be formulation of proper legislation protecting freedom of peaceful assembly generally.  Under Viktor Yanukovych, it became standard for the courts to be asked for, and, unfortunately, to provide bans on peaceful assembly, with nonsensical pretexts given.  There are occasional exceptions, but the situation has basically changed.

The difference is now sadly dramatic if one compares Ukraine with Russian-occupied Crimea.  In July this year the number of places where in theory meetings can be held was halved throughout Crimea, while in some places, like Kerch, the restrictions are much more extreme.

This is strictly in theory, since permission will still be required, and may be withheld. The designated places are likely to be far away and will not be seen by the people they are trying to address

Almost all Crimean Tatar or traditional Ukrainian events are effectively or actually banned.  Likely participants normally receive ‘warnings’ about the inadmissibility of so-called extremist activities and any participants even in small events are likely to be detained, and face administrative charges.