"US guilty of genocide": Kremlin supports anti-Maidan festival with links to the German far rightOdesa 2 May Suspect: We were financed by MoscowVital Probe of Odesa May 2 Tragedy stymied because of questions answered?Movement at last on Odesa 2 May investigationRussia Today, or why Odesa May 2 is different from BaltimoreOdesa May 2 Investigation: A Failed Test for Ukrainian JusticeMore Evidence against Incendiary Lies about Odesa 2 MayContinuing Obstruction of Odessa May 2 InvestigationPropaganda that KillsOdessa May 2 trial turns into farce as Russia continues ‘massacre’ propagandaBad Start to Crucial Odessa May 2 TrialsRussia’s New Odessa FileOdesa "Massacre" Propaganda vs. the FactsDangerous silence over police role in Odessa May 2 eventsWithout Double StandardsWhat Russian TV won’t show about the events in OdessaCVU: Pro-Russian activists sold information about pro-Ukrainian activists in OdessaUHHRU condemns police role in Odessa tragedyNavalny attacker led 2014 attempt to repeat Donbas seizure of power in KharkivUkraine faces human rights court hammering over investigation of Odesa 2 May Tragedy
• Topics / The right to life 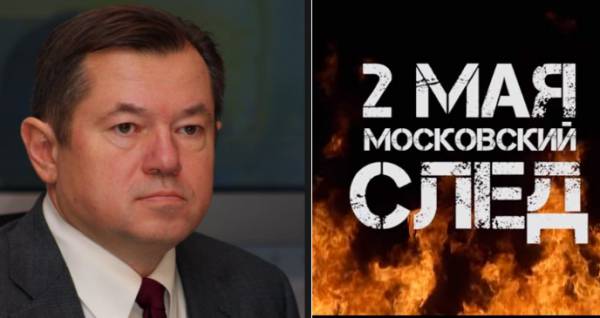 A new film has exposed direct links between Moscow and the disturbances in Odesa from late February to the tragic events of 2 May 2014 in which 48 people died. The film ‘2 May. Moscow Trail’ was produced by Odesa journalists and is based solely on Russian and pro-Russian sources.  The material provides additional proof of the authenticity of recordings recently published by the Prosecutor General’s Office.  In these, Sergei Glazyev, an adviser to Russian President Vladimir Putin, can be heard discussing how disturbances in Odesa and other cities are to be orchestrated, as well as the formation of a ‘government’ in Crimea in which Russian soldiers had just seized control.

The film producers demonstrate how the same people involved in an earlier attempt to seize control and declare an ‘Odesa people’s republic’ and heard discussing this on the Glazyev tapes, also initiated the mass disturbances in Odesa on May 2, 2014, and the seizure of the Trade Union building.

One of those present at the film’s premiere was Serhiy Panteleyev, Head of the Odesa Regional Police Investigative Department.  He spoke of the progress made in investigating the events of May 2, 2014 under a new team in recent months and said that the material which the journalists have compiled coincides with the investigators’ findings.

These were released on August 23 this year.  There are certainly questions that can be asked about the timing of their release, and why only bits from different conversations have been released.  While the chief players have tried to dismiss them, they have not actually denied their authenticity.  This would, in fact, be difficult, since it is easy to compare the men’s voices on these tapes and other recordings.

Glazyev can be heard clearly articulating the position that all uprisings need to appear to come from locals, with it particularly desirable for councils, etc. to appeal to Russia to intervene.  One of the conversations is with Russian politician Konstantin Zatulin who talks about paying different groups amounts of money “as promised”.   Zatulin specifically names ‘Odesa Druzhyna’ as the organization in Odesa with which they are working.

There are exchanges with three people speaking from Odesa in early March when an attempt was made to seize control of the Odesa state administration: Kirill Frolov, a Russian national from the pro-Russian group calling itself the Union of Orthodox Citizens of Ukraine; Valery Kaurov, a Ukrainian from the same ‘Union’; and Denis Yatsyuk, one of the leaders of ‘Odesa Druzhyna’.

The film explains that Odesa Druzhyna appeared for the first time in late February 2014, with its leader Maidanek [Odinov] and other main figures coming from the neo-Nazi ‘Slavonic Unity’ organization.

The film quotes Anton Raevsky, a Russian neo-Nazi who in the Spring of 2014, played an active role in Odesa Druzhyna.  He later became disillusioned with the attempts to seize what Putin and Russia began calling ‘Novorossiya’, which included both Donbas and Odesa.  On the first anniversary of the 2 May 2014 tragedy, he wrote that Odinov had in March travelled to Crimea and met with Sergei Aksyonov, the marginal pro-Russian politician installed as leader after Russian soldiers invaded.  “They held talks about the further actions of the Odesa anti-Maidan movement. Aksyonov personally gave guarantees and promised that so-called ‘little green men’ [the soldiers without insignia] would still arrive in Odesa.”

Raevsky explains that they learned of this from Serhiy Dolzhenkov - leader of the combatant wing of Odesa Druzhyna and one of the few people still in custody over his alleged role during the events on May 2.  Raevsky says that Dolzhenkov told them about the trips because they were impatient and wanted to begin proper fighting.  “We believed that Russian forces would enter Odesa and the Crimean scenario would be repeated. Those who died in the Trade Union building also believed that …”, Raevsky writes.

There was a rally of around 5 thousand pro-Russian supporters on Kulikove Pole, including members of Odesa Druzhyna, armed with sticks, etc.

There is a conversation on the Glazyev tapes, dated March 1, between Glazyev and Frolov, in which Glazyev indicates that rallies are not enough.  He says that there needs to be a session of the Regional State Administration where they declare the post-Maidan government in Kyiv illegitimate.  Frolov expressed concern that the council members might not come, but is told that there have been such sessions in Kharkiv and Donetsk, and it must happen in Odesa.

Frolov comes back with Denis Yatsyuk as one of the people ready to storm the administration and appeal for ‘help’ to Russia.  Yatsyuk tells Glazyev that “we have people who in principle are ready to act, but who need some specific, clear and understandable recommendations”.  They also need guarantees, he says, and is told by Glazyev that the Council of the Federation has just voted in the President’s decree.  Neither man spells out which decree, but it is clear that what is meant is the ominous carte blanche given on March 1, 2014, for Russian forces to be sent into other countries.  Therefore, Glazyev says, “this is very serious, and you’ll be supported, don’t worry.”  He stresses that there need to be mass appeals directly to Putin asking him, Russia to defend them.   They must, however, also organize a decision from an extraordinary session of the regional council.

Although the film produced for Dumskaya TV does not go into detail, Dumskaya journalists earlier pointed out that Glazyev’s instructions were partially carried out.  At the meeting on March 1, a referendum was demanded and a meeting outside the regional council two days later.  Valery Kaurov was present at the rally and also called Glazyev’s office to tell him that they had stormed the building and “need help”.

Events did not go as planned, though no thanks to the then governor of Odesa Mykola Skoryk who, without any need, did agree to call an extraordinary session of the regional council.

During the session, the building was surrounded by anti-Maidan activists who blocked all the exits, while Kaurov and Anton Davydchenko tried to put the proposals for declaring an ‘Odesa people’s republic’ and announcing a ‘referendum’.

They were stopped and thrown out of the hall by three of the deputies.  By that stage pro-Ukrainian Odesa residents had also begun gathering outside, and the scenario turned quite different.  The regional council in fact became the first council in Ukraine to vote a resolution condemning Russian aggression and the incursion of any foreign military on Ukrainian territory.

The clear understanding from the tapes is that the actions are being financed and coordinated by Putin’s adviser Glazyev, together with Zatulin and Frolov.

This also corresponds with the account given back in 2015 by Serhiy Rudyk, one of the activists from Odesa Druzhyna who is facing charges over the May 2 disturbances.  He told the 2 May Group, a civic initiative investigating the events of that day, that the anti-Maidan protests on Kulikovo Pole (in front of the Trade Union Building) in the Spring of 2014 were paid for “by Moscow”*.  He named specific amounts paid for living at the anti-Maidan camp, and mentioned rumours that Moscow paid 2 million dollars for the entire ‘Kulikovo Pole project’.

It is known, from Odinov’s own admission, that he returned from Moscow literally on the eve of the disturbances on May 2. The investigators have learned that he visited the Crimean government buildings several times during this period.

The film’s authors stress that they cannot say who financed such trips and what their purpose was.  Their timing, however, certainly demands scrutiny. It was Odesa Druzhyna that was behind the unprovoked attack on a peaceful pro-Ukrainian procession on May 2.  Datsyuk was directly involved in calling on supporters to join in the attack.

Yevgeny Mefodoov, a Russian national charged over the disturbances has consistently claimed that he was on Kulikovo Pole by chance.  In fact, he is shown in the film at the March Odesa Druzhyna march close by fellow Russian Raevsky.

According to the Head Investigator, Serhiy Panteleyev, they have tracked down phone calls made both on May 2 and before.  It is clear from these that calls were made both to Russia and to neighbouring Russian-controlled Transnistria.

While Kaurov was not physically present on Kulikovo Pole, the film’s authors believe that it was he who initiated the seizure of the Trade Union building on Kulikovo Pole, with his people from the ‘Orthodox wing of the anti-Maidan tent protests actively involved in seizing the building.

The role of Odesa Druzhyna both in March and on May 2 is undisputed.  While both Glazyev and Zatulin have scorned the tapes, the fact is that their voices are on them.  The degree to which the disturbances in the centre of Odesa on May 2 slipped out of control, and the failure by the emergency services to react swiftly to the fire in the Trade Union Building which killed 42 of the victims could surely not have been scripted in advance.

Russia instead chose to push a narrative in which Ukrainian ‘fascists’ were supposed to have ‘attacked’ and then deliberately burned people alive.  Glazyev has played a role in pushing this lie, as indeed has Putin who slipped it into an interview for Bloomberg in early September.

All independent studies, including that commissioned by the Council of Europe have refuted any such claims.  Both Russia’s leaders and the pro-Kremlin media have ignored this, instead expending large amounts of money on propaganda films and even a travelling exhibition which push an ’Odesa massacre’ narrative, with this purportedly the work of ’Ukrainian fascists’.  The cynicism is flagrant given the substantial evidence indicating that Russia financed and gave orders to a motley bunch of neo-Nazis whose Odesa Druzhyna played such a tragically destructive role in the Spring of 2014.