Russia’s Supreme Court rules that the USSR did not invade Poland in 1939Russian fined for reposting that the USSR & Nazi Germany invaded PolandRussia says Poland, not USSR, was Hitler’s Ally and Responsible for HolocaustKremlin-funded Sputnik Int. claims West criticizes Stalin to weaken Russia & its leadershipKremlin’s proxies purge memory of victims of Holodomor and political repressionRussia’s ’new approach’ to Stalin and extended secrecy about his victimsStalin Museum: Putin’s Russia Immortalizes Bloody DictatorAnger and Protest over Stalin Monument in YaltaPortrait of Stalin appears in Russian-occupied CrimeaStalingrad as latest step in re-glorification of tyrantNeo-Nazis in Moscow’s ServicePro-Russian separatists start their own anti-Semitic TV channelPro-Russian, anti-Roma, anti-Semitic and hunting out Ukrainian speakersThe Donetsk anti-Semitic leaflets – what should not be overlookedEast Ukraine crisis and the ’fascist’ matrixRussia continues its false narrative as defender of oppressed minorities in UkraineRussian propaganda claims Jewish organizations supporting Maidan are bringing on "second Holocaust"The Crimean referendum’s neo-Nazi observersPutin’s Neo-Nazi HelpersChief Rabbi and others dismiss Putin’s “anti-Semitic extremist” claims
• Topics / Politics and human rights 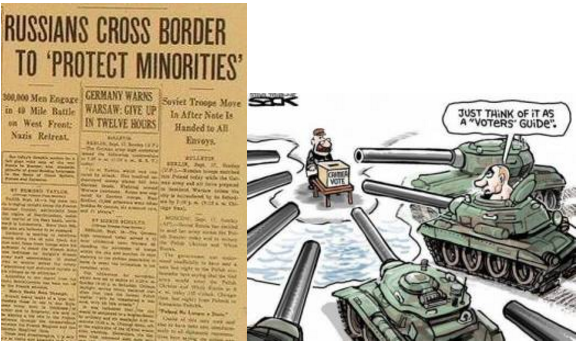 Newspaper article from 1939 from @Exen,   Putin in a tank cartoon surrounding ’referendum’ voter from March 2014

It is 77 years since the Soviet Union invaded what was then Poland, and two and a half years since Russian troops seized control of Ukrainian Crimea.  Both Soviet dictator Joseph Stalin and Russian President Vladimir Putin presented their invasions as ‘protecting ethnic minorities’.  They, in fact, denied any invasion at all.

Putin’s Russia is now going much further.  On Sept 1, 2016, Russia’s Supreme Court effectively ruled that the USSR had not invaded Poland in 1939.   It rejected an appeal against the fine imposed on blogger Vladimir Luzgin.  He had reposted a text which states, correctly, that the Soviet Union collaborated with Nazi Germany and invaded Poland.

There are two criminal prosecutions now underway in Russian-occupied Crimea of Ukrainians directly prosecuted for insisting that Crimea is not Russia.

Crimean Tatar leader Ilmi Umerov and Crimean journalist Mykola Semena are both charged with making ‘public calls to action aimed at violating Russia’s territory integrity’.  Umerov’s prosecution is over an interview in which he said that Russia must be made to leave Crimea and Donbas.  Semena’s supposed ‘separatism’ stems from an article in which he supported the civic blockade of Crimea, initiated by Crimean Tatar leaders with specific human rights demands, including the release of all political prisoners, jailed since Russia’s invasion.  There are also Russian nationals, such as Tatar leader Rafis Kashapov, who are now imprisoned for criticizing Russia’s invasion and occupation of Crimea.

Whether the Kremlin likes it or not, the Molotov-Ribbentrop Secret Protocols, by which Poland was carved up between the USSR and Germany, are not up for negotiation, but are historical fact.

Putin has, unfortunately, had more success twisting the story on Russia’s invasion of Crimea.  This is galling since we are dealing with events which the current generation saw unfold, and because Putin has used many of the same tricks exposed in all history textbooks.

Moscow initially claimed that ethnic Russians were at risk in Crimea following the end of Euromaidan and ex-President Viktor Yanukovych’s flight to Russia.  There was no evidence of any bloodshed, nor any danger of such.

Yet on March 1, 2014, 2 days after Russian soldiers without insignia (and at that stage denied by Moscow) seized control in Crimea, Putin obtained authority from Russia’s upper house of parliament to use force “to protect ethnic Russians in Crimea”.

The marginal pro-Russian politician Sergei Aksyonov who was installed at gunpoint as Crimean ‘leader’ by Russian soldiers with machine guns then announced a ‘referendum’.  This farcical event was organized within 10 days, gave no option for the status quo and was ‘observed’ by members of neo-Nazi, fascist and some far left European parties.  All those invited were known for their pro-Kremlin position and they accordingly came up with effusive praise about this so-called ‘expression of the people’s will’.  The event was boycotted by the vast majority of Crimean Tatars and ethnic Ukrainians, and even Putin’s own Human Rights Council has acknowledged that the supposedly overwhelming result in favour of ‘re-joining Russia’ was falsified, and that the result was not in favour of annexation.

It was to be expected that Putin would push his ‘referendum reflecting the will of the Crimean people’ narrative.  Stalin never admitted to invading other countries’ territory either.

It is still frustrating how very easily he gets away with this.  In a recent Bloomberg interview, he repeated the lie about the will of the people, and then again claimed the need to avert an alleged bloodbath.  He even used a cynical lie pushed by Kremlin-funded propaganda about the disturbances and fire in Odesa on May 2, 2014.  This was not challenged, nor was his deliberate misrepresentation of the facts about the so-called ‘referendum’.  He actually claimed that the soldiers were there to ‘guarantee safe voting’ in an event announced 8 days after Russian soldiers had invaded.

The western media have largely acquiesced with this false narrative, or at least failed to challenge it.  Perhaps most terrifyingly, 77 years after the invasion of Poland unleashed unimaginable horror on the world, the narrative has been swallowed and is now being repeated by one of the main candidates in the US Presidential elections.  Donald Trump’s motives remain worryingly unclear.  Not so the reasons why Moscow is so actively supporting the victory of a candidate who has indicated, among other things, that, if elected, he would recognize Ukrainian Crimea as ‘Russian’.