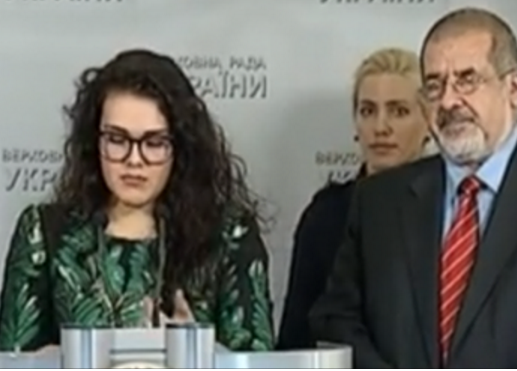 Ukrainian parliamentarians and international organizations have been urged to keep Russian-occupied Crimea on the agenda and warned that a new escalation in repression against Crimean Tatars is probable once the ban on the Crimean Tatar Mejlis or representative assembly comes into effect.

The original court ruling banning the Mejlis – the self-governing body of Crimea’s main indigenous people, as ‘extremist’, was in April.  It was immediately appealed, and has therefore not officially taken effect.

The ban received international condemnation and was clearly recognized as being over the Mejlis’ opposition to Russia’s occupation of Crimea.  The appeal hearing is, unfortunately, almost a formality, with the Mejlis viewing it largely as a necessary stage before approaching the European Court of Human Rights.  The Court in Strasbourg will surely find in the Mejlis’ favour, but not soon, and this is the problem.  There is already overt repression, with one Mejlis leader Akhtem Chiygoz having been held in detention now for 18 months.  A second Deputy Head, Ilmi Umerov is facing a potential 5-year sentence on equally surreal charges and was recently subjected to punitive psychiatry.

Umerov’s daughter Ayshe Umerova addressed Ukrainian parliamentarians on Sept 22, stressing how important it is that the issue of Crimea under Russian occupation is constantly raised.  The entire Crimean Tatar people have become hostages, she said, and there is likely to be a new spiral of repression after the ban on the Mejlis comes into force.

Nariman Dzhelyal, First Deputy Head of the Mejlis, recently gave an interview to the Russian Kommersant newspaper in which he spoke of the Russian authorities’ unwillingness to engage in any kind of dialogue concerning Crimean Tatar rights, including their right to self-determination and to recognition as the indigenous people of Crimea.  The most they’re ready for is to not deny the right of the Crimean Tatars or other ethnic groups to cultural and spiritual development.

Even that, however, comes with many qualifications.  There are, for example, official Muslim institutions, and then there are Muslims who want to practise their faiths in ways outside those official bodies. “In Russia such behaviour is often treated as extremism, and such people begin to face persecution.”   This, he says, was something unusual for Crimea.

There is pressure on different people under Russian occupation, but activists are particularly targeted.  Dzhelyal stresses that he is not just talking about the usual ‘delights’, like being followed and having your phone tapped.  Nor even the searches constantly carried out under various pretexts and problems if you just try to drive with a Crimean Tatar flag on your car.

There is much worse.  It is four months since his friend Ervin Ibragimov, a Crimean Tatar activist and member of the World Congress of Crimean Tatars, was abducted from near his home in Bakhchysarai.

“It’s absurd when the FSB talks in such situations about provocation from Ukrainian security services.  Crimea is buzzing with Russian military and security services”.  This was the latest of between 15 and 20 abductions.  The de facto authorities’ assertion that the men could have gone off to fight for the so-called Islamic State are cynical and lack any credibility.  There is video footage of Ibragimov’s abduction and all the missing men’s documents were at home (details of the lies here).

“So how do the Russian authorities expect Crimean Tatars to view them after all of this?”, Dzhelyal asks. While there is a general trend for the Russian authorities to be crushing any form of civic activism, the situation in occupied Crimea is specific, with Crimean Tatars, pro-Ukrainian activists and journalists suspect because of their position regarding Russia’s annexation of Crimea.

Attempts are made to pretend there is consensus by pointing to the relatively small number of Crimean Tatars who chose to collaborate with the occupation authorities.

The problem is not just in pressure on the Mejlis.  Freedom of speech, of peaceful assembly, etc. have been curtailed. The situation in schools is much worse, with pressure brought to bear on parents not to ask for their children to study in their native language.

Crimean Tatars are the indigenous people of Crimea, yet their fate is being determined not just without consultation, but by force, which is in breach of international law, Dzhelyal stresses.

There can never be 100% support for any structure, however even before annexation, one of the surveys taken found around 70% support for the Crimean Tatar Mejlis as representative body.  Since then, the Mejlis has become a kind of symbol which is supported by many Crimean Tatars. It is Russia as occupier that has made it impossible to measure the level of support.

Within months of Russia’s annexation, veteran Crimean Tatar leader Mustafa Dzhemiliev and the Head of the Mejlis, Refat Chubarov had been banned from their homeland.  Repression increased in September 2014, after the Mejlis called on all Crimeans to boycott elections organized by the occupation regime.  The Mejlis was first subjected to an armed search, then evicted from its headquarters in Simferopol.  in September 2014, Soon afterwards, Akhtem Chiygoz was arrested.

Attempts to present the Crimean Tatar Mejlis and its leaders as ‘extremist’ had begun soon after the first offensive in September 2014, but intensified after Dzhemiliev and Chubarov initiated the Civic Blockade of Crimea in September 2015, with legitimate human rights demands. Although neither the Mejlis as representative body, nor individual members, were directly involved, the accusations and direct members of intimidation increased significantly.

The criminalization of the Mejlis as ‘extremist’ was carried out in stages, doubtless in order to see how the West reacted.  They scarcely did at all, and Russia therefore moved from vague threats to specific action, with the ‘court application’ for a ban  first lodged in February. The ban was then made a fait accompli on April 13 when the de facto prosecutor Natalya Poklonskaya announced that she was ‘suspending’ the Mejlis without a court ruling.  Russia’s justice ministry then also saw no need to await a court ruling and on April 18 added the Mejlis to its list of “civic or religious organizations whose activities have been suspended due to their extremist activities.”