Mykola Semena, a 66-year-old Crimean journalist has been refused permission to travel to Kyiv for an urgently needed operation following a spinal injury.  Without the operation, Semena could face irreparable damage to his health, making him an invalid. 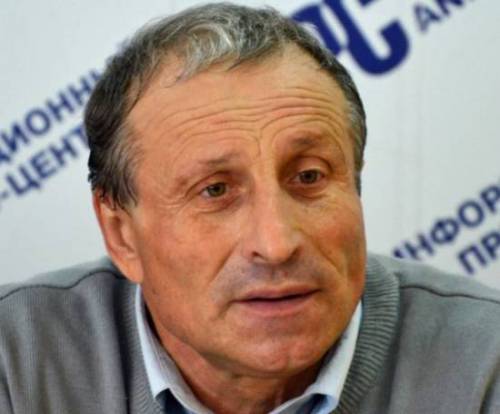 Semena is facing prosecution for supposed ‘public calls to action aimed at violating Russia’s territorial integrity’.  This is over an article in which he expressed support for the civic blockade of Crimea as one of the means of ensuring an end to Russian occupation.  He is one of an ever-increasing number of people charged under the new norm which came into force in May 2014, and which has been used mainly against critics of Russia’s invasion and annexation of Crimea. The charges could carry a 5-year prison sentence, and he has been under a signed undertaking not to leave his home area since April.

Semena had the opportunity to receive proper treatment in the Department of Spinal Surgery in the renowned Romadanov Institute of Neurosurgery in Kyiv.  His lawyer, Andrei Sabinin, had therefore applied for him to be allowed to temporarily leave Crimea.  The application was made on August 23, and the rejection by FSB investigator Alexander Parshutin dated just 2 days later, however there was clearly a delay in sending it off.  Sabinin has now posted the rejection, and reacted with scorn to the claim made that Semena could get the treatment he requires in Crimea.  It is a wonder, he suggests, that they didn’t propose that he seeks treatment behind bars.

There have been calls for Semena to be allowed to leave the peninsula both from Ukrainian colleagues and journalist unions, and from international bodies, such as the International and European Federation of Journalists.  The latter issued a statement on September 2, urging the Russian authorities to allow Semena to receive the treatment and mentioning that Semena’s case has been submitted to the Council of Europe Platform for promoting the safety and protection of journalists.

It seems clear that Semena’s prosecution is intended as a warning to all journalists remaining in Crimea, and there will be no let-up in repressive measures.

Certainly there was no delay in adding Semena’s name to Russia’s huge list of supposed ‘Terrorists and Extremists’.  This has immediate and very practical consequences with the person’s bank accounts, for example, being frozen.

Like Ukrainian filmmaker Oleg Sentsov, civic activist Oleksandr Kolchenko and many others, the lack of a conviction meant nothing.  This does not necessarily only demonstrate the contempt shown for the presumption of innocence.  Thus far, not one person charged under Russia’s dangerously broad norms on ‘promoting separatism’, ‘extremism’, etc. appears to have been acquitted.

The case has highlighted the degree of KGB-level surveillance which is almost certainly used against all those whom Russia views as dissidents in occupied Crimea.

FSB searches were carried out of the homes of Semena and six other journalists on April 19, 2016.  In Semena’s case, computer technology was removed, as well as what the de facto prosecutor claimed to be “documents indicating preparation of an article of an extremist nature”.  He was charged, as mentioned with ‘public calls via the media / Internet to violate Russian territorial integrity’ under Article 280.1 § 2.

Semena is alleged to have “made statements calling for isolationist measures, including military operations, to be carried out in relation to the peninsula and its residents”

He expressed only support for the Civic Blockade of Crimea which was initiated by Crimean Tatar leaders in exile with very specific human rights demands.  Though there were problems with how it was carried out, it was a peaceful action which highlighted the degree to which Crimea is organically linked with and dependent on mainland Ukraine for food, water and power.

The blockade led to an intensification in repressive measures, particularly against Crimean Tatars, but also, as we see, against journalists daring to express support.

He used ‘military’ language about the Blockade, but very clearly as a metaphor for the degree of determination and organization involved.

Semena has spoken of noticing intense surveillance for some time.  He had long been aware of being followed, and of having his conversations overheard, however the prosecution made it clear just how sweeping the surveillance was.  The article was sent to Krym.Realii on Sept 11, 2015, with all record of the email and of the article being immediately destroyed.

During the first interrogation in April, Semena discovered that the exact time that the article had been sent was known.  There are also screenshots, meaning that somebody was following his movements on his computer.

Semena’s trial is expected in the autumn, with a conviction unfortunately likely.  Whatever the terminology used, Semena is being prosecuted for opposing – as does the entire democratic world – Russian occupation of Semena’s native Crimea.