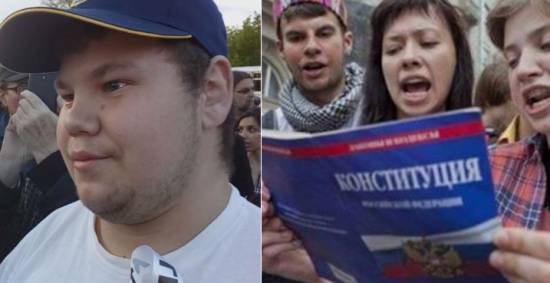 Viktor Kapitonov, a young Moscow activist, has been fined 250 thousand roubles (around 3.5 thousand EUR) for a supposed ‘repeat infringement’ of the rules for holding a public event.  He and four other people were detained on Sept. 12 for reading aloud Russia’s Constitution, the much ignored highest law in the land which guarantees the right to freedom of peaceful assembly.

Viktor was detained outside the State Duma together with Alexei Dmitriev, Igor Klochkov, Svetlana Novoselova and Ludmila Rumeta.  They were taken to a local police station where an ambulance needed to be called for one of the two young women.  It is not clear whether protocols (of so-called administrative offences) were drawn up against all of them.  In Kapitonov’s case, his reading of the Constitution was treated as a ‘repeated infringement of organization of a public event’ under Article 20.2 of the Code of Administrative Offences.

It is certainly not Viktor Kapitonov’s first assertion of his constitutional rights.

Viktor’s disability has not prevented OMON riot police from using gratuitous levels of force against him at various peaceful events.

On Bolotnaya Square that day, the OMON officers detained a number of activists with their methods and the lack of any justification easily assessed in the video footage here.

Kapitonov says that he simply asked the officers to identify themselves, for which he too was detained.

At the court hearing, one of the OMON officers was asked what Kapitonov had been doing to warrant his detention.  He claimed that the young man had been detained “for anti-government slogans”.  There had been none, Kapitonov stresses, only his request for the officers to show their ID.

Kapitonov says that the judge at his hearing had either not got enough sleep or was just in a bad mood. She asked the OMON officer “if he could repeat the slogans”.  When the man answered that he couldn’t, there was laughter from the courtroom.  The judge herself for a second laughed, but then got annoyed, and threw everybody out, leaving only Kapitonov and the OMON officers.

The fine, the judge said, was lower because Kapitonov is disabled.  He told Grani.ru at the time that they could possibly take half his pension away, and said it would take years to try to repay the figure.  He was also against paying the fine on principle, seeing this as somehow seeming to recognize guilt which he categorically rejects.

He rejects fear in the same way.  Otherwise everybody will be afraid, he says.

Viktor Kapitonov was also active in his support for imprisoned Ukrainian political prisoner Nadiya Savchenko.  He can be heard here, singing a song in support of Savchenko near Solovki Stone on Lubanka Square [opposite the old KGB, new FSB building].

According to Russia’s draconian anti-protest laws, three administrative penalties within 6 months can lead to criminal prosecution and imprisonment.  Viktor Kapitonov is only one penalty short of that number, meaning that he could end up facing criminal liability for such supposed ‘infringements’ as reading the Russian Constitution.