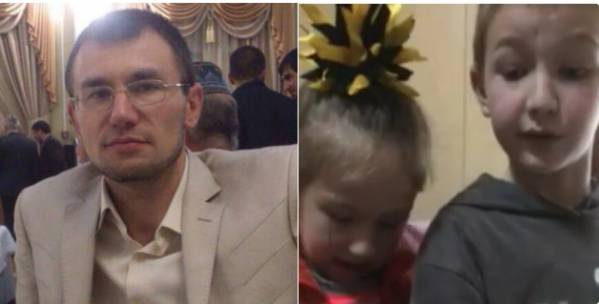 This is not the first time that the family of rights activist Emir-Huseyn Kuku has been targeted.  Back in April this year, less than 2 months after Kuku was arrested together with 3 other Crimean Muslims, an FSB officer turned up at 9-year-old Bekir’s school and took him aside.  The man told Bekir that his father had “got involved with bad men” and would spend 10-12 years in prison.

It was not only the Kuku children who were subjected to such distressing visitations, however other families were frightened of reprisals if, like the Kuku family, they made a formal complaint   No attempt was made to address the substance of the complaint, with the de facto authorities claiming that they could not identify the person who had turned up at Bekir’s school, although they had been given his full name.

The reprisals have been swift.  Kuku’s lawyer Alexander Popkov reports that a supposed ‘check’ is now being carried out.  The claim is that the visitation by a man they are pretending to be unable to find was made possible only because “Kuku is not properly fulfilling his parental duties”.

It is hard to do so when imprisoned on absolutely fabricated charges, and when your children are not even allowed to see their father during the court detention hearings.

The inspector on juvenile cases has now demanded that Bekir and 5-year-old Safiyeka be brought to her to provide ‘explanations’ against their father.  When she met with a refusal to bring them, she started resorted to all kinds of tricks to catch the children without their mother.  On Sept 26 she turned up at school and arranged that the children should be told to come two hours earlier.  They are also trying to collect references about the family, and the children.  Popkov reminded her by telephone that such methods of ‘catching children’ are against the law.  She claimed that this was a ‘threat’ on his part and demanded that he explain as the family’s lawyer why the children were refusing to give the supposed ‘explanations’.  She also changes her story from claiming that the ‘explanations’ were required by the prosecutor’s office, to saying that the Investigative Committee have demanded them.

The children were initially too frightened to go to school, however they did return, together with relatives, on Wednesday.  The adults were in part simply worried that if the children didn’t go to school, men in masks and with machine guns could be sent to bring the children by force.

These are not empty phrases. Kuku and 13 other Crimean Muslims, almost all Crimean Tatar, are in custody following armed searches by masked men who often forced their way into homes in which children had been fast asleep.  The force was totally gratuitous, with nobody showing any resistance and many children, some of them quite small, were totally traumatized.  The unsubstantiated charges are of involvement in the peaceful Hizb ut-Tahrir organization which Russia has claimed is ‘terrorist’ without providing any justification and which is legal in Ukraine and other countries.

This new assault on the Kuku family is particularly offensive as it targets small children, however the tactics have already been seen with respect to Kuku.  He was also active in defending human rights under Russian occupation, then later his own right to answers, and is now in jail, facing a potentially long sentence.

Kuku monitored human rights abuses in the Yalta region for the Crimean Contact Group on Human Rights.  He had become involved following the abductions and disappearances of young Crimean Tatars in the months after Russia’s invasion and annexation of Crimea.

The first major trouble came on April 20, 2015.  Kuku has himself described what happened and a brief account can be found here.  He was attacked from behind by two men who began silently beating him.  There are strong grounds for believing that the men were planning to abduct him.  The plan was foiled since Kuku was able to shout and a person driving past recognized his voice and stopped.  Others then also gathered demanding to know what his assailants were up to.  The men then claimed that they were ‘police’, and soon afterwards a white van drove up.  At least four masked men in full military gear with machine guns jumped out and demanded that the crowd disperse.  They violently forced Kuku into the van, and drove off, followed by some of those who’d stopped to help Kuku and feared he was being abducted.

In the van they proceeded to beat him, and he heard one of them on the phone tell somebody that they were being followed and needed to change cars.  The masked men were angry that he had attracted a crowd, and kept consulting with somebody by telephone about what to do.  It seems at that point that the plan changed, and they suddenly announced that they needed to carry out a search of his home.

He and Popkov made completely justified attempts to get an investigation into these events.

Instead, in December 2015, the occupation authorities first threatened ‘extremism’ charges over material posted on his his Facebook page.  There was no mention then of Hizb ut-Tahrir, yet just two months later, on Feb 11, 2016, Kuku; Muslim Aliev, Enver Bekirov and Vadim Siruk were arrested after armed searches, which Kompaneitsev took part in.

Now Kuku’s children are also under attack. There are absolutely no grounds for taking the children away from their parents, but the methods now being applied suggest that anything is possible, and international pressure on Russia  is vital.