Babyn Yar: "Did the sun really not pale at the sight of that horror? " 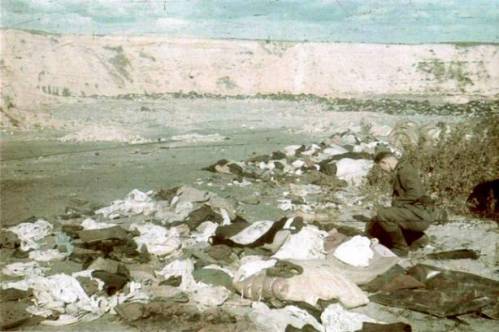 From a Nazi film at the beginning of October, 1941

Around 150 people found refuge with non-Jewish friends or neighbours.  How many were refused will never be known.  Reports say that many of the families who came to Babyn Yar did so hoping that nothing terrible could be planned on the eve of Yom Kippur which fell that year on Oct 1.  People had been told to bring warm clothes, and probably hoped that they were being deported, since there was a railway nearby.

On the third anniversary in 1944 (the Nazis had been driven out in Nov 1943), Itsik Kipnis wrote the following (in Yiddish).

“Let us walk that entire journey.  We’ll walk along those streets that were filled to the limit with our then still alive brothers and sisters…. They walked, deceived and crushed, huddled in small groups.  They aroused horror in those who watched them, although some were dressed in the best clothes they had. So many people, after all, had been thrown out onto the streets, such a mass of people, you could say the entire people!”

“Less than four years have passed since we were home. And now we have met, all together, on this day of mourning, on this sad procession.  We have arrived and joined together from all corners of the country to our liberated Home. And our native city, like our mother, should embrace us, cheer us up and return us to live. The road was hard and covered with thorns, and the time of separation seeped in the bitterness and pain of loss.

The sky is so clear, it is so good to feel the warmth and richness of the autumn colours, the golden leaves on the trees and on the ground, their sad parting greetings to the summer that is ending!   Did the city really glow in this way under the Germans? Impossible! And the road to Babyn Yar three years ago?  Did the sun really not pale at the sight of that horror? “

Those words were soon banned by the Soviet regime, as were most details about the Holocaust in Nazi-occupied Ukraine.

Historian Anatoly Podolsky writes that it was only after the collapse of the Soviet Union, and Ukraine’s Independence, that you could read Kipnis’ words, and those of others who told the truth about the Massacre.

There was a policy of enforced ‘forgetting’ about anything that didn’t suit the Soviet narrative about World War II and, in particular, about Jewish victims.  As Podolsky says, you talked only about ‘Soviet civilians’ and the ‘Soviet people’, with it positively prohibited to distinguish victims according to ethnic origin, etc.

Babyn Yar itself was not treated as a place of memory.  In the 1950s the authorities even ignored the few courageous voices demanding a monument and tried to make it into a rubbish dump.  This led to a catastrophic mudslide in 1961 which killed about 2 thousand people.

After a meeting initiated by Ukrainian dissidents on 29 September 1966, the 25th anniversary of the Massacre and the following year, the authorities finally acknowledged the need for some kind of monument.  Dishonest to the end, the 1968 monument was to the memory of “Soviet citizens during the period of the temporary German-Fascist occupation of 1941-1943”.  It was only in 1991, following Ukraine’s independence, that a Menorah was erected at Babyn Yar.

There has been no easy path since then, with the question of a general monument at Babyn Yar often arousing controversy, or rather unseemly arguments about other victims.  It is certainly true that the 100 thousand or more people murdered at Babyn Yar through the years of occupation, included 5 Roma camps, many Ukrainian nationalists, including the poet Olena Teliha; Soviet prisoners of war and others.

However 75 years ago, on September 29 and 30, 1941 34 thousand men, women and children were slaughtered because they were Jewish.