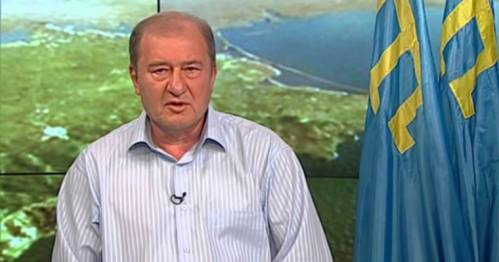 Ilmi Umerov, Deputy Head of the Crimean Tatar Mejlis and recent victim of punitive psychiatry has again been brought before a court in Russian-occupied Crimea.  This time he was ‘only’ fined 750 roubles [just over 10 EUR] however the reason and the timing are disturbingly cynical.

He and another member of the Mejlis, Ali Khamzin  received summonses in the last two days, with both fined (Khamzin 1 thousand roubles).  The Mejlis members were accused of having taken part “in a meeting of a civic organization banned in Russia”.  It is likely that other fines will be imposed over the assumed meeting which resulted in the formal expulsion of three members of the Mejlis who chose to collaborate with the occupation regime.  The FSB have all prominent Crimean Tatars under permanent surveillance and on Sept. 26, a number of members both of the Mejlis, and of the Qurultay, or National Congress of Crimean Tatars, received phone calls summoning them to the so-called Centre for Countering Extremism.  Many refused to go, saying they would await a written summons.  Those who did go say that the officials grilled them over how the decision on expulsion had been taken.

Now a court has accepted that this constituted an administrative offence.  The very terminology is incorrect since the Crimean Tatar Mejlis is not a ‘civic organization’, but  the self-governing body of the main indigenous people of Crimea.

The authoritative Memorial Human Rights Centre issued a statement on September 28 regarding the Supreme Court appeal hearing over the ban, at which its lawyers will be representing the Mejlis.  Memorial focuses on the nature of the Mejlis, whose 33 members are selected by an elected body – the Qurultay which is, in turn, elected by all Crimean Tatars.

This in no way corresponds to any ‘civic organization’ in the Russian Federation, they stress.   Such a body is, however, foreseen by Article 5 of the UN Convention on the Rights of Indigenous Peoples.  This states that:

According to Article 18, they have “the right to participate in decision-making in matters which would affect their rights, through representatives chosen by themselves in accordance with their own procedures…”

Russia’s respect for the rights of its own indigenous peoples, let alone those of the Crimean Tatars who in their vast majority oppose Russia’s occupation of their homeland, is purely on paper. In an interview recently, Nariman Dzhelyal, First Deputy Head of the Mejlis said that the Russian authorities are unwilling to engage in any kind of dialogue concerning Crimean Tatar rights, including their right to self-determination and to recognition as the indigenous people of Crimea.  The most they’re ready for is to not deny the right of the Crimean Tatars or other ethnic groups to cultural and spiritual development.

Even that needs to be qualified, since any move away from the ‘official’ position – on religion, for example, is likely to be stamped down upon as ‘extremist’.

In the Mejlis’ case, the alleged ‘extremism’ lies elsewhere: in its unwavering conviction that Crimea is a part of Ukraine and that Russia should end its occupation.  That has been enough for Russia to imprison one Mejlis leader Akhtem Chiygoz, and to charge Ilmi Umerov with ‘separatism’.

Fears that repressive measures will escalate once the Mejlis ban comes into force have been as good as confirmed in advance.  Nobody seriously expects Russia’s Supreme Court to do anything but rubberstamp the ban on Sept 29.  It is still telling that, in the fines imposed on Umerov and Khamzin, courts in Russian-occupied Crimea didn’t bother to even attempt any pretence.