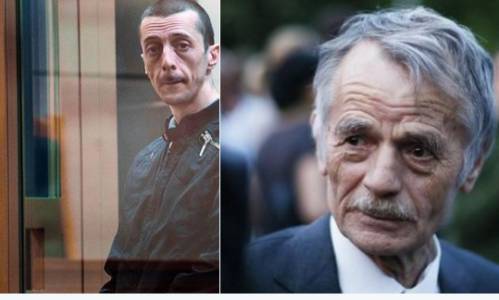 A Russian court has ordered that the son of veteran Crimean Tatar leader Mustafa Dzhemiliev be kept under ‘administrative surveillance’ for three years after his scheduled release on Nov 25.  His lawyer believes that this is a ploy to keep Khaiser Dzhemiliev hostage still longer in Russian-occupied Crimea. It effectively increases the young man’s sentence,   with the decision being announced at a court hearing on Sept. 15, about which Khaiser’s lawyer Nikolai Polozov was not informed.  According to the ruling, Khaiser Dzhemiliev will be prohibited from leaving Crimea, under a night curfew and will not be allowed to visit any bars, cafes, etc., unless working there, nor will he be able to attend any mass events.

This is a grave restriction of his liberty, yet Polozov knew nothing about it until the end of the month when he arrived to present the application for the young man to be released on parole.  That application, like all others, was rejected.  The decision on administrative surveillance will presumably be appealed, but there are no grounds for expecting a positive outcome.

Khaiser has been illegally imprisoned in Russia for over a year, and is constantly placed in punishment cells for no reason.  While avoiding any obvious physical abuse of the young man,  they are clearly using any formal ‘infringement’  as a pretext to impose penalties.  According to his lawyer, since he was first taken illegally to a prison colony in Russia’s Astrakhan region, he has spent over 210 days in punishment cells.  Polozov assumes that the aim is to isolate him from other prisoners, with all of this primarily aimed at putting pressure on Mustafa Dzhemiliev.

Polozov stresses that all material regarding treatment, etc. will be added to the application already with the European Court of Human Rights.

At least Russia has finally, after 2 years of trying to foist Russian citizenship on Khaiser Dzhemiliev, acknowledged that the young man is a Ukrainian national. Since he had made the formal statement which Russia demanded back in 2014, the pressure over this was especially cynical.  Russia also refused on at least one occasion to allow the Ukrainian consul to visit him in prison.

In February this year the Memorial Human Rights Centre condemned Russia’s use of Mustafa Dzhemiliev’s son as a hostage and demanded that he be returned to Ukraine.  They said that even in the context of the violations of international law linked with Russia’s annexation of Crimea, the fact that Khaiser Dzhemiliev was being held in a Russian prison was unprecedented.   There were absolutely no grounds for the Russian authorities to be involved in the case of a Ukrainian national convicted of committing a crime against another Ukrainian in Crimea in 2013.

There was one cheering development in May 2015 when a Russian jury rejected the charges of murder which Russian investigators had insisted on bringing.  The jury found Khaiser Dzhemiliev guilty of manslaughter through carelessness and of illegal possession of a weapon, as had the Ukrainian court.  It considered that he was worthy of leniency over the charge of possessing a firearm.

Khaiser Dzhemliev is no criminal.  In Ukraine he would have been freed by now on parole.  He is imprisoned in Russia illegally, and Russia is using all means, however illegitimate, to continue holding him hostage because of his father. 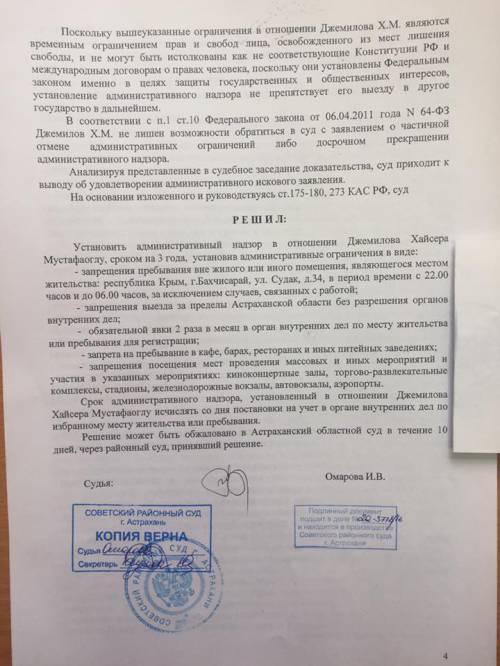 Last page of the ruling (Polozov notes that the judge was in such a hurry to issue the ruling, that a mistake slipped through - it is Crimea he is to be restricted to, not Astrakhan)
Share this
x