The self-styled ‘Donetsk and Luhansk people’s republics’ [DNR, LNR] held ‘primaries’ in Donetsk and Luhansk on Oct 2, claiming them to be preparation for the local elections demanded by the Minsk Agreement.  The event was effusively praised by around 20 ‘observers’, some of them already known for their far-right or extreme left views and unwavering pro-Russian position. 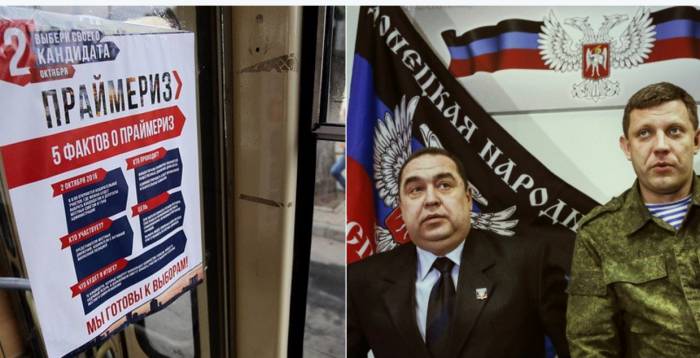 The agreement reached in Minsk unequivocally stipulates that local elections must be in accordance with Ukrainian legislation.  This means equal electoral rights for all parties, free access to the media, etc.  At present most Ukrainian media are banned in areas under militant control, and even visiting DNR or LNR can be dangerous for those with a firm pro-Ukrainian position, as Volodymyr Fomichov, held hostage since January 2016, learned to his cost.  It is clear from the militants’ behaviour that they would not be willing to allow real international observers in, and would not even provide the guarantees of safety that, for example, the OSCE would require.

In March 2016, DNR leader Alexander Zakharchenko openly stated that “It is absolutely unrealistic to hold elections in accordance with Ukrainian legislation and I am categorically against it”. He prefaced this by claiming that he was in favour of elections in accordance with international OSCE standards. These however also guarantee  universal suffrage; equal participation of all parties; non-discriminatory access of all media, etc.

In May, ‘primaries’ or ‘preliminary elections’ were announced, with Zakharchenko claiming that this would enable selection of “the worthiest candidates for local elections”.  In fact such a pre-selection already gives the lie to his claim that the later elections would be held in accordance with the Minsk Agreement, since neither the latter, nor Ukrainian legislation, would allow the militants to determine in advance who takes part.

Who the candidates are is not always clear, nor if anybody really cares who wins.  The whole exercise seemed to be about propaganda, and the pro-Kremlin Russian media were eager to oblige.

RIA Novosti asserted itself that the ‘primaries’ were in preparation for holding local elections, and went on to report one of the aims being “to demonstrate to the world community the possibility of holding elections in the self-declared republics which meet all norms”.

The Russian government-controlled agency claims that the “voting is taking place against the background of an unending military operation by Ukrainian fighters”. 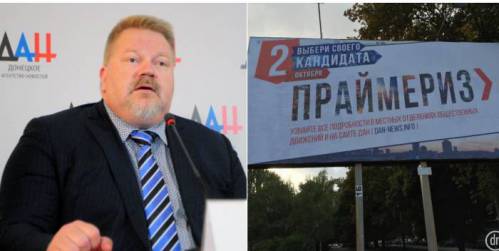 It also mentions that there were ‘foreign observers, including from EU countries following the preparation for this preparatory event.  “They stated”, RIA reports, “that the process met international standards and requirements.  No infringements were found.”

Once again the only ‘observers’ to be invited were people with a clear pro-Russian position.  Anton Shekhovtsov, a researcher on far right movements, has thus far succeeded in identifying 20 ‘observers’.  He notes that there were quite a lot of differences, probably because Mateusz Piskorski, the Polish coordinator of most ‘elections’ effectively orchestrated by Russia, was arrested in Poland a few months ago and remains in detention, suspected of spying for Russia.  There were a number of familiar faces, however, including German Manuel Ochsenreiter, the Editor of Zuerst, a neo-Nazi newspaper and a frequent guest on the Kremlin-funded English-language channel Russia Today, and David Hudziec, a Pole with far-right views who has long been running a Polish pro-militant website.

There were also two men - Miodrag Zarković from Serbia and Finn Johan Bäckman - who were, as reported, in Donetsk already in July.  Bäckman’s involvement in such electoral stunts, including the pseudo-referendum on Crimean annexation, goes back a long way, but it was clear in July that all other members of the ‘delegation’ - Zarković and two other Serbs, had been invited for approval, not impartial assessment.

The same was true on Oct 2.  Bäckman was quoted by the DNR official website as saying he was sure he was speaking for all ‘foreign observers’ in calling the primaries legal and democratic.

“I’m sure that my foreign colleagues will agree that you give us hope with your democratic processes since we in the West at present have a lot of problems with democracy and freedom of speech.  I think this is a very important moment from the point of view of international recognition of DNR”.

His view is unlikely to be shared by any international body or election watchdog, but then their views are never voiced on either militant or the pro-Kremlin Russian media.