No criminal proceedings were brought against the man who brutally attacked Ihor Movenko over Ukrainian symbols and an ‘Azov Battalion’ sticker on his bike.  The fact that only Movenko was punished after a totally unprovoked attack seems further confirmation that the assailant was a police officer – and of a terrifying level of impunity for attacks on Ukrainians. 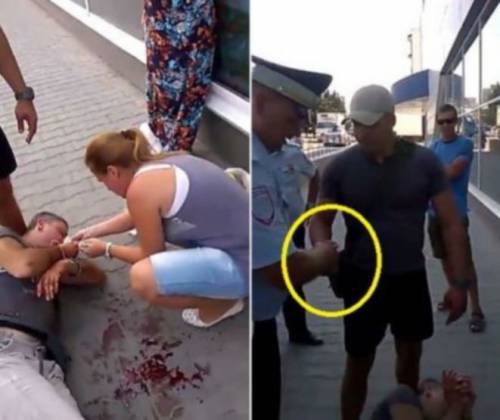 As reported, at around midday on Sept 7, 39-year-old Movenko was set upon by one individual after he stopped to get money out of a cash machine and then returned to his bike.  The man who attacked Movenko claimed to be from the police, though he did not show any ID.

It was only Movenko who sustained injuries and they were serious.  He was hospitalized, the Crimean Human Rights Group reports, with the doctors finding an open head injury, concussion, a skull fracture, a broken jaw, broken nose, eye injury and more.  He now needs a nose operation, and doctors have also advised him to get treatment from both a neurologist and a dentist.

It was quite evident that he had been attacked, yet it was Movenko who had his hands bound after the police appeared.  Judging by the surreal video here, it certainly seems that the police were on good terms with the assailant.  The officers even tried to stop Valentina Movenko, who had come as soon as somebody phoned her, from giving her husband some water as he lay on the ground, handcuffed and in obvious need of medical treatment.

The de facto authorities in occupied Crimea were swift to take Movenko to court.  He was fined 2 thousand roubles over the ‘Azov’ Battalion sticker which is now on Russia’s huge list of banned organizations.  Many Azov members have far-right views, however there is no reason for the ban at all, let alone a court hearing and fine for carrying a sticker.  Except that Crimea is currently under Russian occupation, and even symbols of an organization which is prohibited can incur administrative penalties.  Since de facto courts have been willing to sentence Ukrainians to 40 hours community work or a fine over Ukrainian flags, there are no grounds at all for expecting the fine over an Azov sticker to be overturned.

The fact that no criminal proceedings at all were initiated over a vicious attack which caused serious injury is seriously frightening.