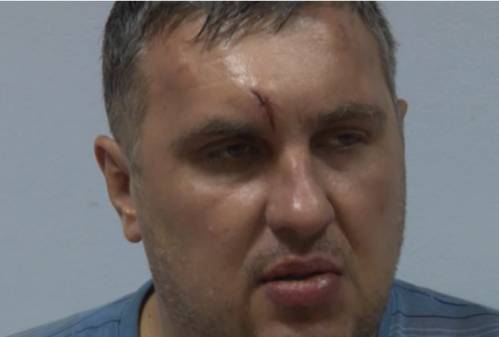 There is reason to believe that Yevhen Panov and Andriy Zakhtei, two Ukrainians held prisoner by the FSB in Russian-occupied Crimea have been taken to Russia.  Although there is no official confirmation, the Crimean Human Rights Group has spoken with both Zakhtei’s wife Oksana and Panov’s relatives.  They have been told that the men were moved, together with their belongings, though not where they have been taken.  This is of major concern given compelling evidence made public this week of the torture which Panov was subjected to, and Russia’s persistent attempts to deny the men access to lawyers of their choice.

Panov has been held prisoner since early August, yet was only allowed to see the independent lawyer appointed by his family almost 2 full months later.  At that meeting, Panov confirmed that he had given testimony under severe duress. Russia in the meantime has responded to the European Court of Human Rights demand for information, providing a list of Panov’s injuries. Rather bafflingly, the Court in Strasbourg accepted Moscow’s assurances that these would be investigated and did not demand that Panov be returned to mainland Ukraine.

Panov is one of at least three Ukrainians held in FSB custody after Russia’s attempt in early August to convince the world that Ukraine’s military intelligence had made ‘incursions’ and attacks on Ukrainian Crimea which Russia is illegally occupying. The FSB’s assertion that major incidents, including weapon fire from mainland Ukraine, had taken place during the nights from 6-7 and 7-8 August were backed only by videoed ‘confessions’, first by Panov, then by Zakhtei, and finally Ridvan Suleimanov.

Very little is known about Suleimanov’s arrest and where he is being held.  The secrecy is doubtless deliberate, as are the efforts to prevent the men seeing real lawyers.  Panov’s lawyer was presented with an unsigned scrap of paper on which Panov was supposed to have rejected his services.  There were clearly very strong grounds for concern, and at the request of his brother, Ihor Kotelyanets, the Ukrainian Helsinki Human Rights Union applied to the European Court of Human Rights to intervene.  The Court demanded information from Russia about the legal grounds for his detention, whether he had a lawyer and about any injuries.

The medical documents provided to the Court already constitute strong grounds for believing that Panov was tortured, and it is difficult to take Russia’s promise to investigate how he came by his injuries seriously.  Strasbourg’s involvement is likely to have been the reason why, after almost two months, the lawyer was finally allowed to see his client.

He found scars on his wrists from handcuffs and multiple bruises which correspond to the reports sent to Strasbourg.  These clearly indicate that he gave testimony under duress.

Panov has, in fact, confirmed this, giving harrowing details of the treatment he received, probably at the hands of FSB [Russian security service] officers between 7 and 12 August.

He did not see his torturers since a bag was taped over his head. During his seizure on Aug 7, he was struck on the forehead, with this visible even on the first video.  He explains that he answered questions on that video from a piece of paper prepared by FSB officers.

He was held, tightly handcuffed, for 7 days, and kept like this with his hands under his knees.  They thrust a stick, lifted him and lashed his shins with a metal pipe.  He also says that immediately after being taken prisoner, they beat him and used torture methods linked with his genitals.

He told the lawyer provided by the FSB about the torture, but has no idea whether the lawyer lodged a complaint.

Since the FSB prevented Panov seeing an independent lawyer for nearly two months, it is unfortunately safe to assume that the state-appointed person did nothing about such evidence of torture.

All of this is also disturbingly familiar.  Through such methods, the FSB obtained a ‘confession’, shown on Russian TV, in which Panov was heard saying that he had become part of a group, organized by Ukrainian intelligence, for acts of sabotage in Crimea.

There were no acts of sabotage, and the only actual incident appears to have involved a shootout by drunken Russian soldiers near the crossing between Crimea and mainland Ukraine.

His family were convinced from the outset that Panov, who is from Zaporizhya, had been abducted.  They pointed out that both because of the year Panov served in the Ukrainian Army in Donbas, and his attitude to Russia’s annexation, there was no way that he would have voluntarily crossed into Crimea.

Once Russia’s FSB has seized somebody, they do not let them go.  Such ‘confessions’ were used in May 2014 to concoct a ‘terrorist plot’ trial against Ukrainian filmmaker Oleg Sentsov; civic activist Oleksandr Kolchenko, Gennady Afanasyev and Oleksiy Chirniy.  The testimony tortured out of the latter two was literally all that there was in a trial that has been internationally condemned.  The Russian court ignored the courageous action by Afanasyev in standing up at the trial of Sentsov and Kolchenko and retracting all testimony as given under torture.  Sentsov was sentenced to 20 years, Kolchenko – 10.  Afanasyev then, and later, described in detail the torture he suffered, with this corresponding to the account given by Sentsov.

Both the torture and the denial of legal defence have been used against other Ukrainians such as Stanislav Klykh, Mykola Karpyuk, Valentin Vyhivsky and Serhiy Lytvynov.  Russia was even forced to withdraw the grotesque ‘war crimes charges’ brought against Lytvynov in 2014, after it was proven that he could not have committed them since neither the people nor the addresses provided had ever existed.  Russia then came up with equally absurd charges, and he remains imprisoned.

It is unclear how long the European Court of Human Rights has given Russia to prove that it is ‘investigating’ how Panov received the clear signs of torture.  It is to be hoped not very long, since there is every reason to assume that the FSB knows very well.