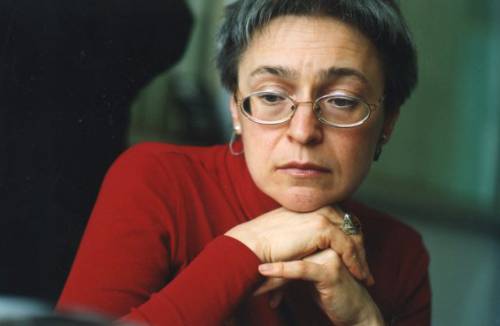 It is ten years on October 7 since Anna Politkovskaya, bitter Kremlin critic and voice for its victims, was gunned down in the stairwell of her apartment block in Moscow.  The journalist and human rights defender was murdered, coincidentally or not at all, on President Vladimir Putin’s birthday.

Back in 2006 there was immediate international reaction to the killing.  Only Putin remained silent for days.  A journalist in Germany finally forced a reaction out of him on October 12.  He found nothing better to say than that Politkovskaya’s murder had “done more damage to Russia’s reputation, than her reporting ever had”.

There were some arrests, even convictions, but those who ordered Anna Politkovskyaya’s murder have never been found – or even particularly looked for.  The same applies to the murderers of Boris Nemtsov, who would have been turning 57 on Oct. 9.  He was gunned down on a bridge directly facing the Kremlin on Feb 27, 2015 – the anniversary of Russia’s invasion of Crimea.   The trial of men who may well have been involved in carrying out the killing has just begun in Moscow.  There are no real answers as to who ordered the killing.

In both cases there is a ‘Chechen link’ and in both, hired killers were used.  Four of the five men convicted over Politkovskaya’s murder are Chechen, as are all suspects in the Nemtsov case.  The investigators last year came up with an insultingly implausible version, suggesting that Nemtsov had been murdered – not because of his implacable opposition to the Kremlin’s policies in Russia and its aggression against Ukraine, but because of a comment he had made in support of the Charlie Hebdo cartoonists killed by terrorists in Paris in early January.  The version proved totally unsustainable, but was probably intended to please.  After all, from around 30 minutes after the news of Nemtsov’s assassination broke, the Kremlin’s mouthpieces started pushing the line that Nemtsov was irrelevant, a has-been politician, etc.  As with Putin’s comment about Politkovskaya’s killing, the dominant theme was that the Kremlin and its main inhabitant had been more harmed by Nemtsov’s murder than by his activities.

Believe it if you can – about their murders, and those of many others, like human rights defender Natalya Estemirova.

Each death was tragic in itself, but in addition a bitter loss for those desperately in need of a voice.

Anna Politkovskaya had spoken out again and again over federal forces’ crimes in Chechnya, about the forced disappearances and abductions.

She had immediately set off for Beslan on Sept 1, 2004, to try to save the lives of well over a thousand children, their families and teachers, seized by terrorists.  She was poisoned on an Aeroflot flight, almost certainly to stop a person who had every chance of being heeded by the terrorists from reaching Beslan.

On Sept 3, the siege ended in bloody carnage after federal forces used tanks and heavy artillery to storm the building.

In September 2016, 5 mothers of Beslan victims were detained and prosecuted for wearing T-shirts reading Putin is the executioner of Beslan at a memorial service.

There has never been a proper investigation into how the terrorists had managed to hide such an arsenal in a school, and why a number of them had been released from prison shortly before the events.

Anna Politkovskaya’s voice would have been heard, asking the questions, defending the mothers against persecution.

Her voice would certainly have been heard, as was Boris Nemtsov’s, over Russia’s aggression against Ukraine.

It is sorely needed now too in occupied Crimea, with Russia increasingly using the same methods that it has applied for so long in Chechnya and Ingushetia.