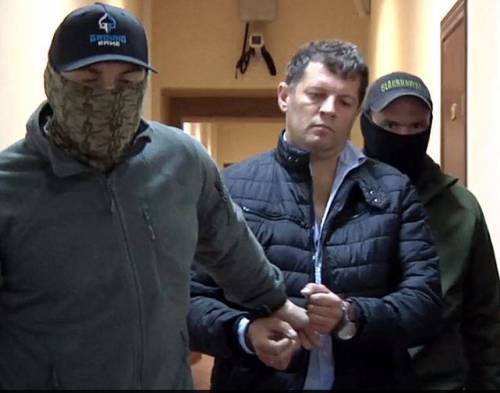 Ukraine’s Foreign Ministry has echoed earlier warnings from human rights groups and advised Ukrainian nationals to not visit Russia.  The advice came three days after journalist Roman Sushchenko became the latest Ukrainian to be seized, held incommunicado and accused of mystery ‘spying’.  From the video shots of Sushchenko being led by two masked FSB officers to the attempts to prevent him contacting his family and a lawyer, everything has been eerily reminiscent of all previous arrests since soon after Russia’s invasion of Crimea and military aggression in eastern Ukraine.

Sushchenko’s lawyer Mark Feygin has, after initial refusals, been allowed to see the journalist, but Ukraine’s consul is still, in gross breach of the law, being denied access.

It is known that Sushchenko arrived in Moscow on Sept 30, when his cousin and some other relatives live.  He was seized by FSB officers and held incommunicado for two days.  His whereabouts were first revealed by human rights monitors who came upon him while visiting Lefortovo remand prison.  It is unclear whether this was planned, or whether Sushchenko might have been held for much longer without anyone knowing where he was.  This is certainly no record for Russia’s FSB, who held Ukrainian political prisoners Mykola Karpyuk totally incommunicado for over a year and Stanislav Klykh for 10 months to torture out ‘confessions’, but it would have been the first time a journalist had been treated in this way.

Zoya Svetova, the prominent human rights activist who first reported Sushchenko’s whereabouts has noted that exactly the same thing happened two and a half years ago after she came upon Ukrainian filmmaker Oleg Sentsov in Lefortovo.  Both the FSB and Russian state media leapt into action. The lawyers representing Sentsov, Oleksandr Kolchenko and two other Crimeans believe that the FSB’s delay then was to make sure that the most obvious signs of torture had faded.

Russia had really not got its story worked out. That same morning RIA Novosti cited the Russian Foreign Ministry as saying that Sushchenko had not had journalist accreditation. Sushchenko had arrived to see relatives, not to carry out journalist activities.

The FSB’s story has been met with incredulity from colleagues and international journalist organizations.  On Oct 5 the International Press Institute (IPI) joined colleagues in calling for Sushchenko’s release.  They expressed “concern that the arrest was a politically motivated move to impact the ongoing conflict between the two countries”.

Feygin was only allowed to see the journalist on Oct 4, days after a court hearing which remanded him in custody for two months.

There have been numerous attempts to prevent Ukrainian prisoners from being defended by real lawyers, and not those appointed by the state to sign documents and, often, to persuade the person to ‘confess’. In cases involving ‘spying’ changes, the ploy generally works since Russia imposes total secrecy anyway.

Sushchenko told Feygin that he was only subjected to psychological pressure, but not physically ill-treated, it.  This again is in marked contrast to most of the prisoners held in Russia (aside from 74-year-old Yury Soloshenko and Nadiya Savchenko).

It seems, therefore, that the FSB is aware that this case will gain greater publicity and is perhaps not worried that the story seems so wildly implausible.

Dmitry Oreshkin, a well-known Russian political commentator, believes that this new arrest is aimed, firstly, at showing that the tense relations remain and that nobody should let down their guard.  It is, secondly, an attempt, as was the seizure and trial of Savchenko, to take a hostage in order to later do a deal.

The FSB, he says, are, in this way demonstrating their zeal and proving their worth, while also propping up the paranoia of their bosses, that they are surrounded by enemies.

He warns, however, that there has been a major shift in public opinion.  The euphoria over Crimea has gone, there are too many internal problems for high-profile arrests of supposed ‘enemies’ and ‘spies’ to arouse any outpourings of patriotic rhetoric or unite people.

The problem is that there are already at least 9 Ukrainian political prisoners held in Russia and an increasing number in Russian-occupied Crimea.  It is specifically because of Crimea that the situation is especially difficult.  Certainly Ukrainians would be well-advised to steer clear of Russia, but many have family in Crimea.  It is still unclear how Yevhen Panov, one of the latest Ukrainians to be imprisoned in Crimea, actually came to be in Crimea and it is possible that he was abducted from mainland Ukraine.

Russia’s lawlessness has become an immediate danger to Ukrainians.  When this is how a country’s security service ‘works’, with the courts guaranteed to convict however absurd the charges, nationals of other countries should probably also beware.