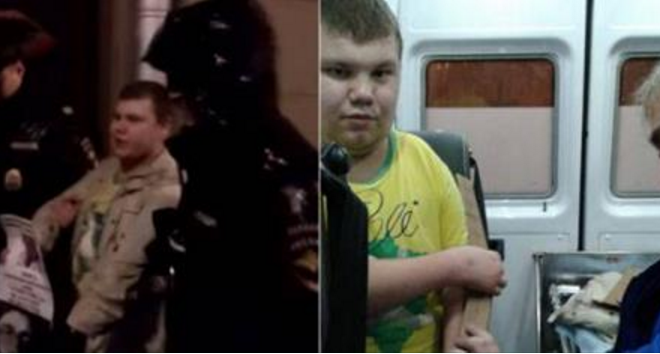 Viktor Kapitonov was violently detained on Friday, October 7, when he tried to hold a legal solitary picket in memory of Anna Politkovskaya, the journalist and human rights defender gunned down in Moscow exactly 10 years ago. The 20-year-old, who is disabled, was so badly injured that he is now in hospital with a broken arm, and may need an operation.   It is, however, the young man who is facing administrative charges, not the officers who treated him with such brutality.

Kapitonov was detained by police officers outside President Vladimir Putin’s administration building on Friday evening.  He had been standing quietly with a placard in memory of Anna Politkovskaya.  Even according to Russia’s increasingly repressive legislation, no permit is required for single-person pickets.  Yet he was approached by police officers who ignored his words about the picket being legal and began dragging him away.  As they illegally took him away, Viktor shouted that it was exactly 10 years since Anna Politkovskaya was slain, yet the zombified Russian people were concerned only with birthday greetings for Putin (who turned 54 on exactly the day that his most bitter critic was murdered).  The young man then continued that he wanted to say only that “Putin is Russia’s disgrace”, and that there could be no forgetting or forgiving Anna Politkovskaya’s murder.

It was at that point that the police became savage in their treatment of the young man although they would have been fully aware of his disability.  Viktor can be heard crying that they’ve broken his arm (see the video at the bottom).

There had been no breach of the law, yet the police took Kapitonov to the police station and drew up a protocol over administrative proceedings. He is due in court on October 18, charged under Article 20.2 § 8 of the Code of Administrative Offences over a supposed repeat infringement of the rules for holding a public event.  This carries a fine of up to 300 thousand roubles, 200 hours of community work or up to 30 days in jail.

Friends were only able to call an ambulance after he was released from the police station.

Viktor Kapitonov will almost certainly be found ‘guilty’ by a Russian court of a non-existent administrative offence and the police officers whose gratuitous detention and savagery are recorded, will face no penalties.

The court hearing will be the second in less than a month.  As reported here, he was fined 250 thousand roubles on Sept. 23 for publicly reading out Russia’s Constitution outside the State Duma.  He was detained, together with four other people, on Sept. 12 for reading aloud the document which is supposed to guarantee all Russian citizens the right to freedom of peaceful assembly.

In Kapitonov’s case, his reading of the Constitution was also treated as a ‘repeated infringement of the same rules for holding a public event’ under Article 20.2 of the Code of Administrative Offences.

Despite his disability, he has been treated very roughly by OMON riot police in the past with no justification (as the video footage here shows).

At one of the previous hearings, the judge claimed that she was being lenient because Kapitonov is disabled.  In fact, any of the fines are totally prohibitive for a person living on a disability pension.  The young man is also on principle opposed to paying unjust fines which would appear to recognize non-existent guilt.

According to the new Article 212.1 of the Russian Criminal Code, introduced in July 2014, criminal proceedings and a sentence of up to 5 years are envisaged if a court has issued three rulings on administrative offences with 180 days.

The kind of grounds and level of justification for such administrative proceedings are demonstrated by the treatment of Viktor Kapitonov. If they now choose to bring a criminal prosecution against this courageous young man, it will be, among other things, for reading Russia’s Constitution and joining people from all over the world in honouring Anna Politkovskaya.