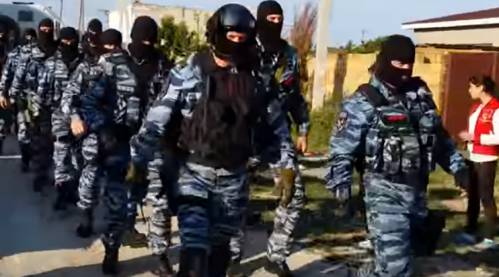 The abductions, disappearances, politically motivated trials seen in Crimea since Russia’s invasion have long been a bitter reality in the Russian Federation.  Some seem particularly cynical from a regime which seized control through the use of armed soldiers without insignia and lawless paramilitaries. There is only cynical lawlessness in the ‘terrorism’ charges brought against 19 Crimean Muslims for allegedly belonging to an organization which is legal in Ukraine.

When armed and masked men arrived and began carrying out searches in Bakhchysarai on May 12, members of the Crimean Tatar community understood only that a terrible injustice was yet again being perpetrated.  The men behind masks taking Remzi Memetov away were asked by one elderly woman what right they had.

They are, but it is for the moment under Russian occupation and that has brought immeasurable grief to many families.  Most of the arrested men have small children, and although Crimean Tatars and other Ukrainians have rallied around, how do you explain to young children why they can’t see their fathers?

Four men were taken into custody that day.  All of them are Crimean Tatars, all devout Muslims.  During one of the court hearings, Enver Mamutov commented bitterly that if they drank and traded vodka, they would have no problems.

Mamutov is 40 and has 7 children, 5 with his present wife Aliye Abselyamova.  His youngest daughter was just 2 months old when he was arrested.  He works in construction.

Armed men burst into his home on May 12, even breaking down the door, although nobody had shown any resistance.  They found nothing prohibited, no weapons, etc., yet Mamutov was taken away, and, together with the other three men has just had his detention extended till January 2017.

Remzi Memetov recently turned 50 in the Simferopol SIZO [remand prison].  He and his wife have two student sons.  He is a mechanical engineer by profession, but was unable to find work after returning to Crimea (together with other Crimean Tatars deported in 1944 and their children), and retrained as a chef.  He is apparently renowned for his skills throughout Bakhchysarai, and often helped take part in various Muslim festivals.

Zevri Abseitov is a dentist and has four children, the oldest only 11.  Rustem Abiltarov is a well-known tradesman who does finishes after building work.  He has three sons and a daughter.

The charges against them?  Mamutov is charged with ‘organizing’ a terrorist organization (Article 205.1 § 1 of the Russian criminal code), the others of taking part in it (Article 205.1 § 2).

There is in fact no proof that the men are members of Hizb ut-Tahrir, but, as mentioned, this organization is legal in Ukraine and in virtually all countries. The UK-based think tank Chatham House notes that Hizb ut-Tahrir “tends to avoid violent means and instead may focus on social work, education and dialogue initiatives”.

Whether or not we agree with their world vision, there is absolutely nothing to indicate that the organization as a whole or its members have been involved in any terrorism or violence.

Russia’s Supreme Court declared it ‘terrorist’ in 2003, together with over 10 other organizations.  It gave no proper explanation and concealed any information about the court ruling until well after the decision could have been appealed against.

Jailed for being Muslim

The FSB began open surveillance of Muslims soon after Russia’s invasion and annexation of the peninsula.  Veteran Crimean Tatar leader Mustafa Dzhemiliev reported that FSB officers would sit at the back of the mosque.  He suggested that they were judging whether a person was ‘an extremist’ by how devout they were, and how closely they followed religious teachings.

Armed searches of Crimean Tatar homes, mosques and even religious schools began in August 2014, with the pretext given for terrorizing entire families being that they were looking for ‘prohibited literature’.  There have also been major ‘anti-terrorist exercises’ with these clearly targeting Crimean Tatars.

Four Crimean Tatars from Sevastopol were arrested in January 2015. Human rights lawyer Emil Kurbedinov believes that Russia was ‘testing the water’ to see what the reaction would be.  There was unfortunately little from mainland Ukraine and none from beyond.  In February 2016, four men from Yalta -  prominent human rights activist, Emir-Huseyn Kuku, Vadim Siruk, Muslim Aliev, and Envir Bekirov - were arrested.   Two young men –Refat Alimov and Arsen Dzhepparov – were taken into custody in April.  While one reason may have been the hope that younger prisoners would be more susceptible to pressure, it is also known that attempts had been made by the FSB to recruit Dzhepparov as an informer.  He refused and may well be in prison as a result.

The armed searches and arrests of 5 Crimean Muslims on Oct 12 confirmed the fear that Russia is not about to stop the repression. This time 41-year-old Timur Abdullayev is charged with being ‘organizer’, Uzeir Abdullayev (42); Emil Dzhemadenov; Aider Saledinov and Rustem Ismailov (32) with involvement.  All men have been remanded in custody, a further 17 children, many very small suddenly bereft of totally law-abiding and peaceful fathers.

Despite the lack of any evidence at all, the outcome of the first trial of the Sevastopol men on September 7 this year was almost a victory.  The court rejected the charges against 31-year-old Ruslan Zeitullayev of ‘organizing’ a terrorist organization, and convicted him ‘only’ of taking part in it.  He was sentenced to 7 years, while Rustem Vaitov, Ferat Saifullayev andNuri Primov received 5-year sentences.

Even the court hearings on extending the men’s detention had been full of flagrant violations, with those coming to show the men support openly intimidated.  The trial was even worse and the entire case should have been thrown out.  This, however, does not happen, and the sentences which, in Zeitullayev’s case was 10 years less than that asked for by the prosecutor, were better than gloomily expected.

The prosecutor has appealed against the requalified charges and much will now hinge on whether the appeal is upheld.  It is likely that the investigators will try to do a better job at fabricating evidence and at least come up with ‘secret witnesses’ who can’t answer any questions without being prompted, and even then give confused replies.

They can still not make a convincing case out of totally unwarranted criminal prosecutions of Muslims for nothing more than their faith, and it is vital that these trials are seen and reported in all their repressive squalor.