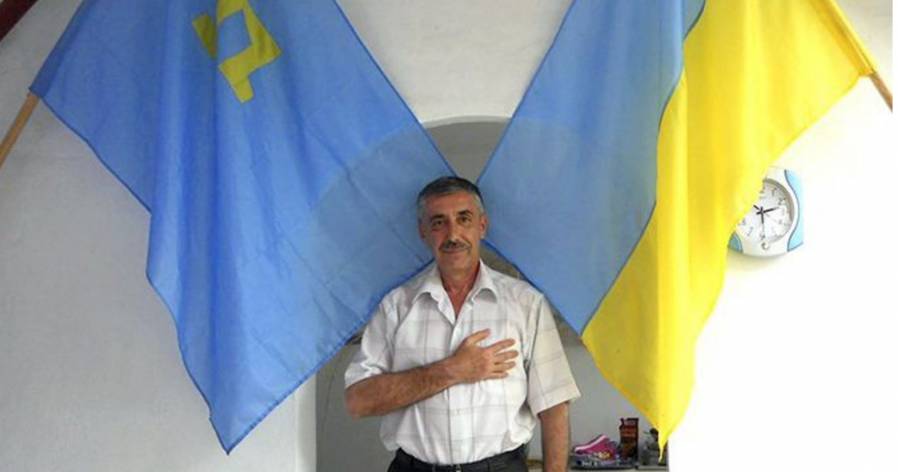 As feared, the FSB in Russian-occupied Crimea has initiated criminal proceedings against Suleyman Kadyrov, member of the Feodosia regional mejlis, or self-governing body.  He becomes the third Crimean currently charged with making ‘public calls to action aimed at violating Russia’s territorial integrity’  for saying, as does the entire international community, that Crimea is part of Ukraine.

Russia is literally accusing Crimeans of ‘separatism’ for opposing Russian occupation of their homeland, with the article of the criminal code – 280.1 carrying a possible 5-year term of imprisonment.  At present identical charges have been laid against 59-year-old Ilmi Umerov, Deputy Head of the Crimean Tatar Mejlis [the main representative assembly] and 56-year-old Mykola Semena.   Umerov’s alleged ‘separatism’ is viewed in his stating on TV that Russia should be forced to leave both Crimea and Donbas.  Semena is charged over an article with broadly the same message.  Article 280.1 of the Russian criminal code came into force on May 9, 2014, and it was feared from the outset that it would be used against those who criticize Russia’s invasion and annexation of Crimea.  This has, indeed, proved to be the case.  The first conviction (with a three-year sentence) was of Rafis Kashapov for posts condemning Russia’s invasion, and most prosecutions since have been for stating the undeniable truth, that Crimea remains a part of Ukraine (the position affirmed by the UN General Assembly on March 27, 2014).

Emil Kurbedinov, who is representing Kadyrov, reports that the FSB investigator has thus far refused to even provide a copy of the document initiating the charges.  He tried first to force Kadyrov to sign an undertaking not to reveal any details about the investigation. With a case like this, it is not surprising that the FSB wants to conceal it, nonetheless this is, Kurbedinov stresses, a breach of his right to defence.

The charges are over a Facebook post from March 29, in which Kadyrov gave a link to a TV ATR broadcast on money being collected for the Crimean Tatar ‘Asker Battalion’.  Kadyrov commented on the link, approving such donations and stating that Crimea is part of Ukraine.

Officers, many with machine guns, turned up early on Oct 5.  He was shown a search warrant – ‘on suspicion of extremism’, but not told that criminal proceedings had been initiated, another breach of the law.

As reported, Kadyrov immediately stated that he would not give any testimony or explanations, nor would he sign their search protocol, since his rights were being violated.  He asked to have his lawyer present, and witnesses he chose, but the officers insisted on using the ‘witnesses’ they brought.

They spent around 3 hours and took away his computer and telephone.

Kadyrov has never concealed his views, and in this sense the Facebook post is merely a pretext.  Born in exile, Kadyrov was only able to return to Crimea after Ukraine gained Independence in 1991.  As a graduate of the Soviet Police Academy, he took on a police job in Crimea.

If this is the case, and it seems likely, then well over two thousand regional mejlis officials could be at risk.

So, however, are any Crimeans unwilling to accept Russia’s occupation of Crimea.