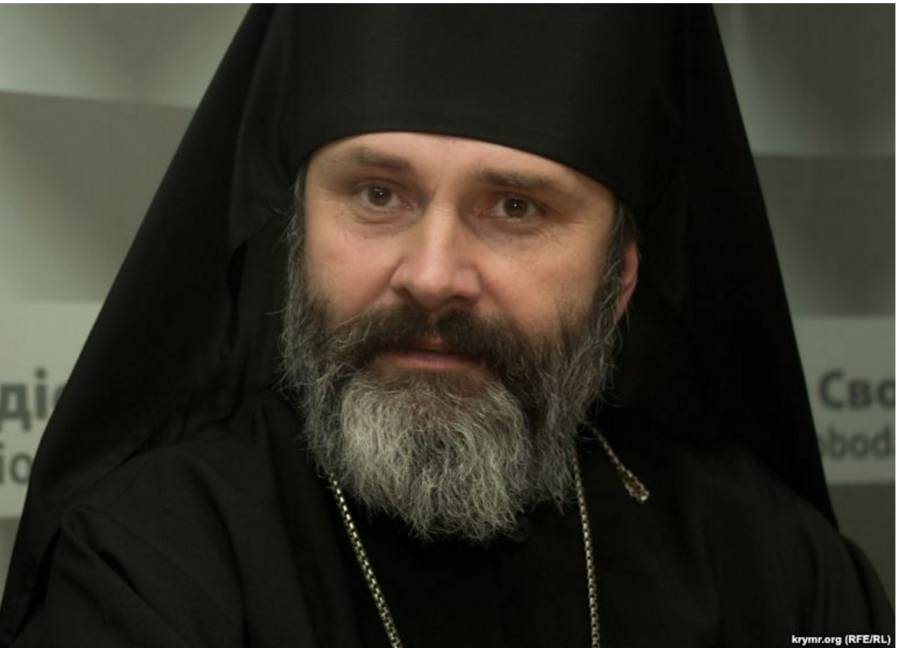 Archbishop Kliment, the Head of the Ukrainian Orthodox Church under the Kyiv Patriarchate in Crimea, was detained on Oct 19, on his return to Crimea under Russian occupation.  No explanation was given, and although he was released after an hour, this is the second such occasion and bears ominous similarities to the treatment by the Russian occupation regime of Crimean Tatar leaders Mustafa Dzhemiliev and Refat Chubarov before they were banned from their homeland.   Archbishop Kliment’s voice has been vital in protesting against the mounting repression and politically motivated arrests under Russian occupation and this latest incident comes just a week after he addressed an urgent plea to international bodies to “take decisive measures to protect fundamental rights of Ukrainians in Crimea”.

Beginning with the famous words from the Talmud: “Whoever saves one life, saves the entire world”, he explained that it was the appalling use of punitive psychiatry against Crimean Tatar leader Ilmi Umerov that had prompted his letter. He had just visited Umerov, he explained, who was being forcibly held in a psychiatric hospital for supposed ‘assessment’.  59-year-old Umerov is accused of ‘public calls to action aimed at violating Russia’s territorial integrity’ for stating, as do all democratic countries, that Crimea is Ukrainian, and his health issues made the treatment he received a direct danger to his life.

Kliment called on the two religious leaders “to do everything to secure the release of Umerov, Oleg Sentsov, Oleksandr Kolchenko & Oleksiy Chirniy; Oleksandr Kostenko; Akhtem Chiygoz and many other innocent Ukrainian citizens imprisoned for their convictions.”

Pressure on the Orthodox Church under the Kyiv Patriarchate and against the Archbishop began as soon as Russia annexed Crimea.  While seemingly wary of provoking international protest by openly banning the Church, Russia has done everything to drive its clergy and believers away.  The Archbishop reported back in January that the Church was in danger of being dissolved and destroyed because it does not recognize Russia’s annexation and is not prepared to re-register under Russian legislation. The situation with re-registration is critical for many religious communities.

Russian legislation is more restrictive than Ukrainian with respect to believers, imposing far more onerous demands on bodies wishing to function as a legal entity.  One of the requirements is that the religious organization adds words to its association papers that Crimea is part of Russia which many are not prepared to do.  The lack of such registration means that the communities lose the right to use and dispose of their churches, mosques, places of worship or other buildings, and face numerous other restrictions.

The battle to seize control of the Cathedral of Vladimir and Olga in Simferopol also began in 2014.  At that time, Kliment has since said, he was even offered 200 thousand dollars to give the Cathedral up.  In January 2016, the Crimean Arbitration Court under occupation issued a ruling ordering the Church to vacate the building within the next 10 days, and to pay half a million roubles, supposedly for communal services.  The appeal against that ruling was rejected in June this year.

In January 2016, Kliment said that the number of churches held by UOC KP had halved since annexation, and that of the 10 remaining churches, one in Yevpatoria had faced several arson attacks.  The seizure of the Church of the Intercession of the Holy Mother of God in the village of Perevalne came after a frightening armed attack on the church and believers.

There have also been threats on businesspeople supporting the Kyiv Patriarchate that they could lose their business if they continue to provide premises for places of worship.

It may be that the short detention on Oct 19 was ‘mere’ harassment because of the Archbishop’s appeal to the PACE and the strong resolutions which the latter produced.  Russia has, however, reverted to Soviet tactics by imprisoning those it can and exiling those whose arrest would cause too great a scandal.