Warning: A trip to Russian-occupied Crimea could get you jailed for 11 years 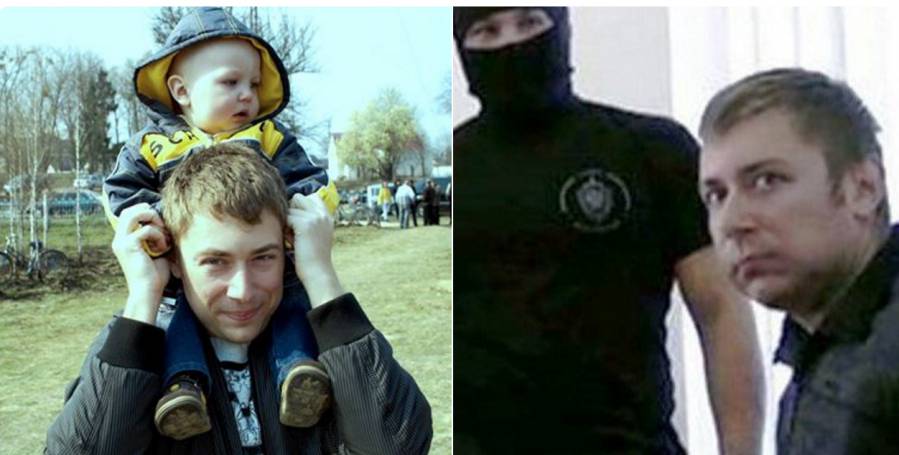 If the Russian FSB really had grounds for charging Valentin Vyhivsky with spying, why did they first abduct him and hold him incommunicado for 8 months, and why does he still bear the scars of the methods of ‘persuasion’ they used to get him to ‘confess’?

33-year-old Valentin Vyhivsky has not seen his small son for over 2 years.  He was seized at Simferopol railway station on 17 September 2014 and taken against his will to Russia.  There he was held incommunicado for several months, during which he was beaten and tortured, and twice subjected to mock executions.  Without any contact with his family, access to the consul and a proper lawyer, he provided the ‘confessions’ demanded of him, and was, in October 2015 sentenced to 11 years maximum security prison.

What Vyhivsky was even convicted of remains a secret.  His family have to this day not been provided with copies of any official documents.  Everything is classified, and the original trial for supposed spying was held in total secrecy.  The so-called ‘lawyer’ was a person appointed by the FSB, presumably to ensure that Vyhivsky confessed as required.

At the beginning Vyhivsky was charged under Article 183 of the criminal code, with illegally receiving and divulging commercial, tax or banking secrets.  The charges were absurd, but at least the sentence was only up to 2 years’ imprisonment.  This then changed to the much more serious charge of divulging information containing a state secret.

It is just possible  that Vyhivsky’s life-long fascination with aviation had attracted FSB attention, either directly or through some employee in the aviation industry in Russia who decided to report the young man’s interest in the subject.  Vyhivsky was not able to work in aviation, but did spend a lot of time reading about new developments and often discussing them with people on the Internet.

The FSB cooperated closely with Ukraine’s Security Service during the presidency of Viktor Yanukovych, yet there is no record at all of such FSB attention.  Nothing at all until Vyhivsky went off to Russian-occupied Crimea and disappeared.

His parents eventually asked somebody to make enquires for them and have learned that he and other people were rounded up by armed paramilitaries.  His parents believe that they may have seen that Vyhivsky is from Kyiv and found out that he took part in Euromaidan.  That has been enough to get Ukrainians arrested.

Certainly the secrecy about even Vyhivsky’s whereabouts for so many months makes it difficult to take any charges of state espionage seriously.  If the FSB really had grounds for such suspicions, they would have presented them immediately, not held a man totally incommunicado for 8 months.

The Ukrainian consul was only allowed to see him after 8 months, and then in the company of two guards who immediately stopped them if they tried to talk about anything but ‘neutral subjects’.  The same thing happened when his mother was able to visit him in Moscow.  He managed to tell her only that “they know how to persuade you”.  His mother and wife visited him only one more time and for no more than an hour while he was still held in Moscow.  Again, they were separated by glass and a guard stood next to Vyhivsky, controlling what he said.

Halyna Vyhivska has since been allowed one proper visit.  More details have now emerged, though there are some things that he has asked his parents not to divulge for safety reasons.  He is adamant that he never betrayed his country, and his mother has now seen the scars of some of the methods of ‘persuasion’.  Valentin has also said that two mock executions were carried out during trips to the forest where he was subjected to other forms of torture as well.

Since the original conviction, he has been officially represented by a proper lawyer, Ilya Novikov (one of the three lawyers who represented Nadiya Savchenko), however the appeal hearing at which Russia’s Supreme Court upheld the conviction on March 31, 2016 was still effectively top secret.  Novikov was even forced to sign an undertaking not to divulge any information.  It is likely that the information presented to the court included details about the torture used to ‘persuade’ Vyhivsky to confess.

Petro Vyhivsky reports that they recently received a letter, though they know that he has written around 10.  Asked about this in the presence of the consul and a rights activist, the prison administration claimed that Vyhivsky says negative things about Russia and writes the word without a capital.

He is being held in solitary confinement and wrote in the letter that it was cold and they were not issuing warm clothing.  It is not entirely clear why he is held alone.  The rights activists who are entitled to visit prisoners believe that it could be for his safety since there are prisoners in the prison who were involved in the fighting in Donbas.

The other reason, linked with this, is of course that the former fighters would be very likely to divulge all kinds of truthful information about the undeclared war that Russian is waging in Eastern Ukraine.

It is equally unclear why Vyhivsky is being held in an information vacuum, without radio, TV or even newspapers.

PLEASE write to Valentin Vyhivsky!  Even just a few words will tell him and Russia that he is not forgotten.

Please also ask politicians in your country to bring up Valentin’s case, and that of all Ukrainians held illegally in Russia.