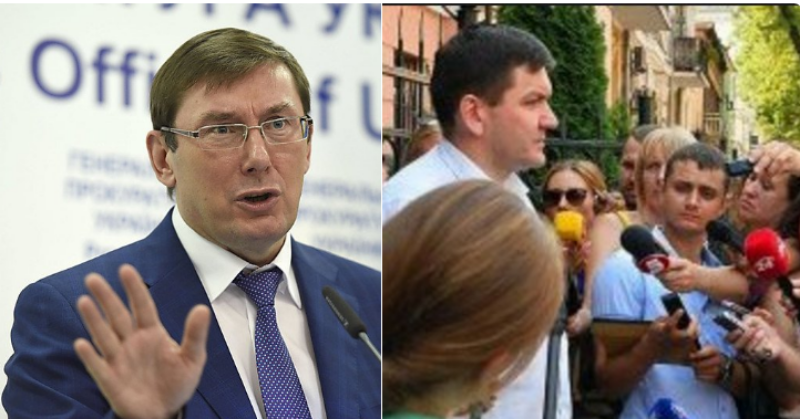 Lutsenko announced the reorganization of the Department of Special Investigations during a departmental meeting on Oct. 24.  Serhiy Horbatyuk will remain head of the same department, but will lose a considerable part of his responsibilities and staff.  A new department is to be created. with this having responsibility for investigating all alleged crimes committed by former President Viktor Yanukovych and his associates.  That, the Prosecutor General’s Press Secretary has said, includes investigating usurpation of power, embezzlement, plundering, etc. of state property and episodes connected with economic crimes.

The choice of head of this new department is, at very least, startling.  Yury Stolyarchuk was long considered to be a close ally of the former Prosecutor General Viktor Shokin, and to be involved in the blocking of reform of the prosecutor’s office.  He has also been publicly accused by Horbatyuk of major obstruction and pressure on the investigation into crimes against Euromaidan activists.

Worth noting that many civic activists and the lawyers representing Maidan victims were concerned earlier in the year that Stolyarchuk could be appointed to replace Shokin.  They believed that this would signify a lack of any will to reform, and called for civic involvement in choice of new Prosecutor General.  It is no accident that the Advocates Advisory Council who represent the families of Nebesna Sotnya, those killed during Euromaidan, and other civic activists all proposed Serhiy Horbatyuk as their choice of candidate.  They particularly pointed to the fact that any progress made in investigating crimes against Maidan activists had been thanks to Horbatyuk and the Special Investigations Department which he had headed since its formation in late 2014.

On Oct 4, Lutsenko issued a formal reprimand to Horbatyuk regarding the speed, etc. of the investigations thus far.  Lutsenko criticized, for example, the lack of indictment against high-ranking officials.  Horbatyuk says that he tried to appeal against the reprimand but received no response.  That leads him to assume a collective position with what he considers an unwarranted disciplinary measure being the first step towards dismissal.  He believes that the conflict is in fact over his refusal to carry out unlawful instructions.

Horbatyuk’s Department has been praised by lawyers representing Maidan victims for their systematic approach to the investigations.  The Advocates Advisory Council has also been extremely critical of the pressure brought to bear by the Prosecutor General’s Office and high-ranking politicians to bring charges before all evidence has been gathered, with this meaning a high risk that the cases will collapse later and not result in probably warranted convictions.

They, like Horbatyuk, believe that the changes announced by Lutsenko on Oct 24 can only impede progress on investigating high-profile crimes.

The Advocates Advisory Council has announced a press conference on Tuesday morning at which Maidan victims and their lawyers will talk about what they consider to be the real consequences and likely motives of Lutsenko’s move. They are convinced that this is a move backwards and will effectively result in Yanukovych, his Prosecutor General Viktor Pshonka, Interior Minister Vitaly Zakharchenko and others directly involved in the crimes against Maidan not being held to answer.  The move will also mean that victims will be distanced from the investigation process.  This must inevitably reduce the degree of public monitoring of the investigations, which had significantly improved over the last two years.

The aims cited on the Prosecutor General’s website sound laudable.  Questions must, however, be asked when an investigative body widely trusted by Maidan lawyers and civic groups is facing effective dissolution.  Belief in the admirable objectives is also not increased when the new body is to be headed by a person who has on numerous occasions been accused, seemingly with justification, of blocking reform.

Back in May, Yury Lutsenko held an initial meeting with Maidan lawyers at which he announced moves that seemed aimed at removing sources of sabotage within the Prosecutor General’s Office.  The cautious optimism then expressed has now vanished, and Lutsenko would be well-advised to reconsider this move.