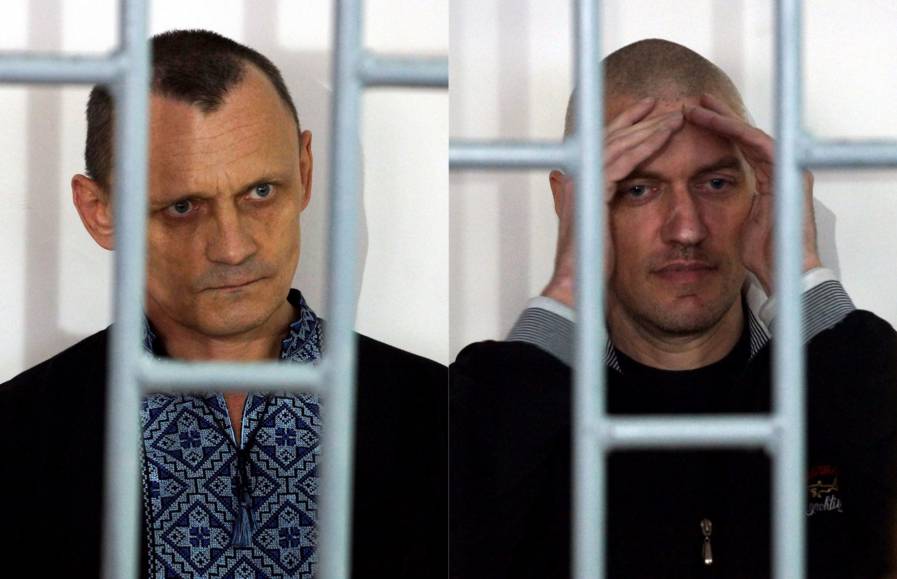 In modern Russia, like in Stalin’s time, ‘confessions’ can override anything, including unbreakable alibis and undeniable historical fact.  Russia’s Supreme Court on Oct 26 ignored proof that Mykola Karpyuk and Stanislav Klykh had been in Ukraine, not Chechnya in 1994, when they are supposed to have fought .  It paid no heed to indisputable evidence that the investigators’ story was all wrong, including on how the soldiers the Ukrainians are supposed to have killed died, and where.

Former political prisoner Nadiya Savchenko’s arrival in Moscow for the hearing rather stole the headlines, though it probably is true that nothing about the men’s ‘trials’ constituted breaking news.  Certainly the Supreme Court’s rejection of the two men’s appeals against  22.5 and 20-year sentences passed on Karpyuk and Klykh, respectively, was expected, though frustratingly lawless nonetheless.

The two men were on a video link from Grozny, Chechnya where they have been held since the beginning of the trial.

Karpyuk was dismissive of the ‘anecdotal’ trial.  He noted that both the indictment and the sentence say that he fought in Chechnya in 1995, and then in 2000 came to Chechnya to undergo military training.  He added that in the prison they joke about this, asking him how it is that he first came to fight and then later, to learn how to fight.  That is your supposedly “impartial and objective court”, he added.

“All of this lawlessness is aimed at one thing only – to revenge me for being a Ukrainian, and a patriot of my country.”

Klykh’s words were less clear.  What has been evident since soon after the so-called ‘trial’ began in October 2015 is that the 43-year-old historian’s psychological state has been gravely damaged, almost certainly by the torture and psychotropic drugs received during the 10 months that he was held totally incommunicado.

Neither man was present at the original ‘trial’.  Karpyuk was removed almost immediately for supposed contempt of court.  Klykh began showing signs of being seriously disturbed and was also removed.  The psychiatric assessment which the defence asked for proved totally superficial and found that Klykh was mentally fit.  This was then used for a particularly cynical extra court case, with Klykh now accused of ‘insulting’ a prosecutor.

Everything about this trial of two Ukrainians demonstrates cynicism..

The very fact that Russia, which is sending military forces and huge numbers of mercenaries to Donbas to fight and kill Ukrainian soldiers, should be trying any Ukrainian for alleged involvement in fighting against federal Russian forces (on the side of Chechen independence fighters) is breathtakingly cynical.  Russia has, for example, treated Arseny Pavlov, the Russian warlord and mercenary, killed in Donbas in October as a ‘hero’.  Pavlov, better known as ‘Motorola’, was wanted by Ukraine for a significant number of well-documented war crimes.

Motorola’s role in Donbas was undisputed.  Karpyuk and Klykh had never set foot in Chechnya, and could prove that they were in Ukraine during the period when they were alleged to have fought against Russian forces in Chechnya and killed 31 soldiers.

Both men have been declared political prisoners by the Memorial Human Rights Centre which has also demolished the entire indictment as full of howling factual errors about the events in 1994/95.  Prominent Russian human rights defender Zoya Svetova has called the case “one of the most insane and monstrously falsified prosecutions initiated against Ukrainian nationals since the annexation of Crimea”.

It should be said that there is a lot of competition for most insane, but Svetova is probably right.

Mykola Karpyuk was effectively abducted in March 2014 and held incommunicado for 18 months until just before the trial.  Stanislav Klykh was seized from a hotel in Oryol in August 2014, and held for 10 months without any contact with his family or the consul.  Neither man had proper lawyers, and both renounced all lurid and horrific ‘confessions’ to heinous crimes as soon as they were given access to lawyers.  Both gave credible accounts, backed in Klykh’s case by medical records, of the torture they were subjected to over very long periods of time.

Both men’s applications are now with the European Court of Human Rights and there seems no reason to doubt that they will win their cases.

Russia claimed that 43-year-old Klykh and Karpyuk (53) took part in fighting in Chechnya 20 years ago and that during battles in Dec 1994 and Jan 1995 they killed a number of Russian soldiers.   Karpyuk was accused of creating and leading a band of fighters called ‘Viking’ which Klykh was supposed to have been part of.

In its analysis, Memorial HRC demonstrated that the indictment contained fictitious crimes, a huge number of factual mistakes and was almost totally based on testimony which the men had retracted.  Some of the lurid confessions were to heinous crimes which had simply never happened. Memorial also pointed out that the prosecution had deliberately left in such horrific ‘confessions’ in order to be able to read them out in court.  Since there were no charges, the defence could not challenge them and prove that they had never happened.

There was no historical evidence to back the tales of torture and extrajudicial executions presented by the prosecution, and plenty of evidence to confirm the men’s alibis.  They weren’t there, and are therefore innocent.

The addresses at present:  Mykola Karpyuk (in Russian Nikolai)