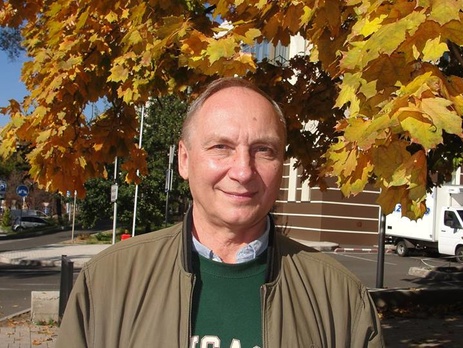 62-year-old Ihor Kozlovskyy, a renowned religious specialist active in interfaith dialogue, has been held prisoner by militants from the so-called ‘Donetsk people’s republic’ [DNR] since late January this year.  There were hopes that the militants would release him as part of a recent exchange, but this did not happen.

Kozlovskyy, President of the Centre for Religious Studies and International Spiritual Relations, is well-known in Donetsk.  He had remained in the city to care for his son who has Down Syndrome and is confined to a wheelchair.  Militants burst into his flat on Jan 27, 2016, and took Kozlovsky away without giving any explanation.  They left his son without any care, and relatives were only allowed access to him the following day.  The militants also removed computer equipment, documents and a collection of antiques.

Kozlovsky was seized two days before a demonstration organized by the militants outside a Greek-Catholic Church in Donetsk.  The participants, reportedly public sector workers who’d been forced to attend, called on militant leader Alexander Zakharchenko “to drive out sectarians”, who were alleged to be Western-paid or even linked with the CIA.

Any belief that this was mere coincidence was dispelled by an interview given in February by Alexander Khodakovsky, who then still held a prominent position in ‘DNR’.  He asserted that the highly respected academic may have been involved in what he termed “destabilizing the situation” and had “multiple contacts with various organizations in Ukraine engaged in destructive activities here”.

The militants have, from the outset, pushed only one religious teaching – the Orthodox Church under the Moscow Patriarchate – and have persecuted others.  Khodakovsky clearly saw any form of dialogue between Ukrainian Christians, Jews and Muslims as being aimed at fermenting ‘radicalism’ among Muslims in Donbas, and hurled vague claims that ’preachers from Syria’ had already worked on young people in Chechnya, in Dagestan, and could now try this in Donbas.

Presumably some of the militants have understood that attempts to link the 60-year-old with radical Islamist fighters lacked any credibility, but other excuses have not been much better.  Ukrainian MP Iryna Herashchenko, who is involved in negotiating the release of hostages, recently published a list of people whom the militants claim are ‘spies’, with this including Kozlovsky.  On the other hand, Yury Tandit, head of the SBU unit working on the release of hostages, says that they have also charged the 60-year-old university lecturer with ‘possession of weapons’.

They have at least, Tandit says, confirmed where Kozlovsky is being held and he is on the list of 47 hostages whom the militants are admitting to.  Since Ukraine has a list of 109 prisoners, there is still a very long way to go to secure the release of all soldiers and civilians held hostage.

There are also hostages against whom the militants have brought ’charges’ with some even purportedly sentenced to long periods of imprisonment.

Others seized by the militants in January, for example, included Volodymyr Fomichov, a 23-year-old civic activist who had returned to his native Makiyivka to spend New Year with his parents.   He is believed to have been badly tortured, and was reported in August of this year to have been ‘tried’ by the militants and ‘sentenced’ to two years’ imprisonment for supposedly carrying two grenades into the militant-controlled territory.  See: Ukrainian civic activist tortured & ‘sentenced’ by Donbas Kremlin-backed militants

Such ‘charges’ have been tried in other cases, including that of Yevhen Chudnetsov, a Ukrainian volunteer fighter from Makiyivka who was captured in February 2015 and tortured into ‘confessing’ for Russian television.  In May this year he was ‘convicted’ of “an attempt to violently seize power on the republic’s territory” and ‘sentenced’ to 30 years’ imprisonment.