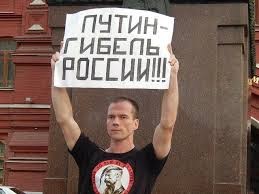 Ildar Dadin in Moscow holding a sign saying ‘Putin is the death of Russia!’

"Nastya! If you decide to publish information about what’s happening to me, try to distribute it as widely as possible. This will increase the chances that I’ll stay alive. You know that in the IK-7 colony there’s a whole mafia operating in which the entire administration of the institution participates: the head of the colony major in the internal services Sergei Leonidovich Kossiev and an absolute majority of the employees of the colony, including the doctors.

From the moment of my arrival at the colony on September 10, 2016 they immediately took virtually all my things away and planted two blades, then “found” them in a search. This is a universal practice used to ensure that a new arrival goes into the punishment cell, so that he understand straight away what hell he’s got into. They sent me to the punishment cell without any ruling, but took all my things away, including soap, my toothbrush, toothpaste and even toilet paper. I announced a hunger strike in response to these illegal actions.

On September 11, 2016 the head of the colony Kossiev came to me with three employees. Together they started beating me. I was beaten four times in total on that day, by 10-12 people simultaneously, they kicked me. After the third beating they forced my head into the toilet bowl right there in the punishment cell.

Hung up by his wrists

On September 12, 2016 guards came, handcuffed my hands behind my back and hung me up by the handcuffs. This kind of hanging causes terrible pain in the wrists, and your elbow joints twist and you feel a horrible pain in your back. I hung like that for half an hour. Then they took off my underwear and said they were going to bring in another prisoner who would rape me if I didn’t agree to stop my hunger strike. After that they brought me to Kossiev’s office, where in the presence of other employees he said: “They haven’t beaten you much yet. If I give the order to the guards, you’ll be beaten a lot harder. Try to complain and they’ll kill you and bury you behind the fence.” Then they beat me regularly, several times a day. Constant beatings, humiliation, ridicule, insults, unbearable living conditions – all that happens to the other prisoners too.

All the subsequent times I was disciplined and sent to the punishment cell were fabricated and based on an open lie. All the video recordings in which I was disciplined were faked: before filming them they told me how to act and what to do – don’t argue, don’t object, look at the floor. Otherwise they said they’d kill me and no one would find out about it, because no one even knows where I am. I can’t get letters past the administration, and the administration has promised to kill me if I write a complaint. Nastya, in my first letter from IK-7 I wrote to you about the ECHR, to avoid censorship and give at least a tiny hint that I wasn’t completely OK and needed help (I didn’t get a single letter from Ildar from the colony – Anastasia).

Death will not be accident or suicide

I’m asking you to publish this letter because there’s a genuine information blockade in this colony, and I can’t see any other way to get through it. I’m not asking you to get me out of here or move me to another colony: I’ve seen and heard how they beat other prisoners, so my conscience doesn’t allow me to escape from here – I plan to fight to help the others. I’m not afraid of death, but I’m most afraid of not being able to withstand the torture and giving in.

If the Committee Against Torture hasn’t been destroyed yet in Russia, I ask them for help in ensuring the right to life and safety for me and the other prisoners. I ask for it to be made public that Major Kossiev directly threatens murder for attempts to complain about what’s going on. I will be glad if you find a lawyer who can be at Segezha permanently and provide legal support.

Time is working against me. Video recordings from the observation cameras would prove the torture and the beatings, but there is less and less chance that they’ve been kept. If they subject me to torture, beating and rape again, I probably won’t last more than a week. In the case of my sudden death they might tell you that the reason was suicide, an accident, shot trying to escape or a fight with other prisoners, but that will be a lie, it will be a planned administrative murder with the aim of removing a witness and victim of torture.

I love you and hope to see you sometime. Your Ildar. "

Translated by Sarah Hurst, http://xsovietunion.blogspot.com/?view=magazine from the original published at: https://meduza.io/feature/2016/11/01/izbivali-po-10-12-chelovek-odnovremenno-nogami