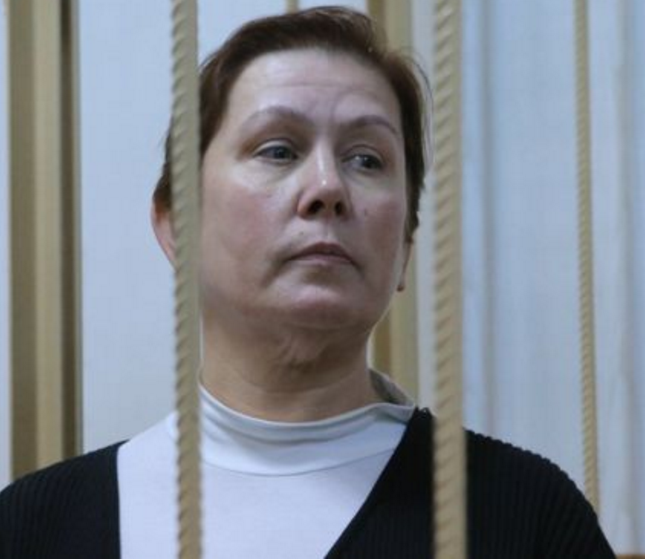 The trial has begun in Moscow of Natalya Sharina, Director of the Ukrainian Literature Library in Moscow.  She is charged with ‘incitement to enmity’ over supposed ‘extremist’ material allegedly found in the library and could face a 5-year prison sentence.  It was on extremist charges that she was arrested a year ago and has been under strict house arrest ever since, however many months later the investigators came up with further charges, this time of ‘squandering on a large scale’.

Sharina pleaded not guilty to the ‘squandering’ charges and stated that she did not understand what exactly she is accused of with respect to the ‘extremism’ allegations.

Sharina’s lawyer, Ivan Pavlov, has long pointed to the fundamental flaws in the indictment.  It is quite unclear what the 59-year-old librarian is accused of.  It is not just that the prosecution has not proven any intent to incitement.  There is no attempt to even define the intent, Pavlov says, adding that Sharina’s motives for this alleged ‘offence’ are also a mystery.  There is, in short, no evidence of a crime.

The case had earlier been returned to the prosecutor several times, without this in any way clarifying the situation.  Unfortunately, this time it appears that judge Yelena Gudoshnikova from the Meshchansky District Court in Moscow has decided that the surreal lack of substance to the charges did not prevent Sharina being tried.

The following day Russia’s Investigative Committee reported that the then 58-year-old librarian was accused of ‘inciting national enmity or hatred, as well as of denigrating human dignity of a group of people on the grounds of nationality [i.e. Russians]” (Article 282 § 2b of the Russian Criminal Code).  The Investigative Committee asserted that from 2011-2015, Sharina, in her capacity as Director of the Library, had “circulated among visitors books by Dmytro Korchynsky designated by the court as extremist material and prohibited for use”.  Printed matter was also allegedly removed which was claimed to contain “calls to anti-Russian state and anti-Russian propaganda”.

Both Sharina and her colleagues believe that the book by Korchynsky which was 'found' must have been brought with the officers.  They say that it had been removed during a search of the library in 2010 and had not been returned.

The renowned Memorial Human Rights Centre declared Sharina a political prisoner two weeks later, on Nov. 16.  Memorial noted that Korchynsky had himself addressed pro-Kremlin youth camps in the Moscow region during the 2000s.  Korchynsky and his ‘Bratstvo’ organization have earned notoriety in Ukraine as provocateurs, and are suspected, with cause, of having been used to provoke police backlash in the recent past.

The human rights activists linked the criminal proceedings against Sharina with “the anti-Ukrainian campaign continuing since Spring 2014 in the state-run media and in utterances made by public officials holding high posts in the Russian Federation’s leadership”.  They condemned criminal prosecution of the director of a library over material (allegedly) held in the library and deemed extremist as new repressive practice.

In June this year a ‘psycholinguistic’ assessment was produced of the other material taken away.  Yevgeny Tarasov was commissioned to examine 24 publications from the library and found ‘extremism’ in 22 of them, including the children’s journal ‘Barvinok’.

As reported, in April 2016, the investigators came up with the ‘squandering’ charges under Article 160 (§ 3 & 4).   Sharina is accused of having paid the lawyer representing her over previous charges attempted in 2010, but finally dropped from state funds, as well as of the fictitious employment of two legal consultants. .

Sharina’s prosecution has also been condemned by the Sova Centre in Moscow which, among other things, monitors abuse of anti-extremism legislation.  Maria Kravchenko explained to Radio Svoboda that prosecution of a librarian for ‘incitement’ is impossible for several reasons.  In fact, the law on libraries obliges librarians to hold all material which reaches the library.  This clearly clashes with Russia’s legislation and its huge list of ‘prohibited material’.  There needs to be a deliberate act of propaganda to talk of incitement, etc.  Here there was simply a library whose job it is to hold and issue books, and who is not obliged to have familiarized him or herself with their content.

Natalya Sharina, a Russian national who does not even know Ukrainian, was taken on after a previous offensive against the Ukrainian Literature Library, as somebody who was seen to be more politically ‘reliable’.  She has now become one of Russia’s many targets in its ongoing offensive against Ukraine.