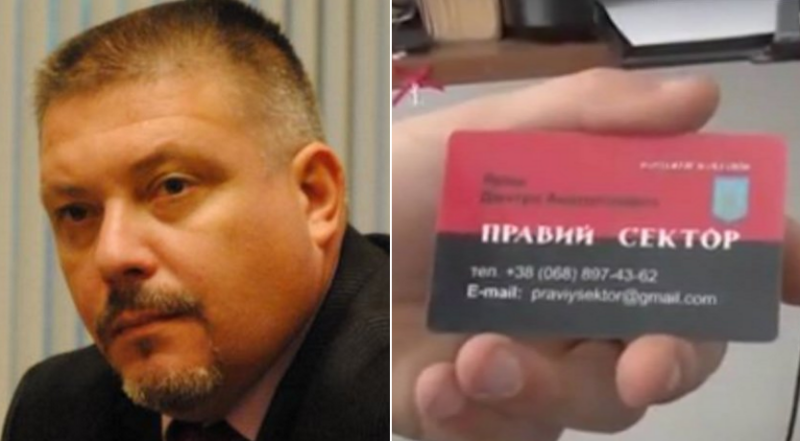 Scroll to the bottom for updated information

Russia’s Security Service [FSB] has announced the arrest of three more Ukrainians alleged to have been planning acts of ‘sabotage’ in Russian-occupied Crimea. At least two of the men are well-known analysts, and scarcely fit the roles assigned them.  Nor however does the ‘Right Sector’ business card which first provoked a flurry of Internet memes more than 2 years ago, yet was presented on Russian television as ‘evidence’.

The FSB statement did not give names, and simply informed that “members of a sabotage – terrorist group of the Ukrainian Defence Ministry’s Central Intelligence Department” had been detained in Sevastopol on Nov 9.  The FSB claims that they were planning acts of sabotage on military and other infrastructure, and states that powerful explosive devices, weapons and ammunition were found, together with special communications devices, maps of the supposed sabotage targets and “other material evidence of their criminal activities”.

Other details, including the men’s names and the fact that all had been remanded in custody for 2 months, came from the Russian media.  An apparent FSB operational video was clearly circulated to the Russian media, with this showing Dmytro Shtyblikov walking along the street and being very roughly pinned down and handcuffed by FSB officers.  They took him back in handcuffs to his flat.  The video focuses on, for example, the Ukrainian trident, a Ukrainian flag on the wall, and Dmytro Yarosh’s ‘Right Sector’ business card.  The card is described on Russian television as being from the nationalist movement banned in Russia.  The Russian channels understandably omitted other important information.  The card was first ‘found’ intact and looking remarkably untouched in a totally gutted out car at a checkpoint near Kremlin-backed militant-controlled Sloviansk in April 2014.  Russian propaganda used the business card as ‘proof’ that Right Sector was behind the shootout, with this leading to a twitter meme storm, with Yarosh’s business card ‘found’ in all kinds of wildly improbable places. It’s value as ‘incriminating evidence’ is therefore strictly limited.  So too is the rest of the video which appears to show weapons and ammunition found in Shtyblikov’s home, as well as explosives in a well.  The weapons may in fact be airguns, but most importantly, there is nothing to indicate that a lawyer or even independent witnesses was present during the search, and therefore nothing at all to prove that they were found there.

For the moment, virtually all information is from the Russian media, including the assertion that the three men – Shtyblikov, Oleksiy Bessarabov and Volodymyr Dudka -  have all ‘confessed’.

Radio Svoboda’s Crimean Service has compiled some information about Dmytro Shtyblikov.  His brother Oleksiy confirmed the arrest, and said that initially his wife had also been detained, but that she had later been released.   Dmytro managed to call him from the prosecutor’s office and tell him that he was charged under Article 281 § 2 (sabotage, carrying a sentence of 12 – 20 years).

The allegations are rejected both by Shtyblikov’s brother and by Ukraine’s Defence Ministry which called the arrests the “latest fake” by Russia aimed at concealing its repression of Crimeans and trying to discredit Ukraine.

Until the Spring of 2014, Shtyblikov was Director of International Programs at the Nomos think tank in Sevastopol.  Radio Svoboda points out that they were among the media, etc. to whom he gave analytical commentaries on military issues.

He once trained in military intelligence but had not served in the army for 10 years.  Friends advised him to leave Crimea after Russia’s annexation, but he said he couldn’t since his family were living there.

Mikhailo Honchar, former head of Nomos, confirmed that Oleksiy Bessarabov was also an analyst for Nomos.  He notes that both men were public figures, and scarcely the kind of people you would use for secret sabotage or spying.

Plausibility has not worried the FSB on earlier occasions.

In May 2014, four opponents of Russia’s invasion and annexation of Crimea, including renowned Ukrainian filmmaker Oleg Sentsov and civic activist Oleksandr Kolchenko were arrested.  They were accused of a ‘Right Sector terrorist plot’.  There was no evidence at all, only the ‘confessions’ of Oleksiy Chirniy and Gennady Afanasyev.  The latter found the courage to defy the FSB and state, at the trial of Sentsov and Kolchenko that all testimony had been given under torture.

The Russian courts ignored detailed allegations of torture, the absence of any evidence, even the sheer absurdity of charging Kolchenko, a left-wing anarchist with involvement in a right-wing plot.  Sentsov was sentenced to 20 years’ maximum security imprisonment, Kolchenko to 10.

Three Ukrainians are still in custody after being arrested at the beginning of August, also on ‘sabotage’ charges.  Virtually nothing is known about Ridvan Suleimanov, more about Yevhen Panov and Andriy Zakhtei.  All were shown separately on Russian television ‘confessing’ to a sabotage plot for Ukrainian military intelligence.  When finally allowed to see a lawyer two months later, Panov confirmed that he had been tortured, and had read out what they told him to say.  Panov and Zakhtei were immediately moved to Moscow after that one meeting with a lawyer, and Russia is now preventing at least Panov from seeing either a lawyer or the Ukrainian consul.

Lawyer Alexander Popkov reports that they have been trying to find Dmytro Shtyblikov since his reported arrest.  He is supposedly not in any of the Crimean detention centres, and it seems clear that the FSB are simply trying to prevent a proper lawyer from seeing the detained man.  Popkov stresses that the FSB have been informed that a lawyer has been appointed, which places in question the legitimacy of any further ‘investigative activities’ without the lawyer’s presence   Popkov, however, also reports that the FSB has also summoned Shtyblikov’s brother Oleksiy for questioning.

Crimea SOS has managed to speak with the family of Volodymyr Dudka who is understood to have been a captain in Ukraine’s military marine force until his retirement in 2007.  The scant information available suggests that he may, in fact, have cooperated with the Russian occupation authorities after Russia’s invasion in early 2014.