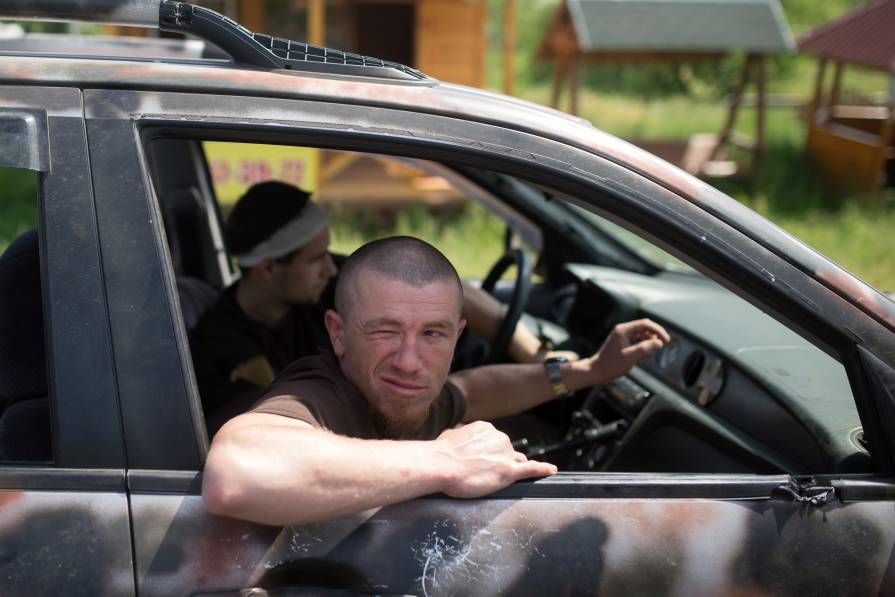 Kremlin-backed militants claim that they have arrested 6 people responsible for the explosion that killed Arseny Pavlov [‘Motorola’], the Russian mercenary wanted by Ukraine for war crimes in Donbas.   While both Britain and Estonia have accepted that mercenaries fighting on the side of the Donbas militants should be tried for terrorism, the militants and Russia have treated Motorola as a slain hero. In fact, however, the questions raised by these supposed arrests only strengthen the suspicion expressed from the outset that Motorola might have become one of the ever-increasing number of militant leaders killed on orders from the militants or even Moscow.

The bomb which killed Motorola and his guard on Oct 16 was placed in the lift of his apartment block.  The Russian mercenary was known to be extremely security conscious and the building would have been heavily guarded.  This did not stop Alexander Zakharchenko, leader of the so-called ‘Donetsk people’s republic’ [DNR] from immediately claiming this to have been a “terrorist act carried out by a Ukrainian sabotage group” and threatening Ukraine with a ‘proportional response”.

On Oct 17, a video was posted on YouTube with four men in balaclavas and holding weapons standing in front of the Ukrainian flag, as well as a banner of the far-right movement Misanthropic Division.  They claimed that they were responsible for Motorola’s death, that they were in Donetsk and told Zakharchenko that he would be next.  The video, which was later removed, ended with the men making a Nazi salute.

A spokesperson for Misanthropic Division who called himself ‘Berlin’ has told Hromadske Radio that his organization had nothing to do with the killing, or the tape, and that they have no activists in Donetsk.  He believes that the whole story about the ‘detentions’ is probably provocation.

He says that they tracked down one person who they believe was on the tape, and that their discovery coincided with Ukraine’s SBU [Security Service] finding him.  He claims that the person was from the Chernihiv Battalion, but was not willing or able to provide any further information, and there is no way of checking it.

The organization is not officially recognized in Ukraine, and with cause, given its neo-Nazi, anti-migrant views.  The militants’ attempts, therefore, to claim that the 6 supposed Misanthropic Division activists were working for the SBU are less than convincing.

On Nov 10, Zakharchenko named two SBU officers, claiming them to be behind the so-called sabotage group who killed Motorola, and asserting that they had a ‘full list’ of culprits.

The SBU stated that they saw no need to react to such idiotic claims.  The militants then announced on Nov 12 that 6 activists of the organization whose leaders had admitted the killing had been ‘arrested’ and that they had supposedly carried out tasks for the SBU.

The reports are probably for local propaganda and the Russian media.  Unfortunately, however, while involvement in Motorola’s killing may be unlikely, there doubtless are six people being held and having the required ‘confessions’ tortured out of them.

Motorola was, as mentioned, treated like a war hero by the militants who staged a huge funeral and by Russian politicians and Kremlin-loyal media.  There was even a proposal by Russian State Duma deputy Vitaly Milonov to name a street in St Petersburg after him.

There are multiple reasons for dismissing this image of Arseny Pavlov.  The 33-year-old was born in Komi, and had fought in Chechnya earlier.  In Donbas, he led the notorious Sparta armed formation, and had himself boasted to a Kyiv Post journalist of killing 15 prisoners of war.

Pavlov (who became known as Motorola while in Chechnya) took part in the battle at Ilovaisk, when Russian forces were brought in to help the militants defeat Ukrainian forces.  He was later involved in the struggle for control of Donetsk Airport, and it is from that period that most of the evidence of war crimes comes.

This was doubtless a ‘coup’ for the militants and they even posted a videowhich shows the men alive and without any signs of beating.  Branovytsky could be easily identified as he was wearing a blue jacket, while the other prisoners are all in camouflage.