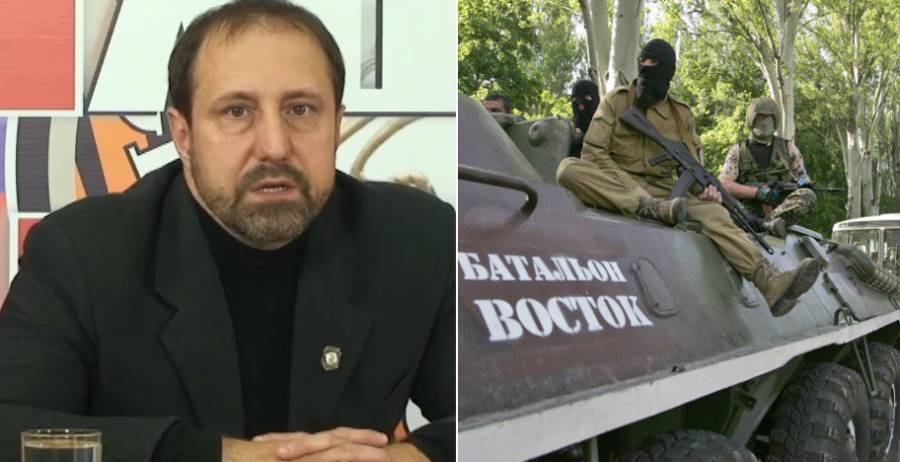 According to a prominent militant from the so-called ‘Donetsk people’s republic’ [DNR], Ukraine’s compliance with the Minsk Agreement is “not in their interests”.  Alexander Khodakovsky has openly admitted that they hope “in their heart of hearts” that the steps set out in Minsk do not work.

Khodakovsky is the former commander of the Vostok Battalion and has, at various times, seemed like the main rival to DNR leader Alexander Zakharchenko in a power struggle.  His position now is less clear, but he is reported to often visit Russia, and he does not seem afraid to openly acknowledge the militants’ financial dependence on Moscow.  In an interview to Reuters in early October, he acknowledged that Russia is paying pensions and public sector salaries in the so-called ‘republics’.

Khodakovsky is now the leader of an organization called ‘Patriotic Forces of Donbas’, and it was in this capacity that he spoke on Nov 15 in a Donbas-Moscow ‘dialogue’ with Alexei Belyaev-Gintovt and another member of the Eurasian Youth Union which is linked with Russian fascist ideologue Alexander Dugin.

There is an ironic twist here in view of the overt support that Dugin, and Kremlin-funded Russian media gave to Donald Trump during the US presidential elections and Russian politicians’ glee at his victory.  Khodakovsky is perturbed that Ukraine may be prompted by a weakening of support from the USA under Trump to make more concessions on the political requirements of the Minsk Agreement.  At present Ukraine is insisting that security issues, including control of the border by OSCE observers, must take precedence.

Any such implementation of the Minsk agreement, Khodakovsky makes clear, is not in their interests since this will distance them from Russia, and force control over the border between that militant-controlled Donbas and Russia.  It is through the uncontrolled parts of the border that huge amounts of Russian military equipment, military personnel and goods constantly cross into the militant-held areas of the Donetsk and Luhansk oblasts.  The US Mission to the OSCE has reported that OSCE monitors are able to view no more than one tenth of all border crossings, and are denied access from the Russian side of the border.  Even so, the “Observer Mission has observed more than 30,000 individuals in military-style dress crossing just at the two checkpoints to which it has access.”

Hardly surprising that the militants are alarmed at anything that could force them to agree to border controls.

“Ukraine could suddenly up and make certain concessions.  It will begin making amendments to laws, to the Constitution regarding ‘special status’ for the territory [in Donbas].  This is definitely not in our interests since we’ll have to make the following step.  Elections, that’s nothing, just for show.  Everybody knows that we totally control the political realm.   No, it’s the border that’s the tough part for us.  We hope, in our heart of hearts, that the steps set out at Minsk and which are aimed at uniting Donbas with Ukraine do not work”.

Khodakovsky makes no secret of the so-called ‘republics’’ total financial and political dependence on Moscow.   He also cites reports that Russia is spending up to 1.5 billion dollars a year on Donbas.

Of course, officially the militants claim to hope “for positive outcomes” of the Minsk negotiations.  Both they, and Russian President Vladimir Putin constantly try to blame lack of progress on Ukraine, claiming that it is Ukraine’s failure to allow ‘elections’, introduce ‘special status’ and an amnesty law.

The lie is given by the ongoing shelling and deaths of Ukrainian soldiers, the frequent attempts to obstruct the work of OSCE monitors and ongoing refusal to release hostages on an all for all basis.

Even if Khodakovsky is not an official representative of the militants, his words regarding the so-called ‘local elections’ should surely be heeded by those western countries who have put pressure on Ukraine to make progress specifically on ‘elections’.  The recent ‘primaries’ which the militants claimed were to prepare for implementation of the Minsk accords were indeed mere ‘show’, with no choice at all and the ‘international observers’ brought in all known for their unwavering pro-Kremlin position.