Kremlin’s proxies purge memory of victims of Holodomor and political repressionRussia’s ’new approach’ to Stalin and extended secrecy about his victimsStalin Museum: Putin’s Russia Immortalizes Bloody DictatorAnger and Protest over Stalin Monument in YaltaPortrait of Stalin appears in Russian-occupied CrimeaStalingrad as latest step in re-glorification of tyrantNeo-Nazis in Moscow’s ServicePro-Russian separatists start their own anti-Semitic TV channelPro-Russian, anti-Roma, anti-Semitic and hunting out Ukrainian speakersThe Donetsk anti-Semitic leaflets – what should not be overlookedEast Ukraine crisis and the ’fascist’ matrixRussia continues its false narrative as defender of oppressed minorities in UkraineRussian propaganda claims Jewish organizations supporting Maidan are bringing on "second Holocaust"The Crimean referendum’s neo-Nazi observersPutin’s Neo-Nazi HelpersChief Rabbi and others dismiss Putin’s “anti-Semitic extremist” claimsRussian propaganda must be challengedWestern Media: Don’t distort the situation in Ukraine!Russia’s aggression poses dangers beyond Ukraine’s bordersCrimea: Anti-Semitic card and other provocation in time of siege
• Topics / Victims of political repression 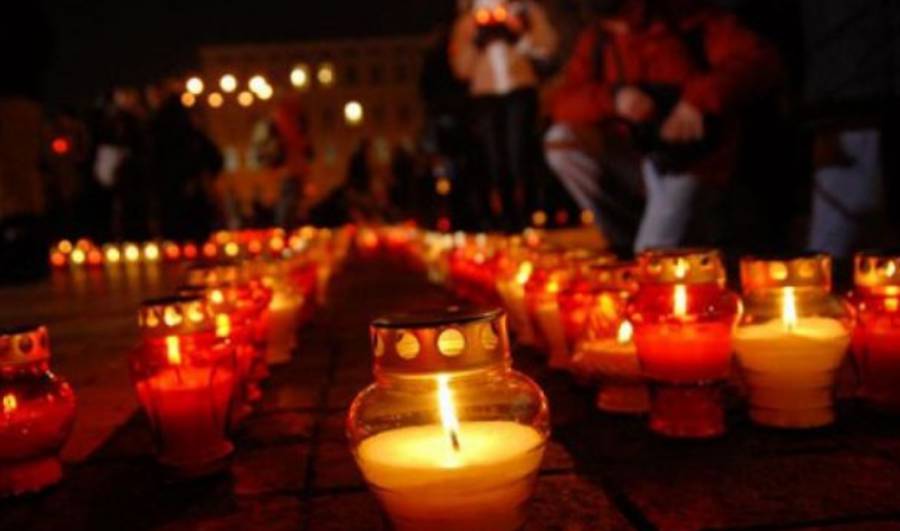 Throughout Saturday, people gathered on Maidan in Kyiv, in Lviv and other Ukrainian cities to remember the millions of men, women and children in Ukraine and Kuban who were starved to death during the man-made famine known as Holodomor 1932-1933.  Remembrance ceremonies have also taken place in other countries this weekend.

Unfortunately, Russia’s leaders over recent years have decided that if Russia calls itself successor to the Soviet Union, this means continuing the latter’s lies and aggressive denial of Holodomor.  Books about Holodomor were added to the Russian List of ‘Extremist’ Texts back in 2012, and now even a pivotal work by Rafael Lemkin, who first used the term ‘genocide’, has just been added to the List (as no. 3, 151).  Kremlin-backed militants in Donbas have followed suit, even deciding to dismantle the Memorial to the Victims of Political Repression and Holodomor in Snizhne (Donetsk oblast), claiming such a move to be aimed at the “reinstatement of historical justice”.

It is now 83 years since Holodomor and the third year that Ukrainians have been forced from their homes in Crimea and Donbas.  Others are living under Russian or Kremlin-backed militant occupation, also in desperate need.