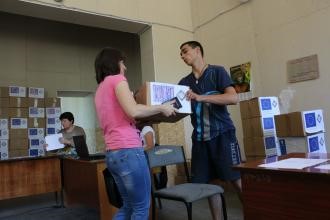 Donetsk, November 26, 2016 - People in Need’s (PIN) office in the eastern Ukraine’s city of Donetsk has been visited by representatives of de facto authorities in non-government controlled areas who informed PIN’s representative that the official accreditation allowing PIN to operate in the area has been revoked. Authorities did not state any reason why they revoked the accreditation yet.

Local authorities have taken immediate actions to close PIN’s office including sealing the warehouse with humanitarian aid and ordering all international aid workers to leave the non-government controlled areas within 24 hours.

People in Need (PIN) is extremely concerned that this will have a negative impact on the most vulnerable civilians still suffering from the conflict in Eastern Ukraine. People in Need together with another major international organisation were the only two international organizations on the ground providing humanitarian aid in non-government controlled areas of Ukraine. PIN has been delivering humanitarian aid since late 2014 to hundreds of thousands of conflict victims in this area.

“Since the early days of the conflict, PIN has been assisting to civilians on both sides of the contact line, pursuing core humanitarian imperative and principles such as neutrality and impartiality, despite all challenges and problems associated to such work,” says the People in Need Director, Simon Panek. “Therefore we do not understand the steps of de-facto authorities preventing us from delivering the assistance for people, who are in dire need, especially with the winter started,” he adds.

The situation of dozens of thousand beneficiaries supported by People in Need is getting critical with the winter season.

“We’ve helped people with rehabilitation of their houses destroyed as a result of continued fighting. We are providing food to people living alongside the contact line as well as in the places affected by the lack of assistance,” says Tomas Kocian, PIN’s humanitarian Operations Coordinator. “In places, where infrastructure and especially water distribution system were destroyed, PIN regularly provides people with access to water,” he adds, describing the scope of PIN’s work in the area.

In 2016 alone PIN has distributed monthly food rations to 469,841 people, 104,879 individuals have benefited from shelter and house rehabilitation program, and more than 95 000 gained access to safe drinking water throughout PIN’s program in non-government controlled areas. “With upcoming winter we were to intensify our support to the most vulnerable. For example, now more than 500 households will not receive new windows to protect them from the winter,” explains Tomas Kocian.

People in Need has worked in Donetsk since November 2014. In July 2015 along with all other humanitarian NGOs, the organization had to interrupt its operation and waited to receive official accreditation from local authorities.

“In October 2015 we received the accreditation together with the International Committee of the Red Cross. All other international NGOs have had to leave Donetsk. Since that moment we re-apply for the renewal of our accreditation on a weekly basis with the submission of our assistance plans for validation from the authorities,” Tomas Kocian explains on the working conditions in Donetsk. “Until now we fulfilled all the requirements from authorities and inform them very regularly about our operation and achievements. Authorities did not deliver us officially any reasons why they revoked our accreditation nor gave us any sign there were issues that needed to be tackled.”

For more information on work of People in Need in Ukraine, please visit the web sitehttps://clovekvtisni.cz/en/humanitary-aid/country/ukraine

For further information please get in touch: