Yanukovych ‘doesn’t remember’ the bloodiest day of Maidan killingsPolitical PR & sabotage instead of real investigation on eve of 2nd Maidan anniversaryUkraine’s only trial over Maidan killings under threatPolice & judges accused of impeding prosecution of crimes against Euromaidan activistsAnother person charged with Euromaidan crimes allowed to escape?Ex-Security Service chief in custody over Euromaidan killingsSo who doesn’t want justice for Euromaidan victims?High-ranking Berkut officer charged over Euromaidan killingsEuromaidan: A Year of Impunity and what went wrongEx-Berkut officer on trial over AutoMaidan ambushEx-Berkut officers arrested on suspicion of involvement in Maidan killingsWhere are 13 mysterious Berkut sniper suspects?Who (hasn’t) answered for crimes against Maidan?Maidan killings suspect missing after being released from custodyTwelve detained on suspicion of involvement in the gunning down of Maidan protesters (updated)Blood and Berkut Sniper Bullets on the President’s HandsMustafa Dzhemiliev on Maidan: I’m proud of you, dear fellow UkrainiansBerkut snipers aimed at protestersWaiting for more bloodshed?Open threats and covert plans as ‘hostage law’ deadline nears
• Topics / Law enforcement agencies
• Topics / Human Rights Violations associated with EuroMaidan 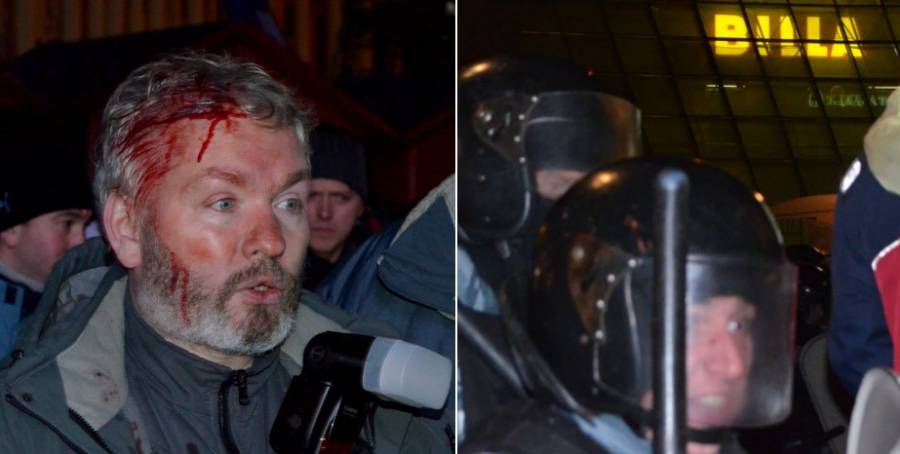 Three years after the savage dispersal in the early hours of 30 November, 2013 of young students and other activists on Maidan, none of the Berkut officers directly involved have been convicted, and some are continuing to work in the police.  The reason in many cases for the lack of progress lies not in the investigators, but in sabotage by the courts

In a recent Ukrainska Pravda interview, Serhiy Horbatyuk, Head of the Special Investigations Department spoke about developments in their investigations and about what – or who – is obstructing progress.

Horbatyuk once again warned against fixation on prosecuting former President Viktor Yanukovych at the expense of attainable and important prosecutions of those who carried out the crimes.  This is a fundamental point of disagreement between Horbatyuk and the current Prosecutor General Yury Lutsenko, who wants a big Yanukovych case, with all the various episodes united within it.  The problems lie not only in the fact that Yanukovych is in hiding in Russia and would have to be tried in absentia.  There are many others who committed crimes, and Horbatyuk is convinced that each individual episode should be investigated and passed to the court when the investigation is concluded.

This, unfortunately, does not guarantee that justice will be done.   Horbatyuk cites a disturbing number of cases which suggest sabotage by the courts, especially where high-ranking officials are involved.

The indictment against former Deputy Interior Minister Serhiy Lekar, for example, was passed to the court in January 2015.  Given the will, the court trial could have long ended.

Lekar is accused of initiating decisions passed by the Cabinet of Ministers which enabled the arming of police officers with powerful Russian-made grenades which had not passed through the normal checks, and the spending of 1.2 million UAH on these special devices.

The same situation applies with the former head of the Kyiv City State Administration Oleksandr Popov, sent to court in February 2015.  Two months later the cases of 4 Berkut commanders accused of involvement in the violent dispersal on Nov 30 were also sent to the court.

The judges are dragging their heels and failing to even set dates to hear the cases.

There have also been no court hearings into the charges against Oleksandr Yefremov and two other MPs on charges of rigging the results of the vote on the ‘dictatorship laws’ brought it with gross irregularities on Jan 16, 2014.   These were sent to the court in September 2015.

This is clear judicial sabotage. Ukraine’s Constitution prohibits the formation of any special courts, yet the valuable work carried out by Horbatyuk and his Special Investigations Department is meaningless without court examination and verdicts.  Horbatyuk says that in parallel to their investigations, there needs to be a proper clean-up of the judiciary and law enforcement system.  It is vital that there is clear and unequivocal reaction to each case of unlawful action by the judges.

That there is no such response is clear from the failure to investigate even the investigators’ application lodged in April 2015 for disciplinary proceedings against or the dismissal of 2 judges over infringements.

Almost 15 thousand Berkut and other police officers were involved in events connected with Maidan.  Horbatyuk says that around half of the Berkut officers are continuing service, while the head of a special forces regiment responsible for ensuring public order is himself a suspect in one of the criminal proceedings.

290 Berkut officers were deployed on Nov 30, with the 200 of them from the Kyiv Berkut most actively involved.  Horbatyuk explains that all those who took part in the violent dispersal have been identified, but not those who directly (and savagely) beat the activists.

This is not for lack of trying.  The officers were in masks or helmets and close study of the video footage available does not enable direct identification.

On the eve of the anniversary, new photos were posted on Facebook and lawyers of victims have asked people who were on Maidan to look at them and see if they recognize the officers.

Euromaidan had begun a week earlier, however few if any seriously expected it to succeed.  It was probably the brutality demonstrated in the morning of 30 Nov, that changed the course of events.  A large number of authoritative organizations and public figures came out with statements of protests and refusals to in any way cooperate with a regime which had so compromised itself. On Dec 1, there were hundreds of thousands of people in the centre of Kyiv.

On July 1, 2015, Horbatyuk’s department sent the court indictments against two deputy heads and two commanders of Kyiv Berkut over the events on Nov 30.  The report stated that 15 people had been formally informed of suspicions, though 9 of them were on the wanted list.  It also mentioned that the indictment against Oleksandr Popov was being examined separately.

MP Serhiy Leshchenko reported at the time that two of the men – Yevhen Antonov and Andriy Dydyuk had initially been suspended from the police force by Interior Minister Arsen Avakov, but then reinstated.

On Wednesday evening about 15 victims blocked the Shevchenkivsk court where yet another hearing into the charges against four defendants was adjourned.  They demanded the dismissal of Lutsenko and of any officers suspected of involvement in crimes against Maidan, and called for the review of cases to be speeded up.  The action is unlikely to result in any change, however their frustration on is not hard to understand.

Three years after the first violence, and almost 18 months after at least some of the suspects' cases where passed to the courts, there remains no progress on their ‘trials’.