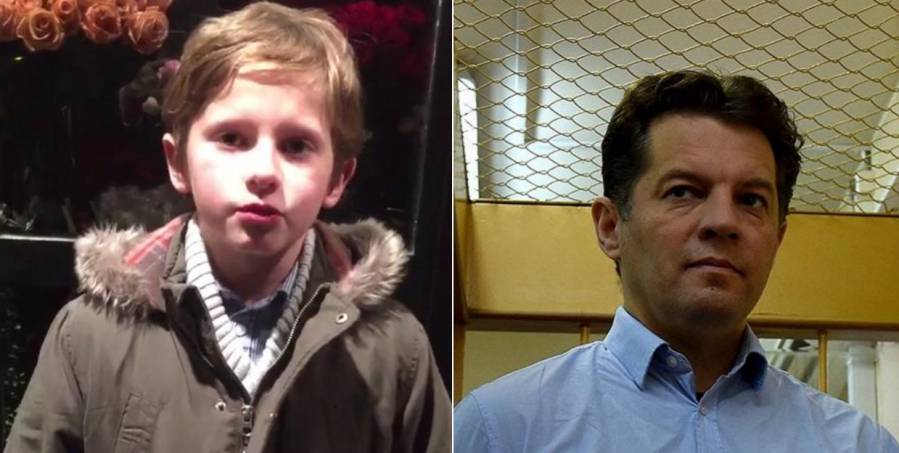 Two months after Roman Sushchenko, Paris correspondent for Ukraine’s information agency Ukrinform was seized in Moscow while visiting relatives, his son Maxim has made a brief and moving appeal.  He explains that the Ukrainian journalist is his Papa, and asks that those “on whom this depends” let him go so that he can come home to Maxim and his mother.

47-year-old Roman Sushchenko has been working for Ukrinform since 2003, and has been the agency’s French correspondent since 2010.  Russia has accused him of ‘spying’, and has forced his lawyer Mark Feygin to sign an undertaking not to divulge any information.  Feygin was, however, able to provide one crucial piece of information, namely that there is nothing to divulge. He has now also spoken of a disk that Sushchenko was asked to take back to Paris for another journalist, and believes this to have been a deliberate trick by Russia’s FSB [security service].

The lawyer is convinced that this case is purely political and that Russia would be willing to agree to some kind of exchange.  Speaking on December 1 in France’s Senate, he explained that France has the political and diplomatic ability to influence Russia’s leadership so that they release Sushchenko.  He stressed the need for support from France’s parliament.

As of the beginning of December, Russia is holding 36 Ukrainians prisoner, either in Russia or in occupied Crimea, on politically motivated charges.

Sushchenko is, however, the first journalist to have been arrested and on charges of spying in a country which he was not working or living in.

He was seized by FSB officers shortly after arriving in Moscow on September 30 and was held incommunicado for 2 days. His whereabouts were first revealed by human rights monitors who came upon him while visiting Lefortovo remand prison.  The whereabouts of other prisoners have been discovered in the same way, and it is unclear whether the FSB was intending to report on Sushchenko’s arrest or hold him longer without anyone knowing where he was.

Even this story had not been properly coordinated with the same state-controlled agency citing the Russian Foreign Ministry as saying that Sushchenko had not had journalist accreditation.  This was clearly absurd since Sushchenko was visiting his cousins who live in Moscow.  In fact, Feygin believes that it was a friend of theirs who ‘denounced’ the journalist.  It is quite possible that Sushchenko had learned of such information that he thought would be of interest.  This is normal behaviour for a journalist, and hardly ‘espionage’.

Dmitry Oreshkin, a well-known Russian political commentator, believes that this new arrest is aimed, firstly, at showing that the tense relations remain and that nobody should let down their guard.  Nobody takes the actual charges seriously.  The International Press Institute, for example, expressed concern that Sushchenko’s arrest is a politically motivated move to impact the ongoing conflict between the two countries”.  They, Sushchenko’s colleagues in France and in other countries have demanded the journalist’s release.