The Bill on SBU is unacceptable, it should be buried Appeal of human rights organizations to the UN Special Rapporteur on Combating Torture regarding the shameful response of the Government of Ukraine to the CPT report on the results of the ad hoc visit in August 2020Protests throughout Ukraine following 7-year sentence against civic activist Serhiy SternenkoSo what will “New SBU” be?What is wrong with the bill on SBU?2020: There was no worse year in the realm of human rights after the Revolution of DignityExpert opinion (Amicus Curiae) on the application and interpretation of the case-law of the European Court of Human Rights in criminal proceeding № 52017000000000361Opinion on the political motives of criminal persecution and violation of human rights in the case of Sergiy PashinskyHuman Rights Agenda calls on the government to return to legal means of leaving the constitutional crisisВИСНОВОК СПЕЦІАЛІСТА (Amicus Curiae) з питань застосування та тлумачення практики Європейського суду з прав людини в кримінальному провадженні № 52017000000000361Право на охорону здоров’я у в’язницях протягом пандемії COVID-19Kyrgyzstan: Human Rights Defender Azimjon Askarov Dies in PrisonPrison problems. Old cases of people sentenced to life imprisonment is the legacy of the past – of the Soviet UnionUkraine to generously pay “judges” in Russian-controlled Donbas after shock Constitutional Court judgementUkraine axes English & Crimean Tatar TV to launch risky Russian channel for occupied Donbas and CrimeaUkrainian blogger to be deported from occupied Crimea after criticizing Putin and Russian annexationDictatorship law that could force Poland out of the EU brings thousands out in protestUkrainian journalist in Russian-occupied Crimea fined for negative Facebook post about PutinUkrainian court orders TV Hromadske to retract correct description of C14 as ‘neo-Nazi’Ukrainian journalist Haivoronsky jailed in occupied Crimea for failing to treat politically motivated ‘drug dependence’
• Topics / Social and economic rights

Ukraine’s Most Overlooked Reform Could Bring in Billions 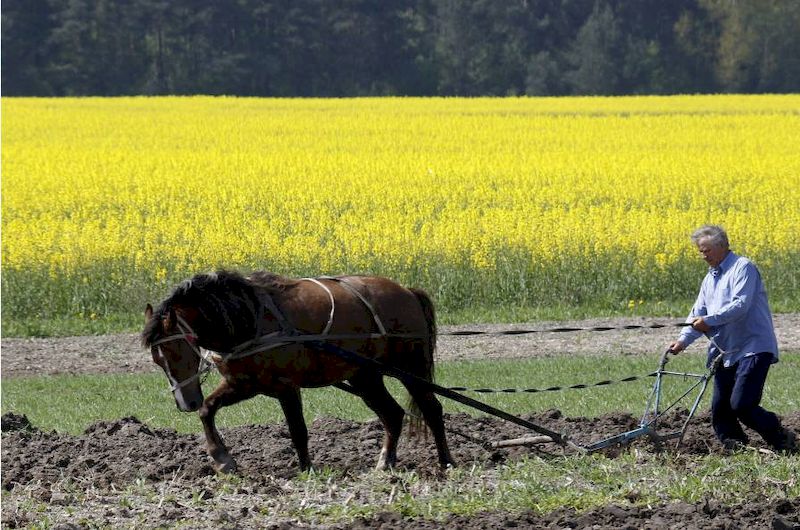 A man and a horse plow up the field near the village of Bugayvka, some 130 km (81 miles) east of Lviv in western Ukraine May 10, 2011. REUTERS/Gleb Garanich

Parliament’s unwillingness to allow the sale of private farmland “is the biggest source of immediately available economic growth that the government has failed to utilize,” Swedish economist Anders Åslund has noted.

Ukraine, the breadbasket of Europe, is blessed with fertile black soil. Today it is capable of feeding half of Africa, or 600 million people. But instead of tapping into this fantastic resource, Ukrainian legislators stubbornly refuse to allow the sale of private farmland, which would unleash farmers’ productivity and massively benefit the economy. The October vote was the eighth failed attempt to lift the moratorium on selling agricultural land since it was first introduced in 2000. Since then, Ukraine has had two revolutions and four very different presidents, but politicians of all persuasions remain adamant: the 6.7 million landowners who own a total of twenty-seven million hectares shall have no right to be full masters of their property.

After collective farms were disbanded, every member was entitled to an equal share of land. Since then, many landowners or their children have moved to cities or grown old and unable to work the land. They can only rent their land.

A partial explanation for this consistent rejection lies beyond the realm of material factors: landowners are afraid to sell their land to big businesses and land speculators; they fear that they will get ripped off. At the early stages of land reform, prices are expected to be very low. No matter how strong and reliable the safeguards are, nobody is eager to turn his property into a test, while the market goes through this uncertain stage.

Ukrainian agriculture is dominated by large agroholdings, which control approximately 15 percent of the total market share in agriculture and their reach is growing. By renting land for a fraction of the price they would have to pay if they were to buy it, the owners of these agroholdings are the main beneficiaries of the leasing system. Consequently, they fiercely oppose private sales.

There is only one way out of this situation: the government should assume all the risks associated with land reform.

A taskforce made up of government officials, World Bank experts, independent consultants, and academics has developed a radically new concept of land reform for Ukraine. In stage one, ten percent of almost twenty-five million acres of state-owned land would be sold to develop benchmarking for land prices in Ukraine’s twenty-five regions. It would be crucial to carry out the sales proportionally throughout the entire country, since Ukraine is large and soils from different regions have varying economic and agricultural qualities, and different value.

Stage one would take two years and a critical mass of transactions to define price benchmarks for every region. It goes without saying that transactions must be transparent, open, and easy for potential buyers. An e-commerce platform, the so-called land e-bay, was designed for these purposes. An online system would allow remote participation to the widest range of buyers, while its openness may prevent profiteering and shady deals between officials and buyers.

Upon completion of the first stage, we would have a much better idea which properties are the most desirable, the lowest admissible bid, and the market’s framework. After that period, any limitations on land sales should be lifted.

Populist politicians like to spread the myth that everyone who acquired their shares of land after the dissolution of collective farms would sell immediately after the moratorium is lifted and flood the market. According to various estimates, no more than 15 percent of landowners would sell their plots. Under the proposed model, buyers would be individuals and the government represented by a state-owned regulating company. If buyers conspire against a seller and offer an artificially low price, the state-owned regulating company would buy this plot of land for an average market price set for this region and resell it later for a higher price, since land prices tend to grow with time.

The experience of Central Europe and the Baltic countries is telling: in the first three years of land reform, land prices jumped 25 percent each year, while from the fourth to eleventh year, they increased 8 to 10 percent each year. In addition, farmers saw an average growth of 30 percent in crop yields in the first two years after the reform due to the more efficient use of crops.

According to one rough calculation, the economy would gain $8 billion by the end of the first stage of land reform.

On December 2, twenty of Ukraine’s leading economists and policy makers urged the Rada to lift the moratorium on land sales in an open letter and recorded a video appeal to the nation.

In Washington and in many European capitals, Ukraine is increasingly associated with growing fatigue. Here land reform could make a dramatic difference: Ukraine would not only become more prosperous, but it would stop looking like another hopeless former Soviet republic unable to reform itself.