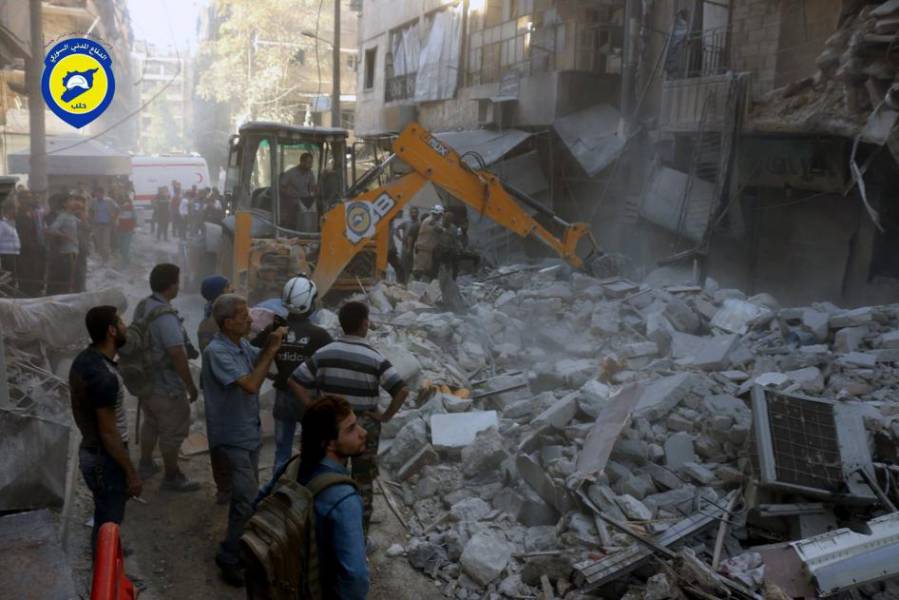 Russia’s Migration Service is consistently denying Syrians asylum, claiming that there is nothing to stop them returning to their country.  The officials cite Russia’s Foreign Ministry and Defence Ministry, ignoring both Russia’s direct involvement in making large parts of Syria unsafe for civilians and reports from the UN and numerous NGOs.  Russia is also failing to play a proper role in helping refugees, while actively using the refugee crisis in Europe for anti-EU propaganda.

A report just published by the Russian NGO Civic Assistance lists the methods Russia uses to avoid granting asylum to refugees fleeing for their lives, including small children who are clearly in particular danger.  They cite cases where even pregnant women have been told they should return to Syria.

Up till the middle of 2014, the UN put the number of war-related deaths as around a quarter of a million people, including thousands of women and children.  It is only the intensity of the fighting that has prevented statistics from being held since then, but the reports from Aleppo make the scale of human suffering undeniable.  Estimates put the figure of Syrians forced to flee as of the beginning of 2016 at over 5 million.

There were 7,096 Syrian citizens in Russia as of April 5, 2016, with a number of these being people who live and work in Russia and are not seeking asylum.   There are also, however, people who came before the war, but cannot return because of military action, and those who came during the war, for example, the families of people working in Syria.

In 2015 5.5 thousand refugees, mainly from Syria, left Russia via the border crossing for Norway, with a further 500 leaving in the same way for Finland.  It was reported at the time that Russia was positively encouraging refugees to take this route, and certainly Norway has now made it much harder.

Considering the relatively small numbers and Russia’s direct engagement in the conflict, it would be reasonable to except that genuine asylum-seekers would find refugee.  Not at all, however,

Civic Assistance cites cases where Syrians have been sent to Turkey, as well as attempts to forcibly return people to Damascus.  In February 2016, the deportation of  three Syrians was prevented when they were already at the airport.

Since the conflict began, over 2 thousand Syrians have asked for asylum.  One person received it.  Of the 4462 people who asked for temporary refuge, the statistics are better with 3,306 Syrians receiving a positive response.  Positive but temporary, since such permission is for one year and it is not at all guaranteed that it will be renewed at the end of that period.

The chances are that people will be turned away from migration service offices without commencement of asylum procedure.  Even if they’re given an appointment, this could be for months ahead, meaning that the person remains without any papers.  At best, they are easy prey for corrupt police offices, at worst they can end up before a court as not being legal in Russia, and get a deportation order.  The human rights activists say that in this case, they can end up imprisoned in a unit for people awaiting deportation, with the conditions here like in a prison, and the waiting time up to a couple of years.  The authors of the report say that without lawyers, an independent interpreter, etc., you might as well not try to get through the system.

Russia’s open involvement in the Syrian war began in September 2015.  The authors of the report note that the already pitiful number of people at least allowed to begin asylum procedure felt in 2015.  Although statistics are not yet available, Civic Assistance believes that the situation has further worsened.  The migration services, it says, are even more reluctant to give refugee status, and claim that the situation in Syria has improved.

It is clear from the UN Human Rights Council’s September 2016 Report of the Independent International Commission of Inquiry on the Syrian Arab Republic that the grounds for granting asylum are there, with only the will missing.

In September 2016, Human Rights Watch [HRW] accused Russia of failing to do its fair share to help Syrian refugees.  It called its contribution to meeting the needs of refugees, displaced by the conflict, “negligible, while its military involvement in the conflict has been significant.”

Around the same time Oxfam International issued a “fair share analysis” for Syria-related assistance.  Based on gross national income, etc., the international charity estimated that Russia should pay approximately $717 million of the humanitarian funding burden. “Oxfam calculated Russia’s actual contributions to be 1 percent of its fair share, the lowest percentage of any of the 32 donor countries surveyed.”

At the beginning of December HRW accused the Russian-Syrian coalition of war crimes during a month of bombing in Aleppo in September and October.  It said that “the Violations Documentation Centre, a Syrian civil monitoring organization, had documented that the bombing campaign killed more than 440 civilians, including more than 90 children. Airstrikes often appeared to be recklessly indiscriminate, deliberately targeted at least one medical facility, and included the use of indiscriminate weapons such as cluster munitions and incendiary weapons”.

Refugees as a political weapon

Over the last year or more, many analysts have reported that Russia is deliberately using, and probably fuelling, the refugee crisis for its own purposes in Europe.  While not all commentators will go so far as to suggest that this is one of the aims of Russia’s ‘Syrian campaign’, the propaganda and political uses Russia is making of it seem difficult to ignore.  Back in March this year, Jānis Sārts, director of the NATO Strategic Communications Centre of Excellence told the Observer that Russia had a track record of funding extremist forces in Europe, and that he believed there was evidence of Russia agitating in Germany against Merkel.

Following Donald Trump’s victory in the US elections which many believe to have been helped by, at very least, government-sponsored hackers, many view Merkel as the last bastion for liberal democracy – and of resistance to Russia through her strong stand on sanctions.  Russian state-controlled media has since become even more aggressively anti-Merkel, and it seems likely that refugees, whom Russia has no intention of helping, will be further used as a weapon in that battle.