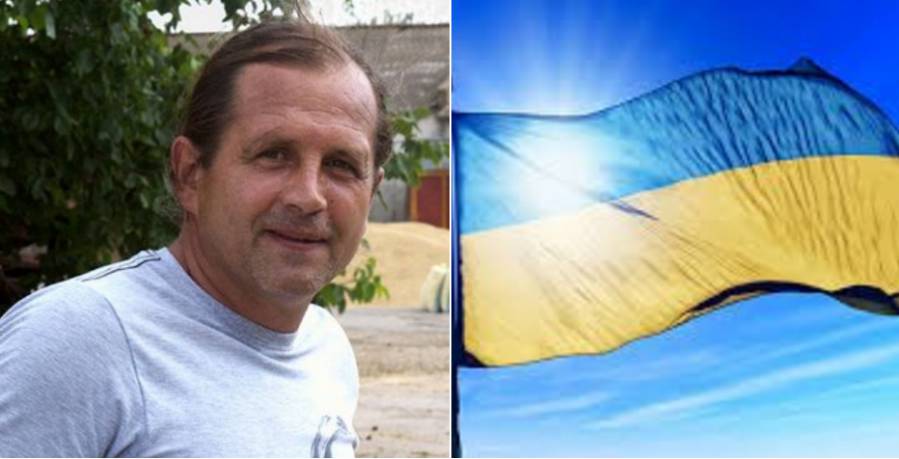 Crimean activist Volodymyr Balukh has been arrested by the Russian FSB just 10 days after he hung a plaque on his home in memory of the people killed during Euromaidan.  The 44-year-old from the north of Crimea has already faced surreal criminal proceedings over the past 18 months which seem directly linked to his pro-Ukrainian position, and the charges this time are equally lacking in credibility.

The Crimean Human Rights Group has learned from Balukh’s wife that the FSB arrived in the morning of December 8 at his home and that of his mother (in the same large village).  The searches lasted around 4 hours, with the FSB claiming to have found 90 bullets and several trotyl explosive devices in Balukh’s attic, and arresting him.

Balukh’s family is convinced that the FSB ‘found’ what they themselves had planted.  There is certainly nothing to link Balukh with any act of violence, and given previous unwarranted searches and his refusal to conceal his pro-Ukrainian position, it defies belief that, even if he had such items, he would have kept them in his home.

At present, it is only known that Balukh is in custody and it looks as though the FSB intend him to stay there.

On Nov 29, Balukh nailed a plaque to his home, calling it No. 18 “Heroes of Nebesna Sotnya St’ with Nebesna Sotnya, or Heavenly Hundred referring to the over 100 victims of the Revolution of Dignity or Euromaidan.  The initial reaction was swift but only verbal, with the head of the local council arriving and demanding that he remove it.

On Dec 1, Balukh told Hromadske Radio that the plaque was “of course” still in its place, as too was the Ukrainian flag which he first raised during Euromaidan and which he did not remove after Russia invaded his native Crimea.

As reported, Balukh’s problems began on April 30, 2015.  Two men, one a police officer, the other from the FSB, appeared while he was doing some work on his mother’s home.  He refused to go with them unless they produced a warrant.

After learning that the men had also turned up at his home, he went into hiding until May 10.  By then the FSB had turned up at his mother’s place 4 times.  Both homes had been turned upside down and the Ukrainian flag ripped down.   He has since replaced it with one given to him by activists in Kyiv.

The officers claimed to be looking for a stolen box from a tractor.  Since Balukh owns two tractors, the story was wildly implausible.  The investigators’ lack of imagination would also have been comical, had the situation not been so serious.  They asserted then that Balukh had been in a café in Razdolne, drunk, and offered to sell the box to a stranger, giving his full name and address.

The tractor prosecution was abandoned, but not the harassment, nor the story about a drunken offer in a café.  There was a brief 72-hour detention in July 2015 where the police claimed that he had refused to obey a police officer, but the court fined him for supposedly drinking alcohol in a public place.  Then on Nov 14, 2015, men burst into his home and began beating him and forcing him into their car.  This time they claimed to suspect him of stealing a car, with the other details – the drunken state, the café unchanged.

With bad fiction and no facts, they opted for Article 319 of the Criminal Code – ‘insulting a police officer’.  One of the officers – Yevgeny Baranov claimed that during that early morning visitation, Balukh had tried to run away.  The police had supposedly done nothing more than used handcuffs, with Balukh allegedly using bad language.  In the indictment, this was presented as denigrating Baranov’s honour, infringing the normal activities of the police and undermining their authorities.

An unquestioning ‘judge’ in occupied Crimea sentenced him to 320 hours’ mandatory labour on Feb 5, 2016.  This, however, was overturned and the ‘case’ sent for a new court examination.  It was cheering that one prosecutor and judge had found with the courage to acknowledge the absurdity of the charges, but this was not repeated.  The court hearing on June 10, under M. Bedritsky, reverted to the original sentence.

Asked by Hromadske whether he did not fear criminal proceedings and a real prison term, Balukh answered:

“You know, there are no wars without victims. If I must become a victim of Russia’s war against Ukraine, then so be it.  I’m a fatalist – do what you have to, and what will be will be.”