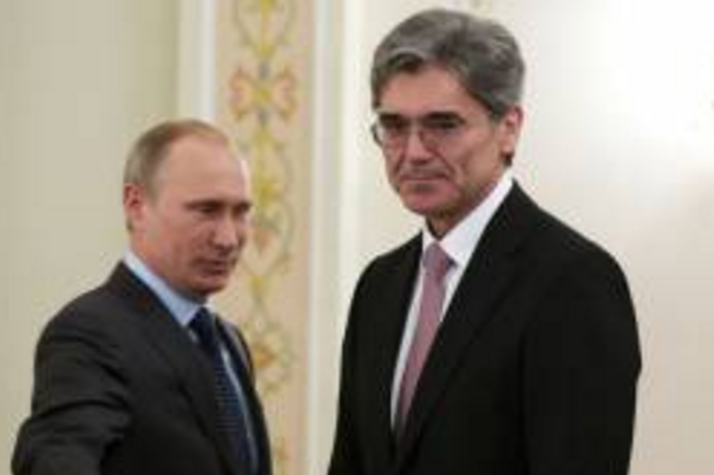 A new twist has been reported in the story of Siemens gas turbines which could be used to deliver the turbines to Russian-occupied Crimea without Germany’s Siemens openly bypassing EU sanctions.  A check is urgently needed since the scam suggested would cast a shadow over Siemens and demonstrate serious failings in sanction controls.

Vedomosti reported back on June 30, 2015 that Siemens Gas Turbine Technologies LLC, a St Petersburg subsidiary of Siemens, was set to provide gas turbines for a new power station in Crimea.  The deal was supposed to have been reached in Spring with the Siemens turbines officially contracted for a station on the Taman Peninsula (Krasnodar region, Russia) but in fact destined for Crimea.

Vedomosti’s unnamed sources suggested a conscious fiddle with the alleged new power station in Taman used as a smoke screen.  The turbines were to be purchased by Technopromexport, a subsidiary of Rostec which Russia contracted a year ago to build power stations in Simferopol and Sevastopol, with 25 billion roubles of the cost funded by the Russian state.

Siemens dismissed the allegations, and insisted that its joint venture was making turbines for a separate Taman power station.   Reuters, however, reported in early August 2016 that three separate sources had told them that builders of two power plants in occupied Crimea were finalizing plans to install the Siemens turbines.  “The sources, who were all familiar with the technical details of the plants, said they are compatible only with Siemens turbines.”

The report went on to say that “there was no suggestion that Siemens knew of or condoned the planned transfer of its turbines to Crimea”.

In fact, the report by Ihor Maskalevych in Ukraine’s Dzerkalo Tyzhnya suggests a ruse designed to protect Siemens’ reputation, while also getting the turbines that Russia desperately needs.

The author points out that with 90% of Crimean energy coming from Ukraine, Russia needed to come up with some solution after its invasion and annexation.  The decision was taken back in 2014 to build new electricity cables across the Kerch Strait and to build power stations in Simferopol and Sevastopol.

Russia, which has sophisticated weapons of mass destruction, is not capable of producing the gas turbines required, however these fall under the ban on supplying equipment from the EU to occupied Crimea.

Maskalevych believes that the story about a Taman power station was a front from the outset, aimed at ensuring that Siemens was not accused of violating sanctions.

The tender for building a Taman power station was only announced in the summer of 2016, and “ended due to the lack of any bids”.  Four gas turbines were ordered from the Siemens joint venture, although the tender specifications for the purported Taman power station only envisaged two.  Two turbines have already been provided.

Maskalevych believes that when the plans were first drawn up, the Kremlin was convinced that sanctions would soon be removed or that Ukraine itself would soon not exist.

Russian President Vladimir Putin miscalculated on both scores, and the plan needed to be adjusted.

The first indicator of the new arrangement was seen in the somewhat nominal change of contractor for the power stations in Crimea.  It was and remains  Technopromexport, however the latter ceased to be a part of Rostec, and became a daughter company, with a share value of under 10 thousand USD.

Then, lo and behold, Technopromexport suddenly proved to be facing bankruptcy, with Rostec initiating the procedure.  At a meeting of the creditors at the end of October 2016, all attempts to avert the move were rejected.  The reason, the author says, is obvious: the property of a company made bankrupt goes up for sale.  This ‘property’ now includes four Siemens turbines, worth 167 million EUR.

Maskalevych suggests that Siemens does not want to lose the promising Russian market which it has profited from for over 100 years, but does not want scandal for violating sanctions.

Siemens has, therefore, gone further than simply making public assertions that its turbines are intended for a non-existent power station on the Taman Peninsula, and has even imposed various conditions.   The agreement with Technopromexport stipulates that the turbines must not be used on power stations with direct power supply to Crimea.

Any company that buys the turbines if sold as part of bankruptcy procedures could, Maskalevych believes, refuse to comply with the conditions of the contract between Technopromexport and Siemens.  It could, in short, provide the turbines to Crimea where they have been awaited since September 26 this year.

In late November, Radio Svoboda’s Crimean Service spoke with Igor Yuskhov, a leading analyst from the Russian Foundation for National Energy Security. He commented that the supply of the Siemens turbines for the two power stations in occupied Crimea would “demonstrate the effectiveness of the sanction policy against Russia”.  He suggested that the information had been fed to the media to see if there was a reaction from the EU, and claims that so long as the turbines are passed to Rostec and unloaded in Krasnodar, they would not fall under sanction restrictions.

He pointed out that a more global issue was the turbines’ technical servicing which must be carried out by the producer.  Even here, Yushkov suggests that a solution would be found.

At present two of the turbines have already been sent to the Krasnodar region.  It seems that Siemens has now put a hold on the other two and even proposed to check their location.  If this happens, they will ‘find’ that nothing at all is being built.  If the allegations are warranted, we are talking about a joint venture with a Russian partner which makes it near inconceivable that Siemens was unaware of this.

Siemens has long demonstrated willingness to collaborate with Russia.  Just 8 days after Russia ‘formalized’ its annexation of Crimea, the Wall Street Journal reported that Putin “facing increasing isolation from the U.S. and European nations, received a vote of confidence from another important corner: one of Europe’s biggest companies.  Siemens AG Chief Executive Joe Kaeser met Mr. Putin at his official residence outside Moscow on Wednesday. The men posed for the cameras and talked up Germany and Russia’s special economic relationship”.

The collaboration then was a propaganda coup for Russia, and a dodgy deal now to get the turbines to occupied Crimea will also herald a Russian victory, even if less trumpeted.  Such collaboration would be culminating as the International Criminal Court is beginning to investigate Russia for likely war crimes over its invasion and occupation of Crimea and concern is mounting over Russia’s appalling human rights violations in the Ukrainian peninsula.