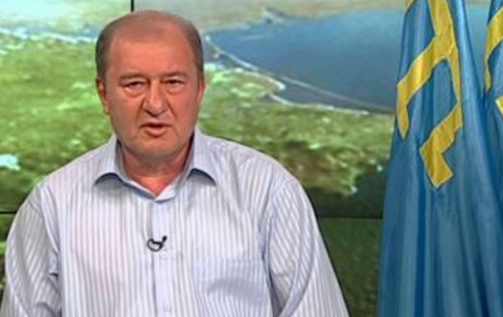 A court in Russian-occupied Crimea has ordered that Nikolai Polozov be interrogated as a witness in the prosecution of Crimean Tatar leader Ilmi Umerov, giving the FSB grounds to demand his removal from the case.  Umerov is facing a possible 5-year sentence for saying that Russia must be forced to leave Crimea and has already been subjected to punitive psychiatry.  Polozov has played an important role in publicizing this extraordinary prosecution, and the FSB clearly want to get him out.

The ‘court hearing’ on Dec 13 was held behind closed doors and without either Polozov or his lawyer, Oksana Zheleznyak.  The secrecy was doubtless to conceal the lack of any justification for questioning Polozov as a witness.  The lawyer has condemned the court ruling as illegal and said that he will be appealing.  Courts in Russian-occupied Crimea pass the rulings demanded of them, so this will probably only serve to delay a move which will also set a very dangerous precedent.  Russia has already used illegal methods to restrict Crimean Tatar rights lawyer Emil Kurbedinov’s work, and spurious attempts to turn other lawyers into ‘witnesses’ could follow.

Ilmi Umerov believes that the FSB may be trying to get Polozov off the case before they bring new charges.  This could be over membership of the Mejlis which Russia has now banned, claiming that this self-governing body of the main indigenous people of Crimea is ‘extremist’.

Umerov was briefly detained on May 12 and soon charged in connection with an interview given to the Crimean Tatar ATR TV on March 19, 2016 in Kyiv.  In that interview he stated that Russia must be made to leave Crimea and Donbas, this being the same position as that taken by all democratic countries.  The FSB has, quite incredibly, claimed that the interview contained “public calls to action aimed at violating Russia’s territorial integrity’. This is under Article 280.1, a new article The interview contains the following words:

59-year-old Umerov has serious health issues which prevented the FSB from imprisoning him as it has the Deputy Head of the Mejlis, Akhtem Chiygoz.  Instead it resorted to punitive psychiatry, having him forcibly placed in a psychiatric clinic for an entirely unnecessary ‘assessment’.

Polozov and his colleague Mark Feygin were extremely active in mobilizing protest against the hospitalization which put Umerov’s very life in danger.  Russia has now responded in customary style through lawless measures against those who expose its repressive ways.