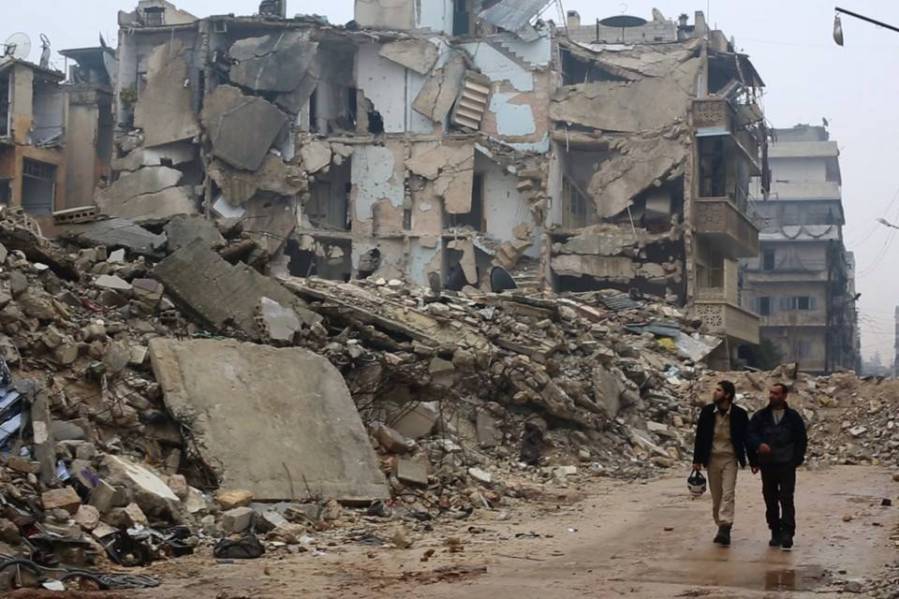 The following appeal is from Raed Saleh, head of the White Helmets, about the 100 thousand civilians believed to still be trapped in besieged eastern Aleppo.  It comes as the supposed ceasefire to allow civilians to leave has broken down, and amid UN reports that the Syrian armed forces, who have taken control with the help of Russia, are indiscriminately murdering all civilians they find, including women and children.

"For the past four years, we the Syria civil defence (or White Helmets), have saved thousands of lives in Aleppo. In the last few days we can no longer even count the dead. We have been asking for a safe passage for all civilians, and on Tuesday we heard that a deal had been agreed. People waited all night in the streets with the rain falling for this evacuation, but today they are being shelled once again and it is that are raining down.

About 100,000 civilians are trapped in besieged eastern Aleppo in a rapidly shrinking space – less than a few square kilometres. On Tuesday, they went through hell - people were shot on sight and hundreds of children were trapped in the crossfire. Hundreds of people remain crammed into small spaces, meaning any new direct strike will hit dozens if not hundreds of people. Bodies are lying on the ground where they have fallen or trapped under the rubble. Civilians have been sheltering underground for days. Without a safe passage, death or detention seem to be the only way out of this nightmare.

Inside this small enclave are those who chose to remain to protect civilians: members of the White Helmets, the doctors and nurses who have rebuilt hospitals countless times, the teachers who moved classrooms into basements to keep Syria’s future alive, and the journalists who revealed the truth about what’s happening. All of these people have been systematically targeted by the Syrian regime and its allies for years. It follows then that if these people are left unprotected, they will be the first to be detained or killed.

And so we repeat our request: Aleppo’s humanitarians are calling for safe passage for all civilians, and those that serve them, out of Aleppo. Yesterday we learned about a deal to get all 100,000 civilians across the four kilometres to Western Aleppo and into some sort of safety: with a few dozen buses and lorries they could all be evacuated in 24 hours. However, this has not happened. We need the international community to pressure those who have blocked the deal. Can anyone country really say it has done everything in its power to stop these massacres?

The countryside around Aleppo where they would be sent is still not “safe”: Russian and regime bombs drop daily. But at least there is no siege there, and parents are not watching their children being killed in front of them.

I have travelled to dozens of parliaments and spoken about every type of death facing Syrians. But often people want to know about what it feels to save a life. I ask the friends of Syria to have that experience today – by doing everything possible in their power to evacuate these 100,000 souls."

The White Helmets in Aleppo have given everything. Now we need the international community to do the same. Please share this message.