Trump’s man in Moscow claims ‘misinformation’ about Crimea, Ukraine was ‘catastrophic’ & sanctions don’t workWhy a Trump Victory Would Put Ukraine in Danger. In Trump’s Own WordsMark it down, Mr Trump, Russia has already gone into UkraineNo surprises as Trump says he could recognize Crimea as ’Russian’ & lift sanctionsA British Foreign Secretary who excuses Russia’s invasion of Crimea?Kremlin’s Donbas proxies congratulate UK for ’doing what they did’ & voting for BrexitBrexit a gift to Putin, the far right & Trump, a blow to democracyEx-Mayor of London Boris Johnson blames Russia’s annexation of Crimea on the EUWhat European Values if Dutch Referendum Result Stands?Appeal by the leaders of Ukrainian national communities to the Dutch populationFormer Soviet political prisoners call on Holland to say yes to Ukraine’s European futurePlaying with fear and ignoranceHow a democratic tool became a threat to democracyUkrainian Jewish leaders appeal to Holland: Give our country the chance to break with the pastDutch referendum puts Ukraine in spotlightRussian media distort mass anti-Trump protests, while Trump blasts ‘dishonest’ US mediaUSA Today Parrots Kremlin Propaganda on CrimeaRussia’s Old Tricks Against New TargetsRussia’s remake trial of Crimean Tatar Mejlis leader provides evidence for international courts The only achievement is that the shootings stopped
• Topics / Politics and human rights
• Topics / Human Rights Abuses in Russian-occupied Crimea

Trump is on collision course with international law over Crimea 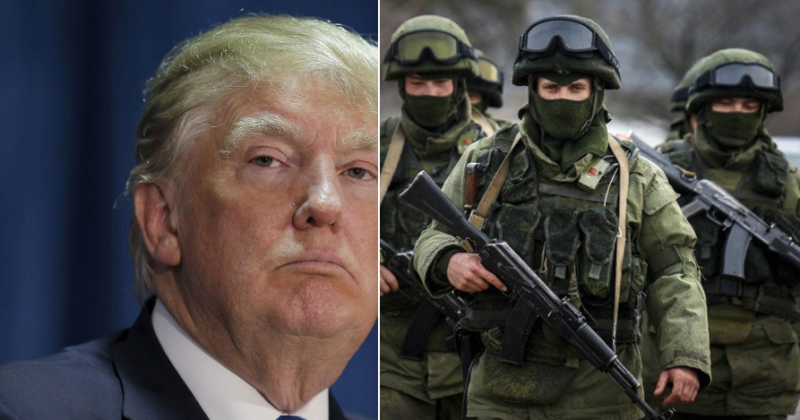 If, as US intelligence believes, Russia interfered in the US elections to get Donald Trump elected, it is certainly being rewarded for its efforts and expense.  At least two of Trump’s men have been in Moscow this month making all the noises the Kremlin wants to hear on sanctions and Crimea.  In the meanwhile, a Republican congressman has openly suggested that Ukraine should ‘trade’ Crimea for support against Russian aggression in Donbas.

While Carter Page is still officially dubbed a former Trump adviser, and Jack Kingston also has no official status at present, Duncan Hunter is a current Republican congressman, one of the first to have publicly endorsed Trump.  As a person who has supported lethal military aid to Ukraine, it is telling that in an interview in December he all but suggested that such aid could come with a condition – that Ukraine ‘accept’ the Russian-imposed status quo on Crimea.

It is also indicative how closely Hunter’s style of speaking echoes Trump’s.  “"What we want to do is we want to arm the Ukrainians not with just night-vision goggles and uniforms," Hunter said. "We want to give them anti-tank weapons. We want to give them anti-air weaponry, anti-drone, counterartillery stuff”. "Do the Ukrainians want the United States to invade Crimea?” Hunter said. “It is not a possibility. So, what’s the answer? If Russians are not willing to leave Crimea but they are willing to leave the east of Ukraine, is that a bad thing? What do the Ukrainian people want?”

Just for starters, they want the USA to remember that Russia carried out the first annexation since Adolf Hitler’s annexation of Austria in 1938, an act of aggression which has seriously rattled Russia’s NATO neighbours, especially the small Baltic Republics and posed the greatest threat to European stability since WWII.  The USA is committed as are other countries to abide by the UN General Assembly Resolution of March 27, 2014 which called on all countries to not recognize Russia’s occupation.  America is, in fact, much more committed via the 1994 Budapest Memorandum which guaranteed respect for Ukraine’s territorial integrity in exchange for giving up one of the largest nuclear arsenals in the world.  Russia may have trampled upon its commitments through its military aggression in 2014.  There is no reason for the USA to follow suit.

Hunter, echoing earlier statements from Trump, is proposing a deal.  “We can arm Ukrainians so that they’re ready for the worst scenario but at the same time make certain concessions to Russia and be friendly with them”.  Hunter also told Voice of America that the USA would be ready to give up Syria in exchange for a cessation of Russian aggression in Europe.

Hunter does not clarify how the USA should “give up” Syria when Russia, together with the regime of Bashar al-Assad, is accused, and with cause, of bombing civilians and other war crimes.

The noises made by Trump himself and by his people in Moscow in early December make the ‘deal’ on Ukraine clear enough, albeit lacking in any transparency.  The USA is given carte blanche to remove sanctions and improve relations with Russia because Ukraine falls silent over Russia’s occupation of Crimea in exchange for help in fighting Russian aggression in Eastern Ukraine.

What a ‘deal’ allowing the removal of sanctions would personally give Trump’s choice for Secretary of State Rex Tillerson and quite possibly Trump himself is calculable.  What it will give America is not.

There is no reason to believe that Russian President Vladimir Putin would hold to his agreement and no realistic way for America to hold him to it.  Probably the contrary.  The zeal with which certain Republicans and Trump’s people are seeking to please Putin suggest behind-the-scene dealings that would make them highly vulnerable to exposure.

Mustafa Dzhemiliev, the veteran Crimean Tatar leader, banned from his native Crimea shortly after Russia’s invasion, was scathing in his response to the proposed ‘deal’.  With respect to Hunter’s attempt to claim justification for ‘giving up’ Crimea because there are a lot of Russians there, Dzhemiliev suggested asking the congressman why they don’t cede California to Mexico.

“Accepting annexation and occupation on the grounds that somebody took a fancy to the land, and reconciling oneself with this would be a catastrophe for world order”.

Dzhemiliev is right that Ukraine could not, under any circumstances, accept such a deal.

Judging by Trump’s responses when challenged on the murders of journalists and opponents under Putin and Russia’s invasion of other countries’ territory, moral considerations are not a major factor for him.  This is not a position that the USA should be emulating.

The human rights situation since Russia invaded Crimea has become critical.  It has become dangerous to express pro-Ukrainian views, with Crimean Tatar leader Ilmi Umerov and journalist Mykola Semena both facing 5-year sentences effectively for saying that Russia should leave Crimea.  19 Crimean Muslims, including a human rights activist are imprisoned, facing long sentences on unsubstantiated charges of merely belonging to an organization which is legal in Ukraine.  Crimean Tatar leader Akhtem Chiygoz and other Crimean Tatars are in prison, accused of taking part in a demonstration which took place before Russia’s annexation and over which Russia can have no jurisdiction.  Russia is holding Ukrainian political prisoners like filmmaker Oleg Sentsov and Oleksandr Kolchenko thousands of kilometres away from their families and continuing to try to foist Russian citizenship on them.  These are just some of a mounting number of arrests. Russia has also banned the Crimean Tatar Mejlis, or self-governing body of the main indigenous people of Crimea, with this now placing a very large number of Crimean Tatars in danger of arrest. The latest abduction and disappearance, this time of Crimean Tatar activist Ervin Ibragimov, indicate that there are no measures that will not be applied against those Russia views as ‘dissident’.  Human rights groups are now warning Ukrainians to avoid going to Crimea unless they have no choice.  The Crimean Human Rights Group has even published a list of recommendations, advising people, for example, to leave laptops and mobile phones at home and close all social network pages, since the FSB, Russia’s security service can use them to find ‘incriminating’ views about Russia’s occupation of Crimea, etc.

All of this is very well documented.  Since the Chief Prosecutor of the International Criminal Court in the Hague has accepted that Russia’s occupation of Crimea is an international military conflict, crimes committed by Russia as the occupying state could well be deemed war crimes.

Moscow has spent a huge amount of money and effort supporting far-right, extreme left or other parties in Europe and beyond with a pronounced pro-Russian, anti-EU and NATO position.  All of these parties speak out against sanctions and justify Russia’s occupation of Crimea, and for the current regime in Russia, this is a good ‘investment’.

It will be a disaster for everybody, and most of all America itself, if Russia’s lobbying and other means of influence on Trump and his team prove its best investment.