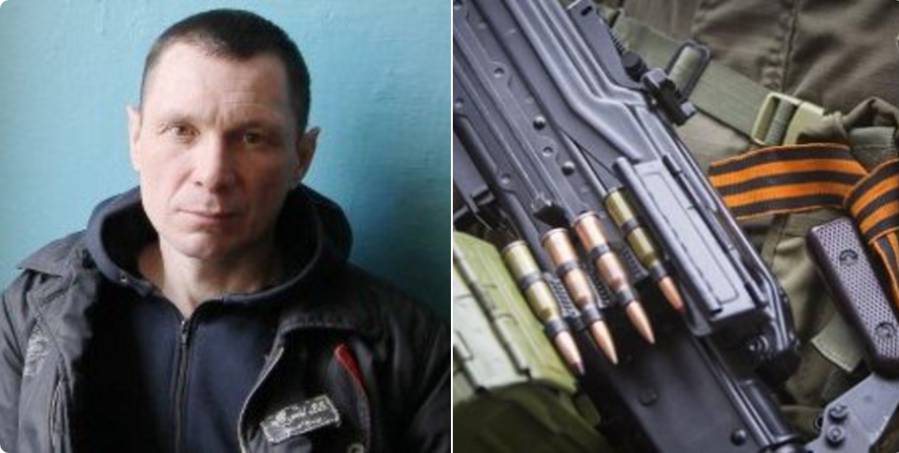 42-year-old Radyuk has a Ukrainian name, but is himself from Omsk in Siberia. During his military service in the early 1990s, Radyuk became a specialist in portable air-defence systems.  This was of little use in civilian life and the young men ended up unemployed and in trouble with the police.  By early 2014, he had served two sentences (for theft and robbery) and was still under police surveillance.

In May 2014, he was visited by two men in plain clothes who showed Russian Security Service [FSB] ID. They proposed that he undergo military training in the Rostov oblast.

In an interview given to Oleksandr Stepanenko from a Ternopil oblast prison in May 2016, Radyuk explained that he had understood immediately what this was about, though he himself did not share the war hysteria being fuelled by the Russian propaganda machine and did not support President Vladimir Putin’s regime.

Sloviansk had been seized by militants under the control of Russian former military intelligence officer Igor Girkin (nom de guerre Strelkov].  “Girkin was complaining of a lack of ‘volunteers’ and of the unwillingness shown by local residents to fight”, Radyuk recounts.

It was Russia’s FSB who appeared at Radyuk’s home to recruit him as such a ‘volunteer’.  He asked if he could refuse, and understood from the way they said “sure, you try to refuse”, that there was no way of resisting the FSB.

He was told to sign a piece of paper and get ready, and that he would be met in Rostov.

He was indeed met, by two more FSB officers who took him to a mini-van where other young men were already waiting.

They were taken to a Russian Emergencies Ministry training base where the instructors were professional military officers, overseen by FSB men.  It was all under strict conditions of conspiracy, of course, with the trainers, etc. all referred to by a nom de guerre, with no mention of their real names and military rank.

Radyuk became ‘Matros’, or sailor, since he had earlier served in a fleet.

There was even ‘ideological training’, he says, with the men being shown supposed ‘documentaries’ about what the Kremlin was calling the ‘fascist coup’ in Kyiv and alleged “Ukrainian butchers bombing peaceful Donbas”.

Radyuk asserts that he had retained his contacts with Ukrainian friends and understood that the situation was much more complex.  He says, however, that the propaganda worked on most of the young men he was training with.

The training lasted for a month, and in June the men were sent into Donbas, across the part of the border controlled on one side by Russian border guards, the other by the Kremlin-backed militants.

Radyuk says that his specialization was not needed since “Ukrainian aviation was almost not flying in the second half of June 2014”.  This contradicts the Russian propaganda line. as well as the Russian attempts to claim that it was Ukraine who downed Malaysian passenger airliner MH17 over militant-controlled Donbas on July 17, 2014.

Radyuk became part of the so-called ‘Donetsk people’s republic’s’ [DNR] 2nd Semenivka Battalion, responsible for guarding the border crossing near Izavin.  He says that he himself saw around 200 pieces of military technology being brought into Donbas from Russia.  He also witnessed several shelling attacks on Ukrainian territory by Russian heavy artillery and Grad missiles from across the border.

He asserts that his own military engagement at that time was over a property dispute between so-called DNR fighters and ‘Don Cossacks.

He was aware, he says, of the criminal nature of the war, in which the fighters were mainly concerned about what they could plunder while the civilian population continued to suffer.  He is convinced that any discipline and military capacity in the so-called ‘DNR army’ comes solely from the Russian military servicemen.  Without Russian commanders, he says, the militants in this ‘army’ would have already killed each other.

Later he was moved to Donetsk to guard the seized SBU [Ukrainian Security Service] building where Alexander Zakharchenko,  then called the ‘DNR interior minister’ held his ‘offices’.  The building is notorious for the basements where Ukrainian hostages and captured soldiers were – and are - held and often tortured.

Radyuk says that he knows of numerous cases where civilians were tortured.

He claims that he was already then just waiting for an opportunity to flee and change allegiance.  In August, however, he was sent to the Donetsk Airport and came under shelling.  He was in hospital for several weeks, and after that began seriously preparing his flight.  He says that he tried to get other Russian soldiers to join him.  They refused, saying that they’d wait to see how he was received by the Ukrainian Army and then decide.

They did, however, advise him where to try his escape, with the reason also of importance.  They told him to try the Debaltseve area since the active movement of armed forces and concentration of military technology suggested that Russia was planning a military operation on the eve of the Minsk Accords.  They thought he’d had more chance of not being noticed.

Radyuk fled to a Ukrainian checkpoint in the early hours of Oct 14, 2014.  He was in full military gear, and had two automatic rifles with him, which he handed over, asking the men to wake up the commander.

The latter, known as ‘Angel’, and from Lviv, almost apologized for having to hand him over to the SBU and gave him his word as an officer that the SBU would not ill-treat him.

The SBU’s problems, not only with honour

The decent treatment Radyuk received from the Ukrainian soldiers at the checkpoint was not repeated by the SBU.  Radyuk says that some of the ways of speaking, as well as the methods used – being held for hours with a bag over his head in the basement, awaiting interrogation, were like those he’d seen from the militants.

The SBU also produced a video in which they claimed that Radyuk had been ‘captured’.  He calls this a total lie, and says that the so-called ‘capture’ took place while he was sitting, quietly talking with the Lviv commander.

During the 6 months before his trial, the SBU three times offered to exchange him for Ukrainian hostages held by the DNR militants.

He refused each time, stating clearly that he had no intention of returning either to ‘DNR’, or to Russia.

He was sentenced in May 2015 to 3 years’ imprisonment for his involvement in an illegal military formation and illegal possession of arms.  His prison term has not been entirely without brighter moments – he has, for example, married, with his wife a Ukrainian woman living in Dnipro.

Radyuk himself is more than willing to testify, even in international courts about the grounds he witnessed for accusing Russia and pro-Russian militants of war crimes or crimes against humanity.  The SBU has, incredibly, shown no interest in talking to Radyuk about what he knows.

There is, however, worse.  The SBU’s wish to trumpet its fictitious capture of a man who had himself surrendered attracted Russian attention to Radyuk.  Back in January 2015, it came up with an extradition request, claiming that Radyuk is wanted for theft in Russia.  Ukraine’s authorities work in mysterious ways.  The Justice Ministry actually agreed to the extradition, albeit after Radyuk serves his sentence or “is released on lawful grounds”.

By that time, KHPG Director Yevhen Zakharov reports, Radyuk had already received a refusal from the Migration Service to consider his application for refugee status.  This has been appealed at various levels, and that battle is still in progress.  After Radyuk lodged an appeal against the extradition order, a judge cancelled it pending the final decision regarding Radyuk’s asylum application.

There have been baffling indications in recent months of collaboration between the SBU and FSB, as seen with the attempts to extradite Ruslan Meyriev on highly questionable grounds.  Zakharov reports that Radyuk has just received a visit from an SBU officer and a Russian official, probably from the FSB.  Both men tried to get Radyuk to agree to be exchanged, with the Russian dismissing Radyuk’s categorical refusal and saying that the exchange would take place.

The Kremlin-backed militants have consistently refused to comply with the Minsk Agreement which demands an all-for-all release of hostages.  When they do release hostages, they often make unreasonable demands regarding the number of people Ukraine should release, who should be released, etc.  They also work to orders from Russia and it is quite conceivable that Russia would try to get Radyuk’s ‘release’ into militant / Russian hands.

Radyuk voluntarily surrendered, and cannot possibly be handed over against his will and in a situation where there are real grounds for believing he would face torture or worse.  Instead of collaborating with the security service of an aggressor state, the SBU should be helping Radyuk to ensure that Russia and its proxies answer for the crimes committed during Moscow’s undeclared war against Ukraine.